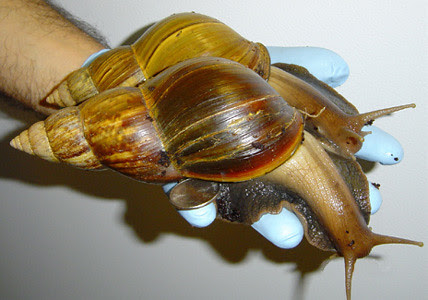 
An African snail appears to be on a campaign to conquer central and southern America. But how much mess can a mollusc make - and are they really deadly to humans?

At an average size of just a couple of inches long, the so-called giant African land snail (Achatina fulica) probably wouldn't qualify for a starring role in a 1950s horror film, but it is still wreaking havoc in several South American countries and the US state of Florida.

The threat lies in its ability to multiply at enormous speed. The snails reach maturity after a year and can then produce 200-300 eggs a month, leading to huge infestations within a short space of time. The snails, which are native to East Africa, appear on the International Union for Conservation of Nature's list of the world's top 100 invasive species.

Actually, the biggest threat this snail poses comes from the measures people use to get rid of it. The worst one involves importing predatory snails and flatworms to control its population. The snail predators usually find the native snails easier prey than the Giant African snails. On the Hawaiian Islands, the deliberately introduced Rosy Wolf Snail helped drive most of the native Hawaiian snails to extinction during the late 20th Century, while the Giant African Snail still roams the islands.

The worst part of all this is that it is an example of history repeating. The Indian Mongoose was introduced to Hawaii the 1880s to control rats. That didn't work out as planned, because the mongooses figured out that the native birds were easier pickings than the rats. Most of the native birds went extinct, although the mongooses had help from overhunting the birds for their feathers and habitat destruction. Obviously, people didn't learn the first time.

And, yes, this is a story I tell my students. In fact, I've already put it in my slideshow for my lecture on Monday.