.Yesterday, my car's odometer turned over 213,000 miles, another 1000 since the previous update in May. Since that's 97 days, I drove less per day than I did during the previous three months, 10.3 miles/day compared to 11.4 miles/day then. Hey, I drove a mile less per day! Using 30.5 day months, that converts to 311.4 miles/month. I am still contributing to the nation's long-term decrease in miles driven, as shown by this graph from Calculated Risk, which I included in my lecture this week to my geology and environmental science classes to demonstrate the effect of higher gas prices on the economy. 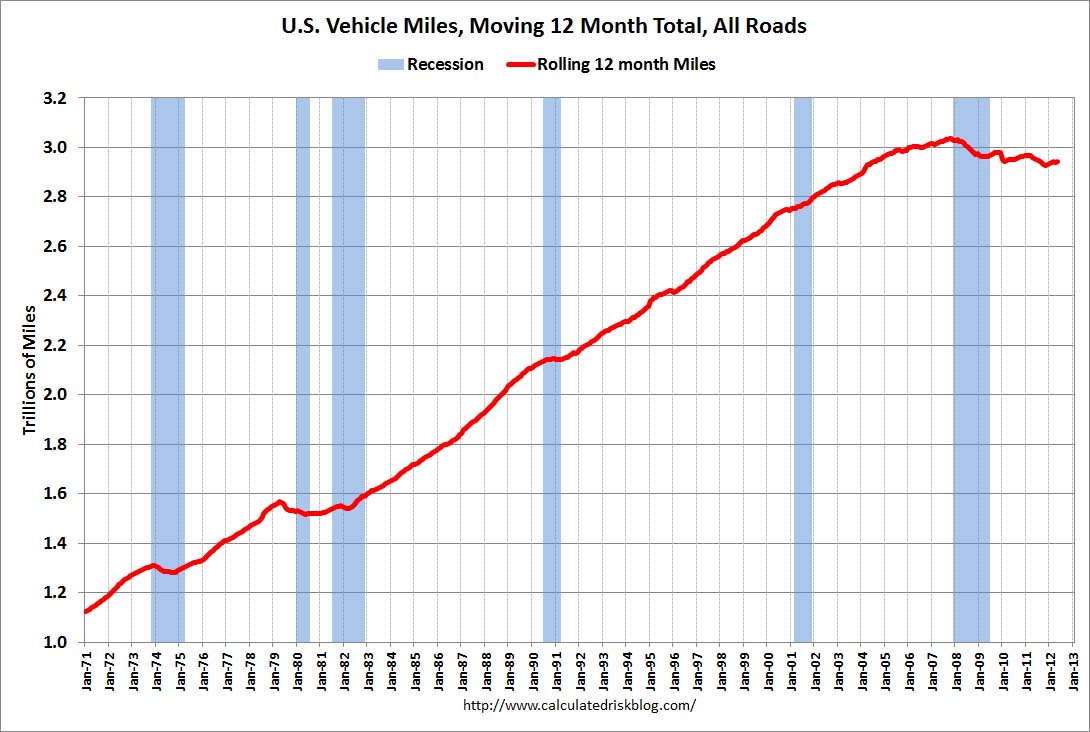 I'm driving less because I have fewer meetings to go to during the summer that require a special driving trip. I'd probably have driven even fewer miles if it hadn't been so hot during late May and June. That really discouraged me from walking. July was also hot, but I can't use that for an excuse because last July was even hotter.

As for why the nation has been driving less, the price of gasoline is going back up. Calculated Risk posted yesterday that gasoline prices are down from the peak in early April, but up about 20 cents over the last five weeks. That's the national average. Here in Detroit, it's even worse, as WXYZ reported a few days ago.


No surprise, WOOD-TV was even more on top of the story,* posting that gas may hit $4/gal Thursday on Wednesday night.


What's happening is that Michigan is experiencing a spike caused by refinery and pipeline problems on top of the national rise in prices resulting from rising crude oil prices--and quite a spike it is, too. When I last wrote about local gas prices, the price at the corner station and all of its nearest competitors was $3.59. The next week, the corner station raised its price to $3.75, where it remained for a day while the rest of its competitors held their prices at $3.59. The corner station then dropped its price back to $3.59. A few days later, all of the stations were selling gas at $3.75. Then, last Thursday, as WOOD-TV forecast, all the stations around here raised their prices to $3.99. Wow, a 40 cent jump in two weeks! That's not sweet at all.

*I find that WOOD-TV consistently has more intelligent reporting on the economy in general and gas prices in particular than WXYZ, although the latter gets better sound bites from the people it interviews. It evens out, which is why I subscribe to both of their YouTube channels.
Posted by Pinku-Sensei at 12:26 AM