Food prices and unrest, a story I tell my students 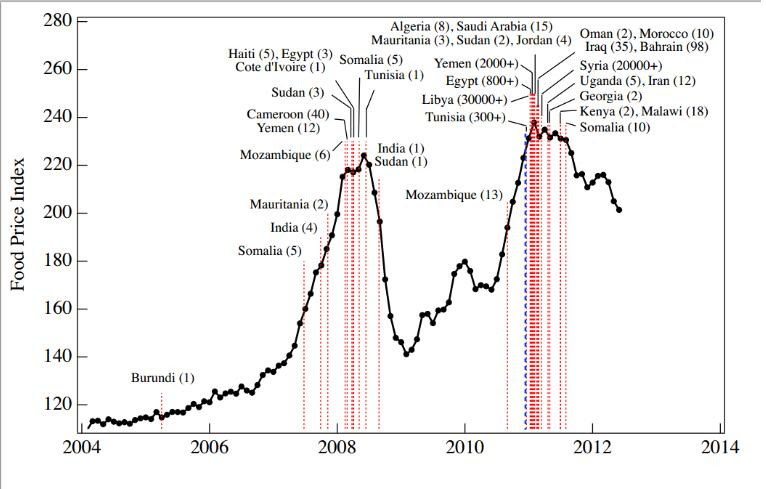 Yesterday, I showed my students the most important graphic from Vice's The Math That Predicted the Revolutions Sweeping the Globe Right Now, which I linked to in Third American doctor infected and other Ebola news.


It's happening in Ukraine, Venezuela, Thailand, Bosnia, Syria, and beyond. Revolutions, unrest, and riots are sweeping the globe. The near-simultaneous eruption of violent protest can seem random and chaotic; inevitable symptoms of an unstable world. But there's at least one common thread between the disparate nations, cultures, and people in conflict, one element that has demonstrably proven to make these uprisings more likely: high global food prices.

Just over a year ago, complex systems theorists at the New England Complex Systems Institute warned us that if food prices continued to climb, so too would the likelihood that there would be riots across the globe. Sure enough, we're seeing them now. The paper's author, Yaneer Bar-Yam, charted the rise in the FAO food price index—a measure the UN uses to map the cost of food over time—and found that whenever it rose above 210, riots broke out worldwide. It happened in 2008 after the economic collapse, and again in 2011, when a Tunisian street vendor who could no longer feed his family set himself on fire in protest.

Bar-Yam built a model with the data, which then predicted that something like the Arab Spring would ensue just weeks before it did. Four days before Mohammed Bouazizi's self-immolation helped ignite the revolution that would spread across the region, NECSI submitted a government report that highlighted the risk that rising food prices posed to global stability. Now, the model has once again proven prescient—2013 saw the third-highest food prices on record, and that's when the seeds for the conflicts across the world were sown.

"I have a long list of the countries that have had major social unrest in the past 18 months consistent with our projections," Bar-Yam tells me. "The food prices are surely a major contributor---our analysis says that 210 on the FAO index is the boiling point and we have been hovering there for the past 18 months."

None of this should be news.  Food riots have been the start of revolutions in the modern world going at least as far back as the French Revolution, as I pointed out in Today is the anniversary of the Women's March on Versailles.  Still, it's a lesson that bears repeating--starving poor people under a repressive regime is a recipe for disaster.

Follow over the jump for more, including an update on the graphs.

I also mentioned the following when I told my students about this research.


Here's the list of the countries Bar-Yam has cited as suffering from unrest related to the rise in the cost of eating:

One of my students said, "It sounds like the news."  Yes, it does.  The good news is that this article was from February, and food prices were predicted to go down.  The bad news is that the unstability high food prices have caused is, if anything, getting worse, at least in Syria and Ukraine.

The graph at the top of the entry shows where things stood just as the Arab Spring got underway.  Here's a cleaned up version that highlights the most important events and extends the price index through 2012. 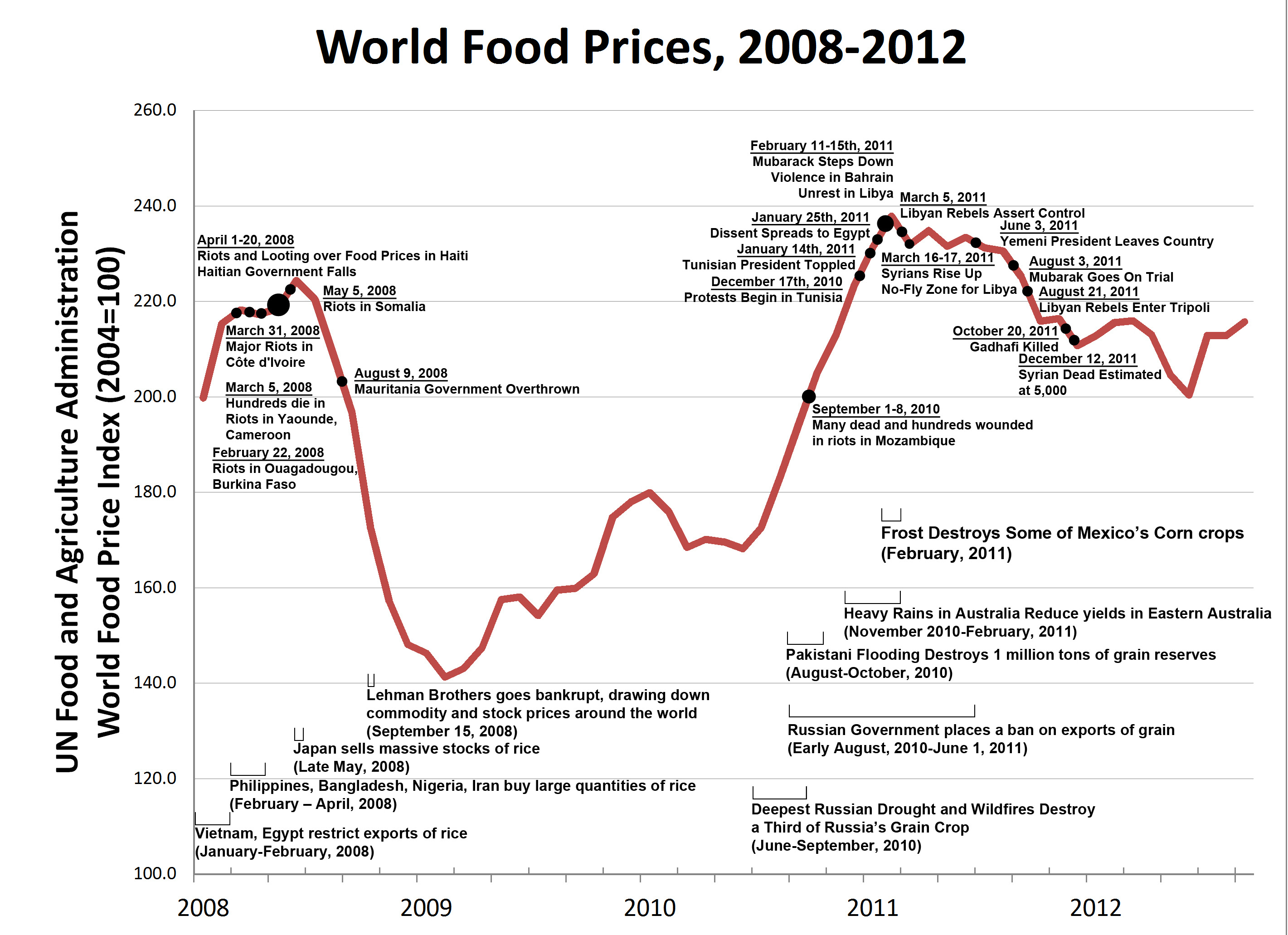 Finally, here's another graph that takes the FAO price index up to today.

Even if prices drop, they'll likely be too high to stop fueling the unrest that is already happening.
Posted by Pinku-Sensei at 8:55 PM