Marching bands of the zombie apocalypse

For my Sunday entertainment entry, I'm going to take advantage of my status as probably the only doomer blogger who writes about marching bands and drum corps to present marching band shows with zombie themes.  If nothing else, they demonstrate how pervasive the idea of a zombie apocalypse as popularized by the show "The Walking Dead" has become.

I begin with the Ferndale Marching Band - Puget Sound Festival of Bands 2013.

Performing at the Everett Memorial Stadium on Oct. 26th, 2013, the Ferndale Marching Band put on a show like no other. Zombies, intense music, classic marching, drama, dancing, special effects, and even the iconic, Michael Jackson's Thriller. All around pure entertainment. Worth the watch.

Unfortunately, this isn't Ferndale, Michigan, but Ferndale, Washington.  However, I've seen the local Ferndale H.S. band and this is a show they could carry off.

Follow over the jump for more marching bands of the zombie apocalypse AKA "The Marching Dead."

The Rio Hondo High School Marching Band performing the theme to The Walking Dead. I missed the intro, which was pretty cool. They had the intro to Imagine Dragons "RadioActive" playing while they set up the field. As they finished setting up the field they had a siren like an Emergency Broadcast which said people were getting flu like virus that was not human and reports of people eating people not to leave the stadium as the color guard walked around limp trying to eat the others. This is about two thirds of their performance. My arm was getting tired of holding up my Iphone to record and trying to stay as still as possible. I apologize for shaking so much. At the end of their performance, the color guard got into the stands acting like zombies.

For a complete performance, including the emergency warning, click on Rio Hondo High School Marching Band 2013 The Walking Dead.  I'd embed it, but the sound is terrible.  It was recorded during a windy day and every gust is audible.

Next, the Early High School Band performs 'How to Survive a Zombie Apocalypse.'


That was technically proficient, but not very emotionally engaging.  Here's a performance that gave me the chills, The O'Connor Panther Band " Zombie Apocalypse".


For an outdoor performance, I recommend this one, but it lacks the warning announcement in the embedded video.  One of those, plus "The Walking Dead" and "Thriller," makes a complete zombie show, and this show has all of them.  It's enough to make me stop now.

So, if those were last year's offerings, what will this year bring? 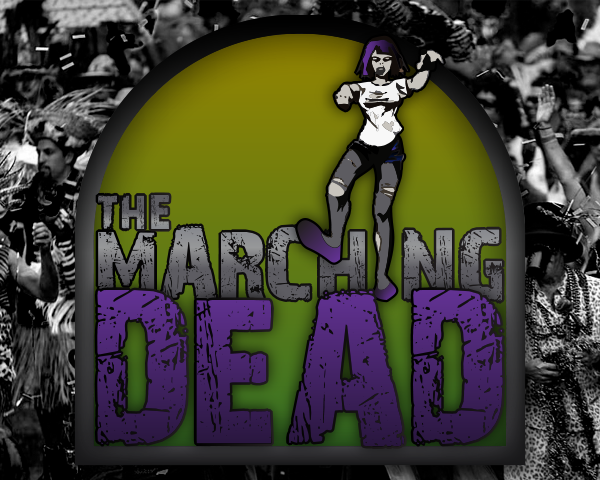