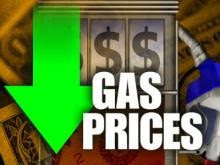 Here's what I wrote about the state of the neighborhood gas price was in Gas returns to being lower year-over-year.

I was right.  By this evening, all the neighborhood stations had lowered their price to $3.39.  Hey, a dime drop in two days, not next week--I'll take that!

That was Wednesday evening.  As of Friday, the three stations down the block lowered their price to $3.37.  On Saturday morning, the corner station joined them, only to have the other three neighborhood outlets drop their price to $3.35.  As of Sunday, the corner station had joined them.  That means gas prices are where they were two weeks ago, a month ago, eight weeks ago, and two months ago.  When I predicted price resistance at $3.35 near the end of July, I didn't expect it to go on this long!

Despite the repeated bouncing off the floor, gas prices are still lower than at this time last year, when they were at $3.39.  I'd post Professor Farnsworth, except I'm waiting for all four stations to lower prices to $3.32 or below.  After that, it's the limbo kitty's turn.

Speaking of bouncing off the floor, that's the picture GasBuddy paints for national gas prices.  The national average has finally returned to $3.33, where it was on September 22nd.  The Detroit average has finally fallen below $3.38, which it bounced off of twice since July, to $3.37.  The stations down the street could conceivably lower their prices to $3.29 this week, as I predicted a while ago.  In fact, they're getting pressure to do so already, as a station a mile down the road is advertising regular for $3.33 cash.  Stay tuned.
Posted by Pinku-Sensei at 1:41 AM