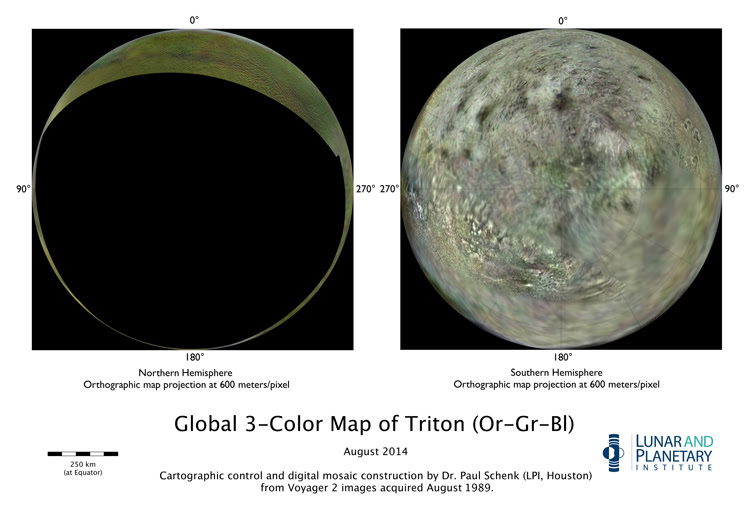 Time for another post in the spirit of Decade: Cassini arrives at Saturn.  This time, it's a 25th anniversary of an encounter, that of Voyager 2 Sailing Past Neptune's Moon Triton from JPL.

Sail past Neptune's moon Triton, with data obtained from NASA's Voyager 2 spacecraft in 1989. The historical footage has been restored and used to construct the best-ever global color map of the strange moon.
The new Triton map has a resolution of 1,970 feet (600 meters) per pixel. The colors have been enhanced to bring out contrast but are a close approximation to Triton's natural colors. Voyager's "eyes" saw in colors slightly different from human eyes, and this map was produced using orange, green and blue filter images.

In 1989, most of the northern hemisphere was in darkness and unseen by Voyager. Because of the speed of Voyager's visit and the slow rotation of Triton, only one hemisphere was seen clearly at close distance. The rest of the surface was either in darkness or seen as blurry markings.

One can still get new information out of quarter-century-old data.

That's one installment in the promise I made in September 2014 in space and skywatching to resume posting space and astronomy updates.  As this was from Overnight News Digest: Science Saturday (Bardarbunga eruption), which was from three weeks ago, it looks like I have a lot of catching up to do.
Posted by Pinku-Sensei at 5:37 PM