Corn for fuel, a story I tell my students

I opened Biofuel crops can be good for the environment and other biofuels research with my opinion of using corn for fuel.


Normally, I'm skeptical about biofuels, but that's primarily because the main biofuel in the U.S. is corn ethanol, which I have characterized for years as an energy independence strategy, not a sustainability strategy.  It doesn't help that pretty much all the increased corn production during the past decade has gone into gas tanks.

Here's an updated version of the graph I show my students that displays how much corn goes to each purpose, including how all the growth in the crop and then some has gone into our gas tanks.

The point I make is even more clear in this graph.

The other point I make about corn ethanol is about its wastefulness.


In one of the first entries on this blog, I described "converting corn into ethanol" as "a big energy loser."

This is the figure from The Oil Drum I show my students to support my statement. 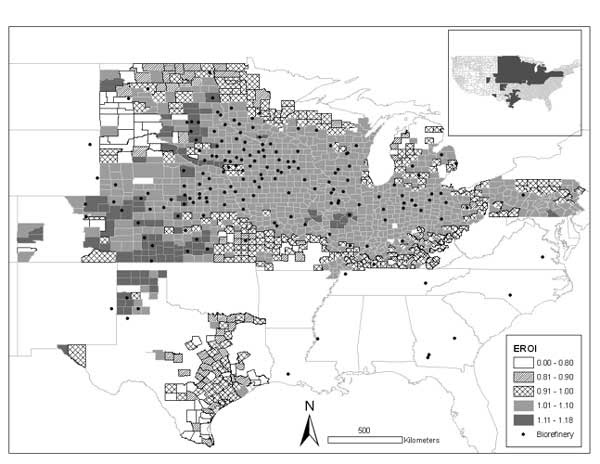 Only in the counties shaded in solid gray did corn ethanol yield more energy than it took to produce it.  In all the rest, it was a net energy loser.

Both of the above are why I think using corn grain for for ethanol fuel is a bad idea and why I am enthused about growing other crops with uses that don't compete for food and feed for biofuels.

On the subject of corn, I showed "Food, Inc." to my students this week.  Stay tuned for a post about the questions about corn from my worksheet for that movie.
Posted by Pinku-Sensei at 8:14 PM