The science of peanut allergies 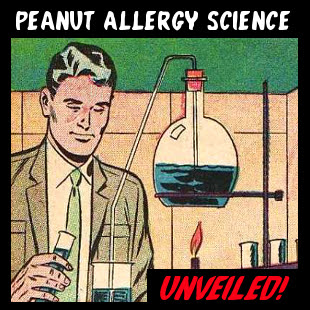 Once again, I'm in an "I can't be all DOOM all the time" mood.  Fortunately, I collected three stories for Overnight News Digest: Science Saturday (Ebola in the U.S.) on a common theme that suits my mood, the science of peanuts, particularly peanut allergies.

Peanut allergies are becoming more and more common, and researchers are trying to find the cause. Trace is here to discuss this unique allergy, and how we might have finally found a cure.

Discovery News cited a University of Florida study about one of their scientists working on eliminating the source of the problem.  Here's the press release: UF/IFAS researcher continues quest for peanut that won't cause allergic reaction.


GAINESVILLE, Fla. --- A University of Florida scientist has moved one step closer to his goal of eliminating 99.9 percent of peanut allergens by removing 80 percent of them in whole peanuts.

Scientists must eliminate peanut allergens below a certain threshold for patients to be safe, said Wade Yang, an assistant professor in food science and human nutrition and member of UF’s Institute of Food and Agricultural Sciences.

If Yang can cut the allergens from 150 milligrams of protein per peanut to below 1.5 milligrams, 95 percent of those with peanut allergies would be safe. It’s challenging to eliminate all peanut allergens, he said, because doing so may risk destroying peanuts’ texture, color, flavor and nutrition. But he said he’s using novel methods like pulsed light to reach an allergen level that will protect most people.

Looks like good news, but no Professor Farnsworth yet.

Peanut allergies weren't the only topic covered in last week's Science Digest on Daily Kos.  Follow over the fold for a press release from the University of Georgia on how to convert peanut skins from waste into a useful product.


Athens, Ga. - The United States grows about 3 million metric tons of peanuts per year and uses 60 percent of that amount to make nearly 1.2 billion pounds of peanut butter. Before the legumes are ground to a spreadable consistency, machines first shake off each peanut's thin, papery skin. The skins are then thrown away.

A new study from the University of Georgia published in the journal LWT - Food Science and Technology has found a way to incorporate peanut skins—which are high in antioxidants and dietary fiber—back into peanut butter.

Ruthann Swanson, an associate professor in the College of Family and Consumer Sciences department of foods and nutrition, is leading the team of UGA researchers who found that peanut skins can be incorporated into traditional peanut butter with potentially surprising results.

"What has happened in recent years is a movement toward healthier products in general, including nut butters, and an increased emphasis on natural products, and the peanut butters that contain some skin particles are perceived to be more natural by the consumer," Swanson said.

The researchers include food scientists William Kerr and Ron Pegg in the College of Agricultural and Environmental Sciences and James Hargrove, a professor emeritus in the department of foods and nutrition.

"We found we can do this, and people found it to be acceptable," Swanson said.

Sounds like it will nutritious and even tasty.  As someone one who loves peanut butter, perhaps a little too much, I'm looking forward to the results.