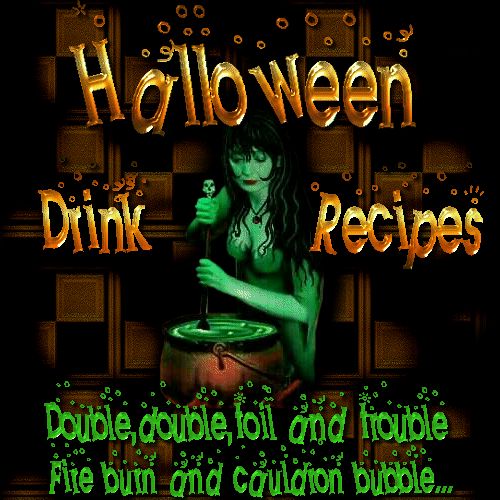 Happy Halloween, at least for those of my readers in the Western Hemisphere!*  This year, I'm marking the holiday with the five six most recent drink recipes for the holiday from the Tipsy Bartender, beginning with the first one posted, Ez-Squeeze Candy Corn Jello Shots - (Halloween).

Skyy, Cecilia, and Bobbi are having way too much fun in the outtakes.  I'm not embedding it, so you'll have to click on the window yourself to see it.

Follow over the jump for the other five videos, where you can enjoy both the booze and the women (and in the next to last, Skyy himself) wearing their Halloween costumes.  I also included a bonus science history lesson after the next video.

A deathly evil looking foaming punch that's loaded with booze and perfect for your Halloween party!

At about 0:52, Nikki asked who invented dry ice.  I answered in the comments:


Nikki, you asked who invented dry ice.  According to Wikipedia, the answer is Adrien-Jean-Pierre Thilorier, a French chemist.  He first created it in 1835--by accident.

Here's the relevant section of his entry.

At the Oct. 12, 1835 meeting of the French Academy of Sciences, a letter from Adrien Thilorier was read in which he stated that he had solidified carbon dioxide:[31]

Translation: If one directs a jet of [liquid] carbonic acid [i.e., carbon dioxide] into the interior of a small glass vial, it quickly fills, and almost completely, with a material [that is] white, powdery, fluffy, which adheres strongly to the walls [of the vial], and which one can remove only by breaking the bottle.

What is particularly interesting about Thilorier's discovery of dry ice is that he did not realize that he had solidified carbon dioxide until a group of scientists from the French Academy of Sciences explained to him what he had accomplished:[32]

Translation: Mr. Thénard [i.e., French chemist Louis Jacques Thénard (1777 – 1857)] noted that Mr. Thilorier had still not imagined, at the time of the visit of commissioners of the Academy, that the whitish substance obtained by him was solid carbonic acid. This fact, he says, was recognized and noted by the committee: it is they who submitted the acid to most of the experiments cited by the author [i.e., Thilorier].

Thilorier thought that the liquid carbon dioxide had caused water vapor in the air to freeze on the vial; he was puzzled when the "snow" sublimated instead of melting.[33]

Thilorier reported to the French Academy of Sciences the properties of solid carbon dioxide. News of Thilorier's achievement was published not only within France but in Germany, Britain, and the United States.[34]

The French positivist Auguste Comte was so impressed by Thilorier's investigations of gases that he devoted the twentieth day of the ninth month of his positivist calendar to British chemist John Dalton -- and to Thilorier.[35]

When dry ice was mixed with diethyl ether, it was called "Thilorier's mixture",[36][37] presumably since Thilorier had noted in 1835 that a mixture of liquid carbon dioxide and ether produced extreme cold when sprayed on objects.[38] It was subsequently found that under reduced pressure, temperatures as low as -110°C could be maintained.[39] These mixtures ("dry ice baths") could thus be used to maintain low temperatures during experiments.

Yes, I managed to insert some history and science into this otherwise silly post.  Yay, me!

A Zombified version of a scooby snack! It's looks disgusting but it's delicious and perfect for Halloween.

Jules did well in her first video.

The ever-popular Inna is the co-hostess of Drunken Dirt Worms - (Halloween).

A booze filled Halloween adult treat...Drunken Dirt Worms! Looks like worms crawling out of the soil.

In case you're wondering what Inna's costume is, it's a pink fairy, as she explains in the Outtakes.  I'll embed that in a future entry, as it ties into another topic.  Stay tuned.  In the meantime, as a fellow dachshund owner, I love her dog!

Booze filled cupcakes that look as if they bloody after falling through a window pane!

GLASS CANDY
3 1/2 Cups Sugar
1 Cup Corn Syrup
2 Cups Water
1/4 tsp. Cream of Tartar
*Cook ingredients on a low heat until it reaches a temp of 290 degrees (use a candy thermometer to measure heat). Pour onto a greased cookie tray to harden.

I like that Skyy has added cooking to his recipes.

DC had its turn, now Marvel.

With that, happy Halloween!

*In case anyone is wondering why I waited until this late to post a Halloween entry, I refer them back to 10th worst storm in DTE history.


Intervals of 24 hours or more between entries during the last week of the month are not unusual here.  That's because I've reached my readership goals for the month and am just coasting along at one entry per day.  Should you see that happen this month, you'll know why.

I reached my page view goal two days ago and have been two days ahead since Canadian Thanksgiving, a post that has 380 page views so far.  In addition to only writing one entry today, I decided to wait until Midnight Greenwich Time, so that it would add to November's readership stats.  November is the one month of the year in which this blog has never had 10,000+ page views, and I want to make sure that I reach that goal this year.
Posted by Pinku-Sensei at 8:00 PM