Polar vortex and the economy 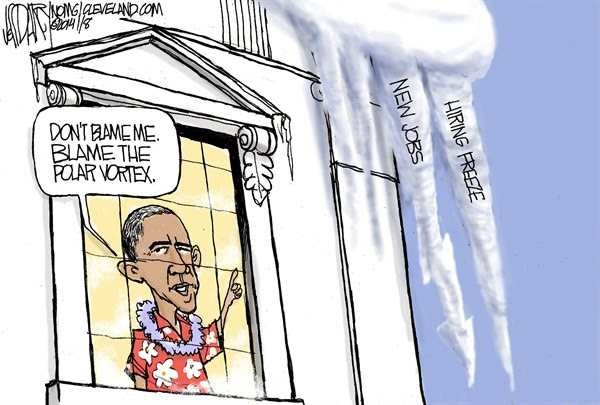 With the return of cold weather this week, it's time to follow up on Weather and the economy for February 2014 with an article from Northern Illinois University that I included in last Saturday's Overnight News Digest: Science Saturday (Philae lands on comet) on Daily Kos.


With the unseasonably frigid air this week, memories resurfaced of last winter’s biting cold, brought on by the dreaded polar vortex.

But as NIU climatologist David Changnon points out, it’s not simply the cold that makes us miserable.

Changnon, who has been studying the impacts of last winter for an upcoming publication, can describe the countless ways in which the winter hurt, ranging from U.S. flight delays and Great Lakes shipping slowdowns to a plethora of potholes and water main breaks.

It all amounted to an economic punch in the nose.

“For a national economy still recovering from the damaging recession of 2008, last winter helped to create a significant setback,” says Changnon, a Board of Trustees Professor from NIU’s Department of Geography.

“Economists reported that half of the economic slowdown last winter was due to the bad weather conditions. For example, Ford attributed $100 million in losses to the winter. Because more people stayed inside due to the extremely cold conditions and reduced their spending, the national GNP shrank at an annual rate of 2.1 percent from January to March.”

That was last winter.  What about the current cold snap, which sent the thermometer in the new car down to 16F on the drive home?


Changnon says the impact of the November 2014 polar vortex should be minimal, because it’s not occurring in the heart of winter. It’s unclear whether it is a predictor of the winter to come.

“This may be the only major polar vortex event of the entire cold season,” Changnon said. “Since the complex factors that create such a scenario can change independent of one another and at different time scales, it is just hard to say.

“However, one of the main causes for last year’s frequent occurrence of the polar vortex, a large body of ocean with above average sea-surface water temperatures in the north Pacific, still exists. So many long-range winter forecasters feel like the probabilities are weighted toward a number of polar vortex events this cold season. It might not be as extreme as last year, but we might see more of the polar vortex than we typically experience.”