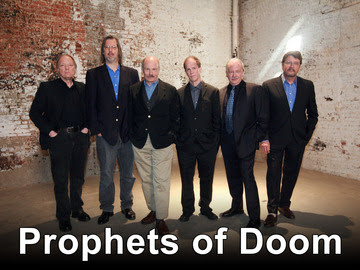 I opened U.S. home ownership rate and me with a warning of sorts:  "For those of my readers expecting an entertainment post, stay tuned; I'll get to it eventually."  After I wrote that, I went upstairs to clean the living and dining rooms for the real estate agent and turned on the television to entertain me while I straightened up.  While I was clicking through the channels, I came across "Prophets of Doom" on H2 (History Channel 2).  I read the description and wondered if any of the people I read were among those featured.  Sure enough, the first person I see interviewed was James Howard Kunstler.  Another was the late Michael Ruppert.  That was enough to keep me watching.

The rest of the subjects I didn't know, but David Ing listed them.

Both Kunstler and Ruppert gave their familiar peak oil perspectives on the future.  Of the rest, the one who worried about the farthest off catastrophe was De Garis, whose fear was of The Singularity, the surpassing of human intelligence by artificial intelligence.  When he discussed his take on the future, I figured that Kunstler would likely have none of it.  Sure enough, he told De Garis that he thought that the resources and finances needed to support the research for artificial intelligence would dry up before the technology reached that point.  The result was that Kunstler didn't budge, but De Garis came away convinced that the other issues were fair more pressing than his particular worry.  In particular, he became most concerned about water shortages.

All in all, I found watching the documentary time well-spent.  If you want to see it, follow over the jump for the embedded video from YouTube.


Should this upload be taken down, there is another copy here.