A bad week for private space 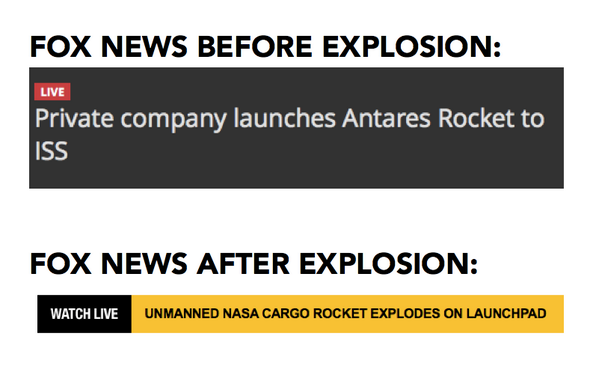 At the end of Set back your clocks, including the ones for insulin pumps, I told my readers to "stay tuned for the Sunday entertainment entry."  It's still coming, probably at 7 PM EST.*  In the meantime, I present a double dose of minor DOOM for proponents of continued crewed spaceflight, the top stories from last night's Overnight News Digest: Science Saturday (A bad week for private space) on Daily Kos.

First, both because it happened first and because if it moves, it leads, Discovery News asks Why Did The Antares Rocket Explode?

Last night, a private Orbital Sciences rocket set to deliver cargo to the International Space Station exploded seconds after liftoff. Why did this happen, and what did we lose? Trace and Amy are here to discuss.

That was the first disaster.  NBC News reported on the second, which followed on its heels.

Virgin Galactic founder Richard Branson said his team is dedicated to finding out what led to Friday's fatal test flight of the SpaceShipTwo rocket plane, and that he and millions of supporters of commercial space travel "would like to see the dream living on."

The National Transportation Safety Board began its investigation Saturday into what led to the explosion over California's Mojave Desert that killed one pilot, identified as 39-year-old Michael Alsbury, and injured a second, Peter Siebold, 43. Alsbury died at the scene, according to the Kern County Coroner’s Office. Siebold was headed to surgery Saturday, according to The Associated Press.

Branson told reporters that the Virgin Galactic program would "not push on blindly." "We owe it to our test pilots to figure out what went wrong. If we can overcome it, we’ll make absolutely certain that the dream lives on," the British businessman added. Branson conceded that the program "fell short," but pointed out that the early days of aviation were risky before they became safe.

There is good news from this story: Pilot Injured in SpaceShipTwo Crash 'Alert, Talking'.

A pilot injured in Friday’s deadly Virgin Galactic test flight accident is awake and able to speak with family members and doctors, the company involved in the craft’s development and testing said.

Peter Siebold, 43, had surgery on his arm, his family told NBC News Saturday. He was injured when the SpaceShipTwo rocket plane broke up over California’s Mojave Desert Friday and crashed, killing pilot Michael Alsbury, 39. Scaled Composites said Siebold was the pilot and Alsbury was the co-pilot on the fatal flight.

I'm glad Siebold is recovering, but am sorry for the loss of Alsbury.**

These stories triggered some discussion both about privatizing space in general and about the specific disasters in particular.  Follow over the jump for the recycled comments from my diary on Daily Kos.

I'll start with the general thread.  Maggiejean began by asking "Privatizing space? I don't know."  That prompted Magnifico to answer with "political necessity."

I think privatizing space is necessary since there isn't an American plurality that supports funding the space program to the levels necessary for advancement. Some Republicans don't like the science, others don't like non-military government spending programs, etc. Some Democrats don't like spending on the space program when we have poverty and other social problems that the money could be applied too mitigating. So, if there is going to be significant advances in space, the US needs private enterprise to fund it and take the risk.

The next response was the image I used to begin this entry (thank you, Jeff Y), which Simplify took to its absurd, but logical and realistic conclusion.

Next time it'll be:

Gooserock started the next thread by pointing out that this has been happening for decades.

Private Rockets Have Always Been Exploding.

All our 50's and 60's defense missiles were privately built, many of them certainly. That's a big part of the reason for the huge launch crews for the manned space missions. John Glenn's orbital flight, first on an Atlas ICBM, didn't fly till something around the 11th attempt because of all kinds of countdown glitches, many with the vehicle. Atlases were blowing up all over the place back then.

Part of the function of the space race was to demonstrate to the Soviets as part of history's most out-in-the-public troubleshooting demonstration that our launch vehicles were becoming a credible threat. All the flights flew on weapons till the Apollo lunar series.

Enjoy a little Project Gemini suit-crapping from our shortest ever manned space flight; the information we had at the time was that this flight went about 6" but I think now the information is that it didn't move.

This was Gemini 6; the reference to 7 is the Gemini 7 mission already in orbit, and they were within sight during 6's launch attempt and saw it ignite and shut back down.


This is the Titan missile and their reputation even decades after the end of Project Gemini was still "Titan goes boom."

This led to a discussion of the reliability of rockets as weapons.

"[G]iven the nature of these hot rodded ICBMs, one wonders if push came to shove in 1962 most of these things would have exploded in their silos."

[T]he US was targeting each Soviet city with 3 or 4 nukes (and important cities like Moscow and Leningrad got 8 or 9), precisely because they expected some fairly high percentage of them would fail.

That's a chilling thought.  No wonder we had enough nukes to blow up the world several times over.

Finally, Simplify had something to say about the specific disaster.

Antares video doesn't answer its own question. My guess at this point, from what's been reported and what's in the videos, is that the first explosion at the tail of the rocket was the intentional range safety destruct happening, and that the rocket had already started to go off course before that.

The Russian outfit that already claimed they somehow know it wasn't the fault of the engine is playing a cute PR game but isn't doing its own credibility any favors. Such a grossly irresponsible move.

Well, I'm not surprised.  Russia is showing signs of being an unreliable partner in space.

*Midnight Greenwich Time is now 7 PM, not 8 PM, so that's when the stats for the next day begin.

**Robert Reich had the following to say on Facebook about the disaster.

I heard a commentator this morning, talking about the Virgin Galactic crash, say “the tragedy is it will delay space tourism.” Baloney. The tragedy is one pilot on this test run was killed and another seriously injured. It’s too bad Justin Bieber, Ashton Kutcher, and 600 other wealthy people and celebrities who already have plunked down $250,000 apiece will now have to wait longer for their thrill. But at a time when America’s roads and bridges and public transportation systems are falling apart because we don’t have the money or political will to do anything about them I can’t get terribly upset about a delay in space tourism. You agree?