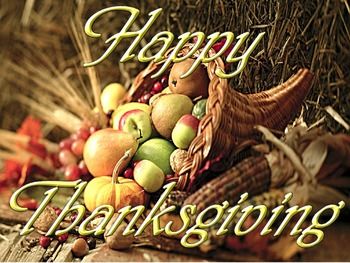 It's Thanksgiving, which means, like last year and the year before it's time for me to reprint all the food, farming, and nutrition news from Ovenight News Digest:Science Saturday since Food Day 2014.  Appropriately enough for the theme of this blog, I begin with some post-apocalyptic food news from Michigan Tech.

Bacterial Slime: It's what's for Dinner (After a Catastrophic Crop Failure)
by Danny Messinger
November 19, 2014


If it were the end of the world as we know it, we’d be fine, according to Michigan Technological University professor Joshua Pearce.

“People have been doing catastrophic risk research for a while,” says Pearce. “But most of what’s been done is dark, apocalyptic and dismal. It hasn’t provided any real solutions.”

Even when looking at doomsday scenarios—like super-volcanoes, abrupt climate change and nuclear winter—society’s forecast isn’t horrific. In fact, Pearce says life will still have a sunny outlook. His research is outlined in a new book, Feeding Everyone No Matter What, out this week.

The good news is that we can feed everyone, as long as people plan ahead and are willing to eat bacteria, fungi, and insects for up to five years until what passes for normal agriculture returns.  The latter part I'm not as worried about as the first part.  I'm not as optimistic about people preparing.

Follow over the jump for the rest of the food news, presented in more-or-less reverse chronological order.


ANN ARBOR—Implementing the latest government standards for food and beverages sold at U.S. schools would substantially improve school nutrition, according to a new University of Michigan study.

The research, published online by JAMA Pediatrics, found that from fall 2007 to spring 2012, only 2 percent of middle school students and less than 1 percent of high school students attended schools where all five components of the new U.S. Department of Agriculture nutrition standards were in place for school meals, vending machines and snack bars.

"These results indicate that the USDA standards—if implemented fully and monitored for compliance—have the potential to change the current U.S. school nutritional environment significantly," said Yvonne Terry-McElrath, a researcher at the U-M Institute for Social Research and first author of the study.


University of Michigan: What agricultural 'ecosystems on steroids' are doing to the air
November 19, 2014


ANN ARBOR—In a study that identifies a new, "direct fingerprint" of human activity on Earth, scientists have found that agricultural crops play a big role in seasonal swings of carbon dioxide in the atmosphere.

The new findings from Boston University, the University of Michigan and other institutions reveal a nuance in the carbon cycle that could help scientists understand and predict how Earth's vegetation will react as the globe warms.

Agriculture amplifies carbon dioxide fluctuations that happen every year. Plants suck up CO2 in the spring and summer as they blossom. Then they release it in the fall and winter as they decompose.

The study authors point out that these seasonal effects are distinct from the overall upward trend in CO2 levels that's the main culprit of climate change. While farming does contribute to that upward trend, the seasonal swings themselves don't.


The University of Vermont has received a $500,000 three-year grant from the Food and Drug Administration to determine how long E. coli will survive in raw manure applied to soil as crop fertilizer.

The results of the research trials, which began last week, will help inform an important revision of a proposed produce safety rule in the Food Safety Modernization Act, the most sweeping reform of food safety regulation in over 70 years.

The 2011 law was prompted by a spate of deadly incidents involving hamburger and spinach contaminated with a rare pathogenic form of the E. coli bacterium, O157:H7. Initially it called for a nine-month waiting period before crops fertilized with raw manure, which can contain E. coli, although very rarely the dangerous type, could be sold.

University of Vermont: The Midge that Eats More Kale
by Joshua Brown
November 11, 2014


Three years ago, Tony Lehouillier began to worry about some of his purple kale. “It was just weird looking,” he says, cupping his hands around a tall stalk on his farm near Johnson, Vt. “Then the top would start to die. Plants would fold over.” Others had strangely puckered leaves and brown scarring. The blighted kale didn’t necessarily die, but it wasn’t marketable either. For Lehouillier, one of Vermont’s largest organic growers of kale and other cabbage-family crops -- like broccoli -- the mysterious damage looked like disaster.

It turned out the culprit was a tiny pest called swede midge. Soon, Lehouillier was in touch with Yolanda Chen, an assistant professor in UVM's Department of Plant and Soil Science -- the only researcher in the United States actively studying the midge.

The swede midge is a threat not only to the viability of Lehouillier's farm but to local organic production of these key crops throughout the state -- unless Chen and her students find a way to fight the fly.

University of California: Historian serves up the story of Chinese food in America
By Laura Rico, UC Irvine
Tuesday, November 4, 2014


Before fast food and home delivery, there was chop suey and red leather booths. American Chinese food was a precursor to ubiquitous chain restaurants, democratizing the once-exclusive dining-out experience for working-class whites, African Americans and Jews.

The influence of Chinese cuisine throughout the 20th century and beyond is told in "Chop Suey, USA: The Story of Chinese Food in America," by UC Irvine history professor Yong Chen. The new book opens with a question: Why is Chinese food so popular in the United States?

“Americans fell in love with Chinese food not because of its gastronomic excellence, but because of its affordability and convenience,” Chen said. “They preferred the quick and simple dishes of China while shunning its haute cuisine.”

"Chop Suey, USA," published by Columbia University Press, sheds light on the critical yet overlooked role that Chinese fare has played in developing the American way of life and expanding access to it.


UNIVERSITY PARK, Pa. -- Feeding honey bees a natural diet of pollen makes them significantly more resistant to pesticides than feeding them an artificial diet, according to a team of researchers, who also found that pesticide exposure causes changes in expression of genes that are sensitive to diet and nutrition.

"Honey bees are exposed to hundreds of pesticides, while they are foraging on flowers and also when beekeepers apply chemicals to control bee pests," said Christina Grozinger, professor of entomology and director of the Center for Pollinator Research, Penn State. "Our study demonstrates that exposure to non-lethal doses of at least two of these pesticides causes large changes in the expression of genes involved in detoxification, immunity and nutrition-sensing. This is consistent with results from previous studies that have found that pesticide exposure compromises bees' immune systems. Furthermore, our study reveals a strong link, at the molecular level, between nutrition, diet and pesticide exposure."

Exploring this link further, the researchers found that diet significantly impacts how long bees can survive when given lethal doses of a pesticide.


When it comes to combating obesity, it often seems as if there are as many ideas as junk foods. David Frisvold, assistant professor of economics, has studied a number of public policy initiatives aimed at reducing obesity and has found mixed results.
...
Frisvold’s research has focused on the economic effectiveness of public policies aimed at reducing those rates and has found that addressing the problem in childhood is an important tactic in reducing overall obesity rates.

In addition, comprehensive policies and programs that support and encourage increased physical activity and the consumption of nutritious foods are more effective than policies that impose taxes or other financial penalties on consumption of high-sugar or high-fat foods.


AMHERST, Mass. – Binge drinking can have lasting effects on brain pathways that are still developing during adolescence, say neuroscience researcher Heather N. Richardson and her colleagues at the University of Massachusetts Amherst and Louisiana State University. Results of their study using a rodent model of adolescent drinking appear in the October 29 issue of The Journal of Neuroscience.

Richardson says, “Adverse effects of this physical damage can persist long after adolescent drinking ends. We found that the effects of alcohol are enduring.” She adds, “The brains of adolescent rats appear to be sensitive to episodic alcohol exposure. These early experiences with alcohol can physically alter brain structure, which may ultimately lead to impairments in brain function in adulthood.”

She and her colleagues believe their study is the first to show that voluntary alcohol drinking has these effects on the physical development of neural pathways in the prefrontal cortex, one of the last brain regions to mature.

The Guardian: What language tells us about the roots of the stone age diet
As a restaurant offering ‘paleo’ food opens in London, can linguistics shed any light on what our ancestors ate?
David Shariatmadari
theguardian.com, Wednesday 22 October 2014 06.30 EDT


Next month, the UK’s first paleolithic restaurant will open in London. The paleo, stone-age or caveman diet has been around in various forms for decades. But it harks back to a much earlier time, when our eating habits were supposedly in line with our evolution, before agriculture came along and made us civilised but unhealthy.

One of the best TEDx talks I’ve watched is an efficient debunking of the stone-age diet by Christina Warriner. In short: the meat-heavy regimen is not at all how cavemen ate, and many so-called stone-age foods – like root vegetables – are in fact the product of intensive cultivation (wild carrots, for example, are generally tiny and full of toxins).


By analysing DNA extracted from the petrous bones of skulls of ancient Europeans, scientists have identified that these peoples remained intolerant to lactose (natural sugar in the milk of mammals) for 5,000 years after they adopted agricultural practices and 4,000 years after the onset of cheese-making among Central European Neolithic farmers.

The findings published online in the scientific journal Nature Communications (21 Oct) also suggest that major technological transitions in Central Europe between the Neolithic, Bronze Age and Iron Age were also associated with major changes in the genetics of these populations.

For the study, the international team of scientists examined nuclear ancient DNA extracted from thirteen individuals from burials from archaeological sites located in the Great Hungarian Plain, an area known to have been at the crossroads of major cultural transformations that shaped European prehistory. The skeletons sampled date from 5,700 BC (Early Neolithic) to 800 BC (Iron Age).

Members of the Sustainable Agriculture Student Association have spent the past two summers growing and cooking food for people in need. This year alone, they've grown several hundred pounds of food to give away to the Food at First food pantry and free meal program. They even dedicate one day a month to cook dinners, often using food they've grown right from their own garden. It all meets their mission of feeding people nutritious food in a sustainable way.

That's quite the spread of food news.  I hope you enjoyed the feast.

Also, stay tuned for more pie drinks for Thanksgiving.  Tipsy Bartender has at least three recipes to share this year.