Rosetta: Philae to land on comet and other November space events 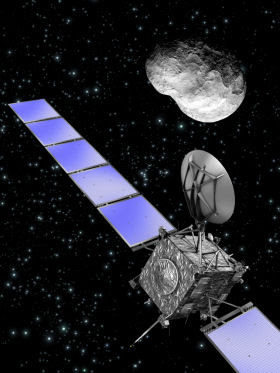 I last wrote about Rosetta in August.  Now it's time to update the progress of the mission, as the Rosetta's probe Philae is scheduled to land on the comet today.

Science at NASA leads off with ScienceCasts: How to Land on a Comet.

The European Space Agency's Rosetta spacecraft is about to attempt something "ridiculously difficult" - landing a probe on the surface of a speeding comet.

Follow over the jump for more from JPL and Hubble Space Telescope.

Now, three videos from JPL about the encounter, beginning with Landing on a Comet - ESA's Rosetta Mission.

On November 12, the European Space Agency will attempt something that's never been done — make a soft landing on a comet. Find out how NASA is assisting.

Next, The Rosetta Mission Asks – How Do You Land On A Comet?

Right now the Rosetta spacecraft is in the orbit of the comet getting its lander ready for this historic event. Watch and learn how easy or how hard it is to land on a comet because nobody has done it before.

I think that's enough of different ways to say the same thing.  Time to move on to putting the landing in the context of other space events this month with What’s Up for November 2014.

Twin meteor showers feature the slow Taurids and the swift Leonids while Rosetta's lander Philae is scheduled to land on Comet C-G and transmit data from the surface about the comet's composition.

I can't post one without the other, so here's Hubble Space Telescope's Tonight's Sky: November 2104.

Here's to Philae successfully landing on a comet.