Predictions vs. reality for Katy Perry at the Super Bowl 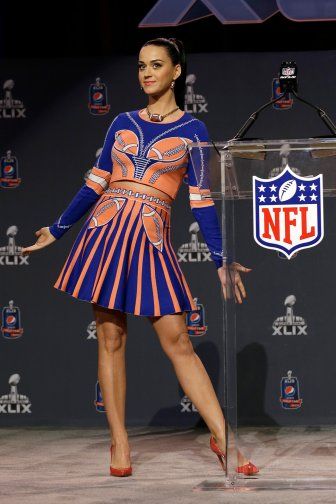 I concluded NABLOPOMO for February: MAKE by telling my readers to "stay tuned for the Sunday entertainment entry, which will most likely be about the Super Bowl."  I was planning on posting it earlier, but my wife and I were having too good a time watching "Gone Girl," which has an Oscar nomination for Best Actress in a leading role, for me to post before the game.*  I then was having too good a time watching the game itself to post during it.  Good thing, as I would have made a fool of myself trying to guess Katy Perry's set list, which I decided would be my topic for tonight.  That written, it didn't stop a bunch of people from trying.  First, WXYZ actually included her songs among the Super bowl prop bets on the 7 Sports Cave.


The guy who said she'd open with "Roar" and end with "Firework" was right on.  "Dark Horse" also made the set list as the second song.  That placed them even or ahead of the people at Bleacher Report, who called those three songs but got the rest wrong.  Fansided didn't do much better, listing seven songs but only getting one more, "Teenage Dream," for their troubles.  I think the problem was that no one was thinking about what the other artists would perform, concentrating only on Perry.  The result was this set list from Sports Illustrated.

No wonder the prognositicators were off.

For what it's worth, I enjoyed the halftime show, even if it was empty commercial spectacle.  Hey, I can't be all DOOM all the time.

*That movie fits the theme of crime among the nominees.  I'll have more on that and the other nominees on a Sunday later this month.
Posted by Pinku-Sensei at 11:09 PM