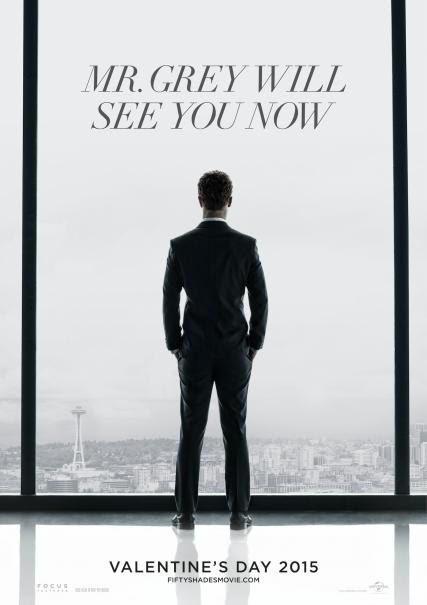 I concluded yesterday's science of Valentines Day entry by promising that today's "Sunday entertainment entry will also celebrate today, as I plan on covering 'Fifty Shades of Grey.'"  I have both commerce and controversy to report, commerce above the jump and controversy below.

WXYZ set the stage on Friday with "Fifty Shades of Grey" in theaters.

The controversial movie based on the book "Fifty Shades of Grey" is in theaters, and metro Detroiters are packing them to see it.

The theaters were expecting a lot of business, and they got it.  The movie broke records on Friday, as USA Today reported 'Fifty Shades of Grey' whips up $30 million.

Fifty Shades of Grey opened Friday with a bang — an impressive $30.2 million haul, according to studio estimates.

The book adaptation of E.L. James' best-selling novel took in $8.6 million from late screenings Thursday, the first official glimpse that paying fans have had for the long-awaited film.
...
Fifty Shades of Grey is already in the record books. According to Rentrak, the film has already posted the biggest opening day for any film released in February (beating The Passion of the Christ and its first day gross of $26.6 million in 2004).

Estimates for the opening weekend domestic box office ranged from $69 million to $100 million, but were mostly in the $75-80 million range.  So far, it looks like the movie will meet all but the most optimistic of them, as Variety posted Box Office: ‘Fifty Shades of Grey’ Explodes With Record-Breaking $81.7 Million this morning.

“Fifty Shades of Grey” sizzled at the box office, setting new records for the highest grossing Presidents Day Weekend opener of all time and ranking among the biggest R-rated debuts in history.

“Fifty Shades of Grey” will do more than $90 million over the four-day holiday, in addition to triggering a massive increase in heart palpitations across the moviegoing public. Among the many high-water marks the saucy tale has hit, the film’s debut is the second-biggest in February history behind “The Passion of the Christ” and the fourth-biggest R-rated premiere, trailing “The Matrix Reloaded,” “The Hangover: Part II” and Mel Gibson’s aforementioned crucifixion tale.

At least “The Matrix Reloaded” is safe this weekend, although its gross might get beaten eventually.*

Speaking of "safe" and "beaten," follow over the jump for the controversy.

WXYZ also broadcast segments about activists calling attention to the possible harmful effects of the movie, beginning a week ago with People asked to boycott 'Fifty Shades of Grey,'

Dozens of domestic violence organizations are using Twitter to encourage movie-goers to boycott 50 Shades of Grey, saying the film normalizes violence against women.

It is not just a love story with lots of twists and turns but the new movie based on the hit books, Fifty Shades of Grey, is about a young literature student who falls in love with a controlling, wealthy businessman.

The movie, which is supposed to have controversial bondage sex scenes, has one local domestic violence organization advising people to think twice before going to see it.

“It romanticizes controlling behavior sending that message that somehow romance, violence, being controlled, being overwhelmed is something that is glamorous or exciting,” said Emily Matuszak, senior director of programs at Haven.

Research from MSU suggests that Matuszak is right to be concerned, as the institution advertised that an MSU domestic abuse expert can discuss ‘Fifty Shades’.

“Fifty Shades of Grey,” which opens Feb. 13, is expected to become a blockbuster, yet the movie’s themes of bondage, domination and sadomasochism perpetuate the problem of violence against women, critics argue.

Michigan State University’s Amy Bonomi, a nationally recognized expert on domestic abuse, has studied the best-selling books the movie is based on and found that emotional and sexual abuse is pervasive in the work.

In another study, Bonomi found that young women who read “Fifty Shades” are more likely than nonreaders to exhibit signs of eating disorders, have a verbally abusive partner, engage in binge drinking and have multiple sex partners.

If there's research on entertainment, I'll quote it.  It's what I do.

As for the effect of culture on its participants, if reading the book is correlated with those behaviors, I wonder what associations will be uncovered from watching the movie.  I'm sure professor Bonami will find out.

Fifty Shades of Grey opened huge internationally as well, pulling an early total of $66 million from 56 territories, according to studio estimates. The international weekend estimate is $158.3 million which would set a record for the biggest opening weekend for an R-rated film internationally — the current record holder is The Matrix Revolutions with $117 million in 2003.

Well, phooey.  As flawed as it was, "The Matrix Reloaded" is probably my favorite Matrix movie.  I went to see it twice and always enjoy seeing The Merovingian and Persephone interacting with Neo and his friends.  I'm sorry to find out it's lost its place in the record books.

On another note, Variety also reported on the box office of documentaries this weekend.

The indie label’s “Citizenfour,” the Oscar-nominated documentary about Edward Snowden, made $31,138 this weekend from 17 theaters, pushing its total to $2.6 million.

I concluded 2014 in movies for nerds and geeks with this note about the documentaries mentioned by Wired.

Here's to at least some of these movies being nominated for Best Feature Length Documentary at the Academy Awards.  If any of them are, I'll be sure to write about it.

“Citizenfour” was among that list, which reminds me that the Oscars are next Sunday.  I know what I'll be writing about in a week!