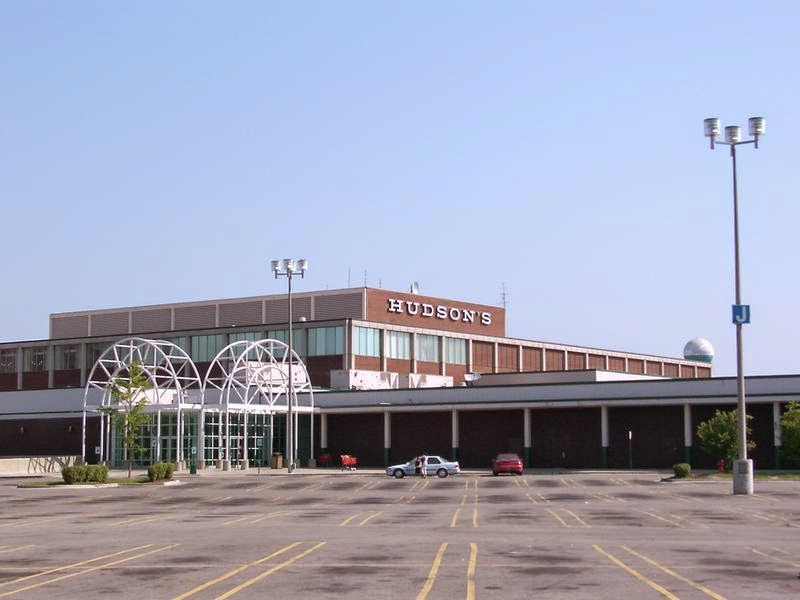 The signs of collapse and possibly renewal all literally all around me.  Last December, I described how my employer imploded the vacant office tower across the street in Watch this building go boom.  Yesterday, a different kind of collapse happened on the other side of campus, as WXYZ reported Northland Mall in Southfield to close.


This has been a long time coming, but that makes it no less sad.  In the 1990s, Northland Mall was a thriving shopping center.  The department chair took me out to lunch at what was then the Hudson's, now Macy's, in the center of the mall the day she hired me.  During the early 2000s, I mall walked there for exercise and got to see the decline first-hand.  First, the Montgomery Wards closed in 2001 as the company went bankrupt. The location was never filled.  A few years later, J. C. Penny closed its store there.  It was also never replaced.  That meant that two of the center's five anchor spots were vacant for at least a decade.  By this time, the once thriving mall had half of its smaller storefronts vacant as well.   At that point, it was too depressing a location to walk for exercise.  I switched over to Laurel Park Place in Livonia to mall walk.  That was ten years ago.

I've only been back to Northland Mall once this decade, to shop at the Macy's.  That was a few years ago, and the mall was even more vacant, with only the Macy's and the Target remaining as anchors and even fewer small shops than in 2005.  It was depressing.  Macy's apparently thought it was, too, as the chain announced last month that it was closing its Southfield location.  USA Today reported the news with the headline Macy's closing may kill one of first suburban malls.  That's exactly what ended up happening.

Northland Mall closing is also part of a bigger picture.  CNN Money's story One of America's oldest malls is closing not only reports on the news and includes photos of the interior of the mall, but also has a video about abandoned malls and links to other stories about the closing of malls all over the country.  Business Insider paints an even grimmer portrait, declaring America's Shopping Malls Are Dying A Slow, Ugly Death.  That was a year ago.  Based on what happened to Northland Mall, it looks like they're right.
Posted by Pinku-Sensei at 10:38 AM