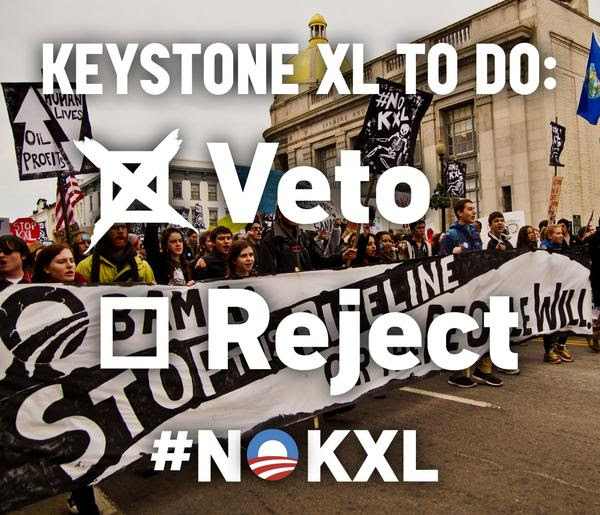 I've been pessimistic about prospects for halting the Keystone XL pipeline for four years.  In 2011, I twice wrote that I thought opposing the project was going to be a waste of time.


I've decided that protesting the concept of the Keystone XL pipeline is futile to the point of being less than useless, as the Canadians would just sell the oil to the Chinese, something the video points out. Therefore, opposing the pipeline as a way of slowing down the exploitation of one of the most carbon dioxide emitting ways of getting oil out of the ground is a waste of time. It's going to be extracted one way or another and opposing the pipeline means that China will benefit from it instead of the U.S. Meanwhile, the global commons will still suffer.

I repeated my opinion last year, calling the pipeline "a dumb idea that's going to hurt Americans, and it's still likely to happen."*  Yesterday, I became more optimistic, as Reuters reported Obama vetoes Keystone XL pipeline, leaving it in limbo.

The U.S. Senate Majority Leader Mitch McConnell, after receiving Obama's veto message, immediately countered by announcing the Republican-led chamber would attempt to override it by March 3.

That is unlikely. Despite their majority, Republicans are four votes short of being able to overturn Obama's veto.

I am pleased to write that this is the most read story on Reuters while I type.  Pro or con, people care about this issue.  It's almost enough to get me to post Professor Farnsworth.

*I got pushback to my pessimism from Goldmund in the comments.


I don't believe that protesting the Keystone XL pipeline is "useless". Of course Canada intends to sell the oil to China, not matter how they end up shipping it. The American people will get little or none of it. But TransCanada has decided that shipping it by pipeline, exploiting all the loopholes in the US political system (e.g. using eminent domain to seize private landholdings, manipulating people with the promise of jobs, etc.) to ports in Houston is by far the most profitable way to go. This is why they're putting so much pressure on US politicians to approve it. Stopping Keystone XL- even delaying it- will drive up the cost and may end their operation altogether, so to me opposing it is worth the effort.

My response showed that I was becoming more optimistic even then.


Delaying the pipeline seems to be working. When I first wrote about it in 2011, I expected it to be approved after the election in 2012. Now, it looks like it will be delayed until after the mid-term elections this year. At this rate, Obama will wait until he's a complete lame duck and approve it in 2016 after the next President is elected. That's better than I expected.

That's still what I think, although more die-hard opponents to the project are even more optimistic, as the Reuters article mentioned.

"This veto, along with the president’s increasing public skepticism about Keystone XL ... makes us more confident than ever that (the) president will reject the permit itself once and for all," said Gene Karpinski, president of the League of Conservation Voters, another pipeline opponent.

I'm not that hopeful.  Just the same, watch Keystone PipeLIES Exposed, the opener of which I've embedded and linked to the rest of the film here.  More informed opposition will only help the cause.
Posted by Pinku-Sensei at 10:37 AM