'Westworld's Thandie Newton talks about the U.S. election, Brexit, and her role 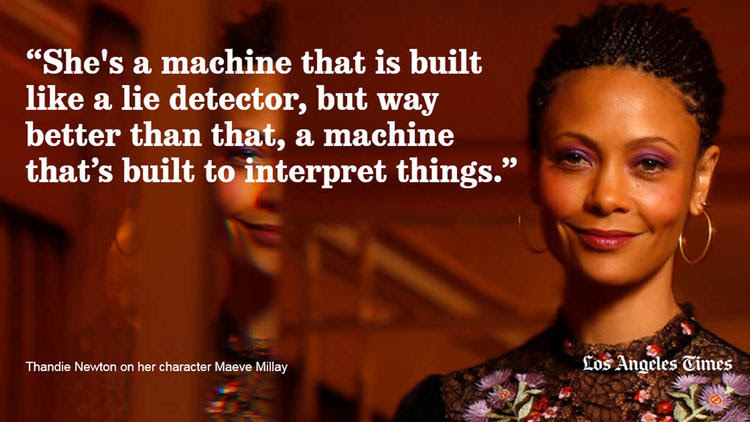 "I have more to write about "Westworld," but I'll save it for another installment.  Stay tuned."  That's how I finished Thanks to Infidel 753, I describe how 'Westworld' is like 'Jurassic Park' and it's how I begin today's entry.

As I've written before, I'm an environmentalist, so I not only recycle, I conserve my resources.  One of those resources is the video below, When Westworld Sounds Better than the Real World from The Late Show with Stephen Colbert, which was broadcast in conjunction with a Maeve-centric episode.  Since Sunday's episode also featured Maeve, I thought it was time to share it.

Westworld star Thandie Newton suggest that the US and UK are now closer than ever, and wishes it would cost less money to visit Westworld.

That was a hopeful message on her part about the election and a wise response from Colbert, although I'm not as optimistic that will happen.

Speaking of hopeful messages, Newton connected her role to her real life in the Los Angeles Times article Infidel 753 linked to.


Thandie Newton, who fights for women’s rights in her private life, is hopeful about the potential conversations around the show and her character Maeve. “This is one of those big, bombastic statements, that I don’t want to turn people off, but I really think it’s part of the solution when it comes to violence against women, when it comes to gender equality,” she says. “This was the first time in my life I was able to do the work that I do as an activist through the role.”

I can imagine that's a satisfying feeling.

"Westworld" will return for a second season, something I'll write about later.  I'd like to see Newton's character Maeve return, but after last night's episode and the previews, I'm not holding my breath.  In the meantime, enjoy this show about an MMO made real, another angle I'll explore later.  Stay tuned.
Posted by Pinku-Sensei at 6:49 AM