Vote for Troy Athens in the WDIV Battle of the Bands 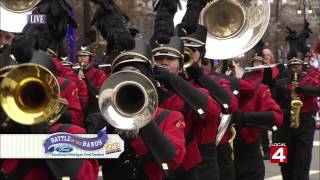 Happy Thanksgiving!  As I type this, both the Macy's Parade in New York and the parade formery known as Hudson's in Detroit are both going on.  I wrote about the Macy's Parade twice and Detroit's parade once last year.  This year, I looked at the marching bands participating in both parades and found only one that inspired me, Troy Athens in Detroit's Parade.*

Athens is one of 10 high school bands participating in the parade on Woodward Avenue, which is televised nationally.
...
The parade celebrates its 90th anniversary this year. To mark the occasion, Cable chose “Celebrate” by Kool & the Gang as one song that the 100-member band will perform as it marches the 2 1/2 miles of the parade route.

Why do I care about Troy Athens?  It's because I used to be a judge for the MCBA and Troy Athens is the only band in today's parade that competed in the circuit's shows this year, placing tenth out of twelve in the top class at this year's championship.  I may not have judged for MCBA for a decade, but I have some loyalty to the organization and its competing units.  Consequently, I'm asking my readers to vote for Troy Athens in WDIV's "The Battle of the Bands."  Click on the link to cast your ballot.

The Oakland Press reported "Athens has been named best band in past parades at least a dozen times," so I feel more optimistic than I did when I asked people to vote for Walled Lake Central in MLive's poll last year.   They ended up losing, but had a good time at the Macy's Parade last year anyway.

Finally, here is the band's performance at last year's MCBA championship, playing a space show.  I can never resist that.

*I'll be more excited about the bands in the Macy's Parade next year, when Rockford H.S. marches.  That band earned won the highest class in the MCBA championship, beating Plymouth-Canton, who marched in the Rose Parade this year.  Here's to hoping I remember to write about them next Thanksgiving!
Posted by Pinku-Sensei at 11:24 AM