Trump pulls a Gingrich on space

Four years ago, I wrote Gingrich shoots for the Moon while campaigning in Florida.  In it, Newt Gingrich proposed establishing a lunar base by 2020.  I portrayed it as playing to the voters on Florida's Space Coast and a grandiose aspirational plan for the country.  It elicited the most approval I've ever expressed about Gingrich on this blog.

Seriously, Gingrich's grandiose plans for space exploration are the only thing I like about him. They prove that, unlike much, even most of the rest of his party, he hasn't given up on science. I applaud him for that.

Even so, it wasn't enough to make me like him otherwise.

However, his ideas about space are not enough to get me to vote for him. It would be like voting for Ron Paul because of his anti-war and pro-legalization positions, while the rest of what he advocates is just unacceptable.

It also subjected Gingrich to a lot of ridicule, deserved or not. 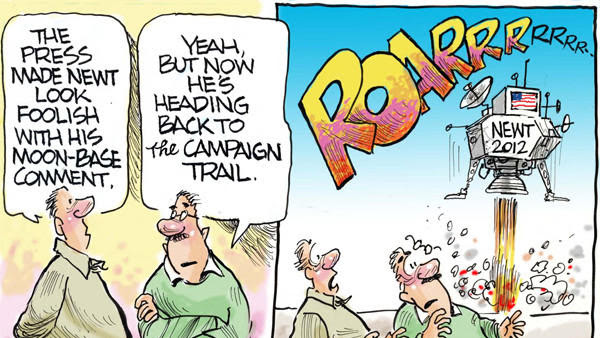 Gingrich's proposal didn't help him win Florida; he lost to Romney.  Still, it was one of the few things I sincerely and unironically liked about any of the 2012 Republican candidates.

It turns out that Trump has just done Gingrich one better; follow over the jump to read how.

Gingrich didn't run this cycle, but he was one of the first Establishment Republican politicians to get on board with Trump, to the point where I was rooting for him to be his running mate.  He didn't get the job, but he's still an important surrogate for Trump.  That written, I would expect Gingrich to have some influence on Trump.  Apparently, he did, as New York Magazine reported Trump Courts Swing Voters With Last-Minute Space Plan.

In a late bid for the single-issue astrophile vote, Donald Trump has unveiled a surprisingly detailed and ambitious agenda for American policy in outer space.

Trump’s plan, crafted by former GOP congressman and Science, Space, and Technology Committee chair Robert Walker, calls for NASA to shift its focus away from “politically correct environmental monitoring” and toward “human exploration of our entire solar system by the end of this century.”

“I will free NASA from the restriction of serving primarily as a logistics agency for low Earth orbit activity,” Trump declared, while campaigning in Florida last week. “Big deal. Instead, we will refocus its mission on space exploration. Under a Trump administration, Florida and America will lead the way into the stars.”

This did not come as a complete surprise to me.  Space was one of three science and technology strengths when FiveThirtyEight reviewed The Science Of Trump: Energy, Space And Military Tech.

Maggie: I want to start this off by asking you all what you think connects your fields. Why might one presidential candidate prioritize military technology, energy production/independence, and space? Is there an obvious thread pulling them all together?

Jill: To my mind, yes. Aside from the obvious scientific and technology overlaps (for example, space technology can be used as a military force-multiplier), science is a political issue for the candidates. Scientific prowess, as well as how technology plays into American issues of security, has political significance that will resonate with voters.

Deborah: I agree with Jill. They also influence what people care about — jobs and the economy, security and the environment.

Jill: There’s also an issue of pride here with all of them too, which I think Trump in particular is tapping into with regards to the narrative of “making America great again.”

Cynthia Cook: All three areas are ones where innovation plays an important and obvious role — where new technologies have allowed for exciting new capabilities and efficiencies. These are also areas where public policy has an important role to play in shaping the direction of the relevant industries.

Maggie: I think that point of pride is an interesting one, for sure.

So space policy is the one area where Trump might actually be good for the country.  That written, he's even more grandiose than Gingrich, so of course his plan is even more ambitious, as New York Magazine citing Mother Jones writes.

Obama, following other presidential moonshots, has set goals of visiting an asteroid by 2025 and reaching Mars sometime in the 2030s. Walker and Trump propose just one deadline: exploring the farthest reaches of the solar system by the end of the 21st century. Mars is too limited a target, Walker says, since existing chemical-fueled rockets (similar to those used for the Apollo and Space Shuttle programs) could get the job done with some investment. “If you’re looking at technology that looks for the solar system, you are then likely to move toward plasma rockets, toward nuclear-powered rockets, certainly toward solar sails,” he explains. “There are a variety of things that you can do, which allows you to apply power throughout the mission.”

The third worst part of this is that Trump's plan is actually not a bad idea.  The second worst is that it foresees the space policy council headed by Mike Pence, a man who denies evolution.  Ugh.  I'd rather Gingrich be a "space czar."  Maybe Trump would appoint him as head of NASA.  I could live with that.

Anyhow, Trump’s new plan is sure to win him support from voters who believe we need more ambitious goals for space exploration, less ambitious ones for monitoring climate, and a man who believes in intelligent design overseeing that transition.

Sorry, I want more ambitious goals for both space exploration and climate monitoring along with people who understand science and technology in charge of both.  This combination isn't good enough for me.  It's like hoping for the alternative history in "The Man in the High Castle" to happen just so there could be commercial SSTs by the early 1960s.

The cost would be too high.