Speculative fiction in movies at the People's Choice Awards 2017 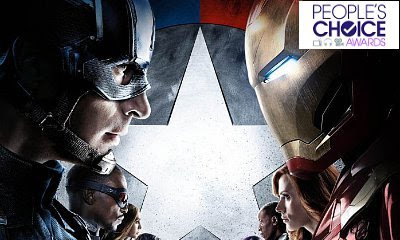 I promised "movies tomorrow" at the end of Speculative fiction on television at the People's Choice Awards 2017, part 2.  It's time to deliver.

Wochit Entertainment sums up what a great year it's been for speculative fiction of two kinds in Superheroes Dominate Peoples Choice Awards.

Yes, it's been a great year for superheroes and animated films, at least at the box office.  According to Box Office Mojo, the nine top grossing films of the year so far are either animated (1, 3, 4, and 6 are "Finding Dory," "The Secret Life of Pets," "The Jungle Book," and "Zootopia") or superhero flicks (2, 5, and 7-9 are "Captain America: Civil War," "Deadpool," "Batman v Superman: Dawn of Justice," "Suicide Squad," and "Doctor Strange").  One has to go all the way down to #10 to find a movie that is neither, "Jason Bourne," a spy thriller/action film.  It probably won't stay there, as I expect "Rogue One" will knock it out by the end of the year.  If so, that will mean that six out of the top ten will be Disney movies.  As I shared in By popular demand, 'Doctor Strange' tops the box office, it's already been a record year for Disney and it looks like the studio may set an all-time box office record.

Follow over the jump for all the movie nominees, along with my comments about them and their chances of winning.

I begin with the headliners.

My favorite was "Deadpool" but I expect the winner has been forecast by the box office--"Finding Dory."

My favorite of all time from this list is probably Tom Hanks, but for this year it's Ryan Reynolds.  I'm finally glad he got a good role in a good movie.

As for Kevin Hart, he's the answer to Wochit Entertainment's question Who Leads The 2017 People's Choice Award Nominations?

With a total of five nominations, Kevin Hart tops the list of 2017 People’s Choice Awards nominees. The categories in which Hart was nominated include “Favorite Movie Actor,” “Favorite Cable TV Actor” and “Favorite Comedic Collaboration.” He was also nominated for his roles in the films “Central Intelligence” and “The Secret Life of Pets,” and his TV show, “The Real Husbands of Hollywood.” Voting in all 64 categories begins November 15 and ends Dec. 15. Fans can vote on the People’s Choice Awards website or on facebook. Winners will be announced during the live awards ceremony Jan. 18, 2017 on CBS.

With all those nominations, I'd be surprised if he didn't win at least one.

My favorite of this group is Jennifer Lawrence.  My wife's is Melissa McCarthy.  I think my wife will like the winner more than I will.

Substitute "Doctor Strange" for "X-Men: Apocalypse" and this is the Saturn Awards field for this category.  Again, my favorite is "Deadpool."  Box office might suggest "Captain America: Civil War" would win, but I wouldn't bet against the wise-cracking mercenary.

I'd vote for Ryan Reynolds, but Will Smith has a long history as an action star.  As for the rest, it comes down to which one of the Avengers can get the majority of the franchise's fans.

Zoe Saldana--oh, good, someone from the latest "Star Trek" movie to break up the superhero/youth dystopia stars.  Still, I'm not voting for her.  Instead, it's still Jennifer Lawrence.

FAVORITE THRILLER MOVIE
The Conjuring 2
The Girl on the Train
Nerve
The Purge: Election Year
The Shallows

"The Conjuring 2" is the highest grossing horror film this year, so I'd put my money on it.

Replace "Alice Through the Looking Glass" with "Moana" and that's the Oscar field unless Studio Ghibli's latest kicks out either "The Jungle Book" or "The Secret Life of Pets."  As for the winner, I expect it will be "Finding Dory."

I'd vote for Ellen DeGeneres, but Kevin Hart might sneak in here.

The highest grossing is "Ghostbusters" with "Central Intelligence" close behind.  I'd vote for "Ghostbusters."  I'm sure I'll have more to say about the film, which, like the original, I see as "Call of Cthulhu" played for laughs.

My vote goes for Dwayne Johnson, but his co-star Kevin Hart could beat him.

My wife and I would both vote for Melissa McCarthy, but Rebel Wilson might sneak past.

"Sully" is the highest grossing of the bunch, so I think it would be the favorite.  However, I'd vote for "Miss Peregrine’s Home for Peculiar Children," which is the second highest grossing, since it's a fantasy starring one of my favorite actresses who doesn't get enough credit, Eva Green.  I'll have both the movie and her on my nominations ballot for the Saturn Awards for fantasy films.

I'd vote for Hanks.  My wife will vote for Clooney.  I suspect my wife is more likely to pick the winner.

The best actress is unquestionably Meryl Streep, but these awards are not about the best, but about the most popular.  That might sway the voters to Julia Roberts or Amy Adams.  Me, I'll stick to Streep.

Stay tuned for the last entry of the month.