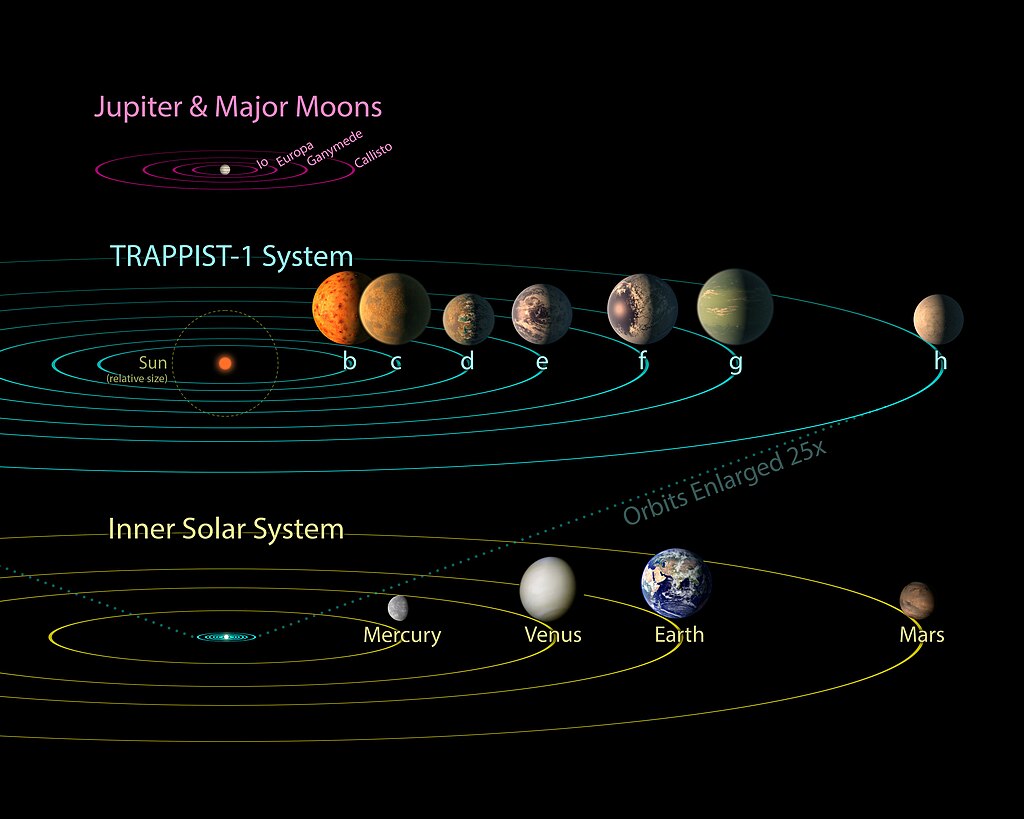 I promised to write about the speculative fiction winners at the Golden Reel Awards for today, but something more important came up.  NASA/JPL announced yesterday NASA & TRAPPIST-1: A Treasure Trove of Planets Found.

Seven Earth-sized planets have been observed by NASA's Spitzer Space Telescope around a tiny, nearby, ultra-cool dwarf star called TRAPPIST-1. Three of these planets are firmly in the habitable zone.

Over 21 days, NASA's Spitzer Space Telescope measured the drop in light as each planet passed in front of the star. Spitzer was able to identify a total of seven rocky worlds, including three in the habitable zone, where liquid water might be found.

The system has been revealed through observations from NASA's Spitzer Space Telescope and the ground-based TRAPPIST (TRAnsiting Planets and PlanetesImals Small Telescope) telescope, as well as other ground-based observatories. The system was named for the TRAPPIST telescope.

A new discovery by NASA’s Spitzer Space Telescope has revealed seven Earth-sized planets around the M dwarf star known as TRAPPIST-1. Three of them lie in what is known as the habitable zone -- where there is the potential for liquid water. It is the largest batch of Earth-sized worlds ever discovered in the habitable zone of a single star. While we don’t know if there is life on the TRAPPIST-1 planets, we do know that any life discovered there would likely be very different from life on Earth. It would have to survive the stormy solar flares of an M dwarf, adapt to a planet that might have extreme temperature swings, and thrive in red and infrared light. All seven worlds are early ambassadors of a new generation of planet-hunting targets that promise a new vision of the word “habitable.”

As much as I like comparing possibly habitable exoplanets to those in Niven's Known Space, such as Plateau or Wunderland, I won't be able to do that for this discovery.  The closest analogue is Gummidgy, which orbits CY Aquarii, a much larger star, which in the real world is much farther away, but in the Known Space universe is apparently much closer.  Either way, none of these worlds is Gummidgy.

That written, these planets are already in science fiction, as CNet reports.

While it's a little unusual for a top scientific journal to publish a work of science fiction, Nature is no stranger to the practice. The journal has regularly published a science fiction column since 2007, and the Trappist-1 planets really beg for the sci-fi treatment. The seven planets tightly circling a dim, ultracool dwarf star are much closer to each other than the planets in our solar system, and at least three of them might be just as habitable as Earth.

"The Trappist-1 system, with its short interplanetary distances, makes space opera possible," writes Suhner, who read the research paper before penning her story. "Traveling from Nuwa to Pangu takes a week. A lilliputian system where worlds are like neighboring countries."

Suhner said collaborating with scientists is essential to her work.

"Integrating advanced research into my texts allows me to talk about science while keeping the sense of wonder and awe intact," she wrote in a Nature blog post about the short story. "This is one of the main advantages of science fiction."

That didn't take long at all.

As for the Oscars and other award shows, stay tuned.  I'll get back to them tomorrow.  I do have my priorities.
Posted by Pinku-Sensei at 9:05 AM