Speculative fiction winners at the PGA Awards include 'The Shape of Water,' 'Coco,' 'The Handmaid's Tale,' and 'Black Mirror' 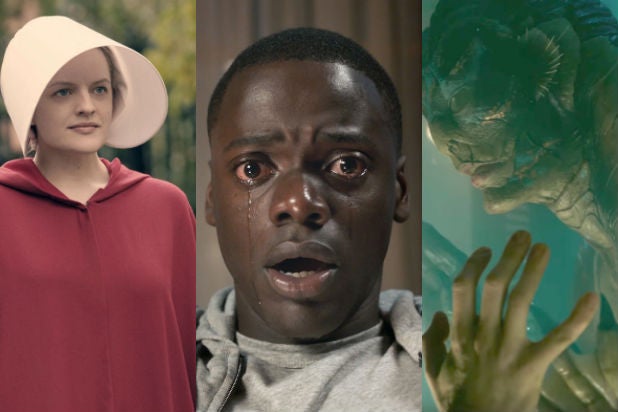 Guillermo del Toro's "The Shape of Water" has been named the best-produced film of 2017 by the Producers Guild of America, an honor that has typically been one of the most reliable indicators that a film is on track to win the Oscar for Best Picture. In the television categories, "The Handmaid's Tale" won for drama, "The Marvelous Mrs. Maisel" for comedy and "Black Mirror" for longform TV. Pixar's "Coco," to the surprise of no one, won the award for animated feature, while "Jane" won the documentary award.

That description managed to summarize nearly all the categories I covered in 'Wonder Woman' joins 'The Shape of Water' and 'Get Out' among PGA film and TV nominees and then some.

Follow over the jump to read how my wishes and predictions for these categories fared.

Here is the entire field from Deadline Hollywood.

Toss out one of the nominees and that could be the Oscar field for Best Picture.  As for which one that might be, I'd pick either "I, Tonya" or "Molly's Game" if "Wonder Woman" is to make the cut.

Nope, I didn't say who I thought would win or who I was rooting for.  Based on the next paragraph, one of the nominees I would have been hoping for was "Get Out."

By the way, "Get Out" is already a winner, as Deadline reported ‘Get Out’ To Receive Producers Guild’s Stanley Kramer Award.

The PGA will bestow its 2018 Stanley Kramer Award on Get Out, Jordan Peele’s social horror thriller that has been one of the most buzzed-about, and lucrative, movies of 2017. The honor will be given out during the 29th annual PGA Awards set for January 20 at the Beverly Hilton.

Congratulations!  I can't think of a better film for this honor.

The other would have been "The Shape of Water," so I got my wish.  As for my prediction, I'd have been worried about either "Three Billboards Outside Ebbing, Missouri" or "The Post."

Any show that has an award for animated features automatically recognizes speculative fiction.  Here are the nominees from the PGA.

The Award for Outstanding Producer of Animated Theatrical Motion Pictures:

The four highest grossing animated movies of last year, which I listed in Celebrate National Science Fiction Day with 'The Last Jedi' atop the 2017 box office, are all nominated, "Despicable Me 3," "Coco," "The LEGO Batman Movie," and "The Boss Baby."  Based on box office, "Ferdinand" might come as a bit of a surprise, as it just passed "The Lego Ninjago Movie" but is still behind "Cars 3," "The Emoji Movie," and "Captain Underpants: The First Epic Movie."  I wouldn't have expected any of them to be nominated.  In fact, I wouldn't be surprised if "The Emoji Movie" earns a Razzie or two.  Instead, I thought one of "Loving Vincent" or "The Breadwinner" might earn the fifth spot.  Nope, the story of the gentle bull gets it.

Again, I focused on the likelihood of this predicting the Oscar nominees instead of who would win this award, so I'll have to wait for two days to find out how that went.

On the other hand, I did make predictions for the rest of the categories.

Like the case with the movies, there is a strong consensus as to the top speculative fiction shows on television last year, "Game of Thrones," "The Handmaid's Tale," and "Stranger Things 2."  All three earned nominations for The Norman Felton Award for Outstanding Producer of Episodic Television, Drama, along with "Big Little Lies," which was moved here from movies and miniseries because HBO has ordered a second season, and "The Crown."  I'd say "Stranger Things" is favored, as it won this award last year but the reclassification of "Big Little Lies" as a drama series makes me less confident about that prediction.  It might just upset the rest of the field based on its dominance of awards for miniseries so far.

I got that one wrong, as I should have figured "The Handmaid's Tale" would repeat its Emmy win here.

Moving "Big Little Lies" out of the categories for long-form television (movies for TV and miniseries) made room for another series to earn a nomination in the category.  The likely beneficiary was "Black Mirror," which hadn't received a nomination in any of the year-end awards shows until now, even though it won two Emmy Awards.  Here is the list of nominees for The David L. Wolper Award for Outstanding Producer of Long-Form Television, which encompasses both movies of the week and  limited series.

The Wizard of Lies

With "Big Little Lies" out of the picture, this field is much more open.  I would expect one of "Fargo," "FEUD" Bette and Joan," or "Wizard of Lies" is the likely winner, although the two Emmy Awards for "Black Mirror" might mean something.

It turned out that it did, but I can't claim that I called its win.

Now for a category Wochit didn't mention, but Gold Derby did.

The final category with speculative fiction nominees is for Outstanding Children’s Program, which stands in for an animated television category.

Out of this group, I'd pick "Sesame Street."  I wasn't disappointed when I did so and it won an Emmy for children's programming.

That's a wrap for the PGA Awards for this year.  Stay tuned for a post about the winners of the SAG Awards tomorrow, followed by the nominees for the Razzies and Oscars after that.