I was very optimistic about the prospects of the speculative fiction nominees at the 2018 SAG Awards and got more so as awards season progressed.  Unfortunately, I was disappointed. I thought "Stranger Things" might repeat last years win for Ensemble in a Drama Series.  Nope.  Instead, speculative fiction only won two trophies for Outstanding Action Performance by a Stunt Ensemble for Motion Pictures and Television Series.  Still, that's worth celebrating.

Here is the announcement of the winners from the red carpet, beginning with Wonder Woman Wins Best Stunts: Red Carpet Interview from TNT.


The presenters certainly showed their enthusiasm for "Wonder Woman" winning this award.  I'm happy, too, although I can't claim calling it, as I merely wrote "Oh, look, two superhero films, a science fiction movie, and two action flicks, making this the strongest category for speculative fiction in movies."  No prediction here.


I did call this one.

Follow over the jump to see how the rest of my predictions fared.

"Get Out" has a nomination for Outstanding Performance by a Cast in a Motion Picture and Daniel Kaluuya garnered one for Outstanding Performance by a Male Actor in a Leading Role.  I still think neither will win, with Gary Oldman winning the acting award and “Three Billboards Outside Ebbing, Missouri” winning the cast award, but it deserved both nominations.  I'm hoping Kaluuya earns a nomination for Best Actor in a Film at the Saturn Awards.  I'm pretty sure "Get Out" will be nominated for Best Thriller Film (nothing supernatural about it, so it won't be nominated as horror).

I was right about both Gary Oldman and the cast of “Three Billboards Outside Ebbing, Missouri” winning, so chalk up two for me.

"The Shape of Water" earned nominations for Sally Hawkins as Outstanding Performance by a Female Actor in a Leading Role and Richard Jenkins as Outstanding Performance by a Male Actor in a Supporting Role.  I'm not optimistic about either winning, as the competition is very stiff in both categories.  That reminds me that I thought the actresses were better than the actors last year, both in film and on television.  This year, I think the men are as good as the women.

I was right that neither won.  Instead, CNN lists Frances McDormand and Sam Rockwell, both from “Three Billboards Outside Ebbing, Missouri.”  That's very consistent with the other awards shows.

While "Downsizing" may be a disappointment at the box office, Hong Chau's performance hasn't been, as she has now been nominated for Outstanding Performance by a Female Actor in a Supporting Role to join her Critics' Choice and Golden Globes nominations...Congratulations to Chau, as she is obviously the best thing about "Downsizing."  That won't be enough for her to win, as her competition is too stiff.  Holly Hunter, Allison Janney, and Laurie Metcalf are all established actresses and all delivered outstanding performances, so I think one of them will win.  Just the same, that she has been a consensus pick so far bodes well for her being nominated for an Oscar.

I was right that Chau wouldn't win and one of Holly Hunter, Allison Janney, and Laurie Metcalf; Janney won another statuette for supporting actress.

Now for the television nominees. 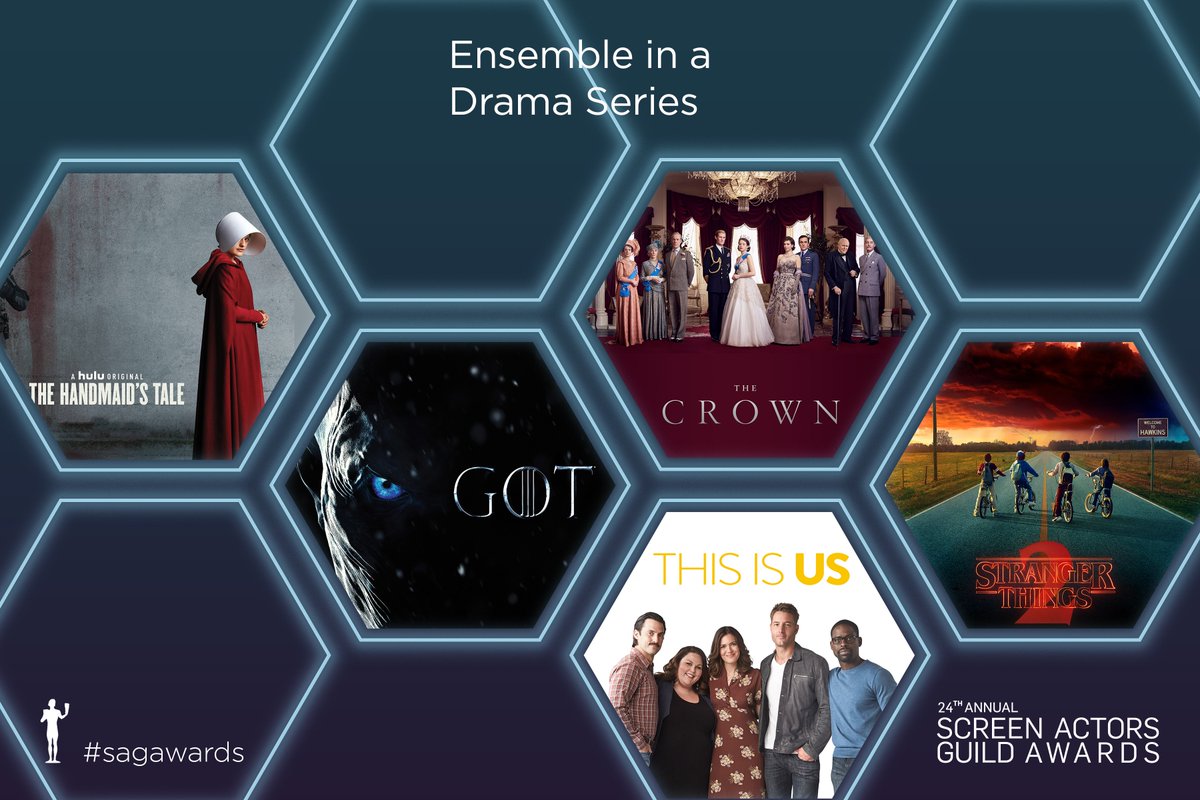 Speculative fiction did very well in drama, but didn't make a single appearance in comedy or television movies and miniseries.  "Stranger Things 2" earned the most nominations among drama series with four, tying "GLOW" in comedy series and "Big Little Lies" in television movies and miniseries.  As the image above shows, it joined "Game of Thrones" and "The Handmaid's Tale" among the nominees for Outstanding Performance by an Ensemble in a Drama Series.  Once again, speculative fiction nominees dominate drama.

Unfortunately, none of the speculative fiction nominees won.  Instead, "This is Us" did.

"Stranger Things 2" also earned two individual acting awards for David Barbour in Outstanding Performance by a Male Actor in a Drama Series and Millie Bobbie Brown in Outstanding Performance by a Female Actor in a Drama Series.  As for whether it will win any of them, I think it might repeat last year's win for Ensemble in a Drama Series, as it beat "Game of Thrones."  However, it didn't have "The Handmaid's Tale" or "This is Us" to contend with, both of which could upset it. I'm not optimistic about Barbour and Brown, as both have tougher competition in their categories, which they didn't win last year, either.

I was more worried about "The Handmaid's Tale" than "This is Us," but at least I thought the latter was a contender.  Score one-half for me.  I was also right about neither Barbour nor Brown winning.  As a consolation, here are the red carpet interviews of the "Stranger Things" cast beginning with Stranger Things Teens.

Watch the Stranger Things teens walk down the Red Carpet at the 24th Annual SAG Awards!

"Stranger Things" may not have won an award, but they did get the love from the interviewers and fans, as much as the cast of any TV show.

In addition to its nomination for Ensemble in a Drama Series, Peter Dinklage is competing with Harbour for Outstanding Performance by a Male Actor in a Drama Series.  I think Dinklage has a better chance of winning, but I am still giving the advantage to Emmy winner Sterling K. Brown for "This is Us."

Elizabeth Moss of "The Handmaid's Tale" is competing with Brown of "Stranger Things 2" for Outstanding Performance by a Female Actor in a Drama Series and I think she has a better chance of winning as she won the Emmy.  However, the returning winner is Claire Foy, so either of them beating her would be an upset.

Foy won, so I called this one, too.

The closest speculative fiction came to being nominated in comedy, miniseries, or television movies was Geoffrey Rush as Albert Einstein in "Genius" for Outstanding Performance by a Male Actor in a Television Movie or Miniseries.  As great an actor as Rush is, he's not going to win against his fellow nominees, especially Robert De Niro or Alexander Skarsgard.

Skarsgard won, so I claim half of this one.

As for comedy, I will have to settle for Kristen Bell of "The Good Place" as the host.  Too bad she wasn't nominated, but that would have been awkward.

Here is local girl Bell delivering her opening monologue as the first host of the SAG Awards.*


That's a wrap for the SAG Awards.  Tomorrow I'm taking a break from the best Hollywood has to offer to the worst, as the Razzie Awards will be announced later today.  Here's to the worst major studio projects of 2017!

*Yes, she really is.  She grew up in Huntington Woods and went to school at Shrine High School in Royal Oak, a few miles away from where I used to live.