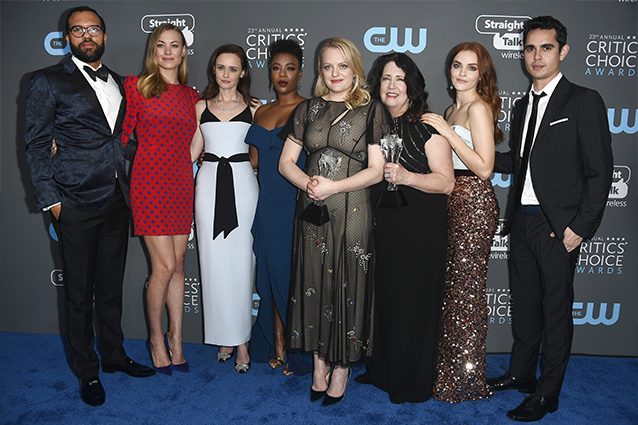 I begin with the three categories in which "The Handmaid's Tale" earned nominations.

This field looks like the one for the comparable award from this year's Emmys with "Westworld" replaced by "Game of Thrones" and "American Gods" filling in for both "Better Call Saul" and "House of Cards."  I'm particularly glad to see "American Gods" recognized for headline awards instead of just technical ones like Main Title Design and Special Visual Effects in a Supporting Role.  That written, I don't think it will win this category.  Nor will the show I'm rooting for, "Stranger Things 2."  Instead, I suspect that a lot of the voters overlap with those for the Television Critics Association Awards, where "The Handmaid's Tale" won the equivalent category plus Program of the Year.  Added to the five awards "The Handmaid's Tale" won on the last night of the Emmys, where it won the equivalent award as well, and I'd say that the Hulu adaptation of Margaret Atwood's dystopian classic is the favorite to win this category.

I was absolutely right, it did.  Watch The Handmaid's Tale Wins Best Drama Critics Choice Awards 2018.


I called the next one as well.

Best Actress in a Drama Series

Half of nominees represent speculative fiction series, Caitriona Balfe for "Outlander," Tatiana Maslany in "Orphan Black," and Elisabeth Moss in "The Handmaid's Tale."  If this were up to a vote of the viewers, Balfe would win.  It's not.  I think it's between the past two Emmy winners for Outstanding Actress in a Drama Series, Maslany, who won last year and Moss, who won this year.  I might have more to say about Christine Baranski, Claire Foy, and Robin Wright, who are all starring in political dramas, in a future entry about political shows nominated for awards.

If pushed, I'd have said Moss would have been favored over Maslany and I'd have been right.  Here's Norman Reedus (Woo, hoo!  Daryl Dixon!) announcing as  Elisabeth Moss Wins Critics Choice Awards 2018.


I'm glad to see and hear her thanking everyone in the collaborative enterprise that is shooting a television program.  Everyone is needed and they are all important.

I have one last category for "The Handmaid's Tale."

Gillian Anderson is the actress playing one of the "new gods" I mentioned earlier.  She plays Media in "American Gods."  Joining her in representing speculative fiction shows is Emilia Clarke and Ann Dowd.  Dowd won the Emmy, so I would say she is the favorite, although Margo Martindale is a perennial winner of the guest actress Emmy Award, so she might be able to pull off an upset in a supporting role.

As I expected, Dowd won again.  Apparently, she didn't expect it, given the excellence of the actresses against whom she was competing.  Watch her reaction in Ann Dowd Wins Supporting Actress Critics Choice Awards 2018.


With that, "The Handmaid's Tale" swept all of the categories in which it was nominated, reminiscent of the last night of the Emmys. 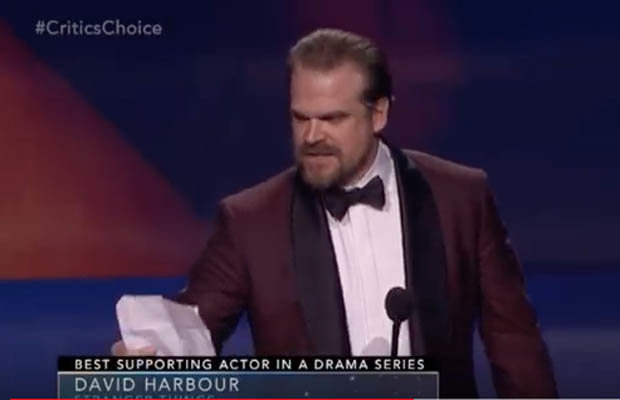 On the one hand, David Harbour is the only member of this field that was nominated in this category at the Emmys.  On the other hand, Peter Dinklage and Bobby Cannavale have both won two Emmy Awards in this category, Dinklage for the same role.  Dinklage has also won a Golden Globe.  I'd give the advantage to the actor of "The Imp."


That was interesting.  Instead of making it about him or the people who helped him, he made it all about his character.  I'm not used to that, but I enjoyed and appreciated it all the same.

Now for a category where I was pleasantly surprised to be wrong.

Best Actor in a Comedy Series

"Atlanta" did not air in 2017, so Emmy winner Danny Glover was not eligible.  I hope that improves the odds for Ted Danson, but instead, I think it will help Thomas Middleditch and Aziz Ansari.

I was expecting Aziz Ansari to repeat his Golden Globes win.  The critics surprised me, awarding the trophy to Ted Danson.


Ha!  Danson is just as funny without a script as with one.

I was wrong about the next category, which was the last speculative fiction winner.

My picks for favorites are "Archer," "Bob's Burgers," and "BoJack Horseman."  If it were up to the fans, "Rick and Morty" or "The Simpsons" would win, but that's not going to happen here.

Well, did I ever get that wrong.  It looks like the critics and the audience agree after all about "Rick and Morty."

All told, speculative fiction shows and their actors won six awards, which is one better than last year, when speculative fiction shows won five in a year when there was an additional category, Best Guest Performer in a Drama Series, that was not awarded this year.  I won't complain about an improvement in numbers with fewer opportunities, especially when the additional win was in live-action comedy.

I have one more category to examine in detail.  I didn't get it right, but I'm fine with it.

Mayim Bialik may be representing the closest thing to a speculative fiction show here, but I know better than to root for her.  Instead, I think the favorite is Rita Moreno, who has an EGOT (Emmy, Grammy, Oscar, Tony).

Well, I should have gone with my first instincts.  Watch as Mayim Bialik Wins Critics Choice Awards 2018 along with bonus Best Foreign Language footage.


Well, at least she was as surprised as I was and had the proper perspective.  If no one else, Rita Moreno has more talent, but she didn't have the better writers and better role this year, Bialik did.  Besides, she's a scientist playing a scientist (no, really, she is) and this role is a natural for her.

Here are the rest of the predictions I made in the categories in which speculative fiction shows and their actors were nominated, but didn't win.

Best Actress in a Comedy Series: "Again, no nominations for "Veep," so Kristen Bell has a chance.  Unfortunately, I don't think it's a good one, as Alison Brie is the star of the most nominated comedy series, so she's running closer to the inside of the track.  The other veteran nominees are Ellie Kemper and Constance Wu, both of whom have easier paths to victory."  The same thing happened to Allison Brie that happened to her show; she lost to Rachel Brosnahan of "The Marvelous Mrs. Maisel."  Both were a surprise to me.

Best Supporting Actor in a Comedy Series: "Kumail Nanjiani is nominated both for his movie work in "The Big Sick" and here for "Silicon Valley," which is as close to a speculative fiction show as one gets in this category.  The other actors who I think have a good chance are Ed O'Neill and Sean Hayes -- never underestimate the power of nostalgia.  I'm not so sure about Marc Maron, even though he is in 'GLOW.'"  The award went to Walton Goggins from "Vice Principals," which I ignored.

Best Movie Made for TV: "The science story here is 'The Immortal Life of Henrietta Lacks,' a story I should have blogged about already, although I mentioned her once.  I'll root for it, but I think the favorite is 'The Wizard of Lies.'"  I called this one, as "Wizard of Lies" won.

Best Actor in a Movie Made for TV or Limited Series: ""American Horror Story: Cult" is the one true speculative fiction show, so Evan Peters is the representative of the genre, but I think I would expect Robert De Niro would be the favorite.  After him would be Bill Pullman, then Ewan McGregor, then Jeff Daniels.  I don't think Peters has much of a chance against that field."  I was right that Peters had no chance, but I was suprised that Ewen McGregor beat Robert De Niro, just as he did at the Golden Globes.  That will teach me to root against Obi Wan Kenobi!

Best Supporting Actor in a Movie Made for TV or Limited Series: "Alexander Skarsgård won the Emmy for "Big Little Lies," so he's my favorite.  Too bad, as "Genius" is the science nominee."  No surprise, Skarsgård won, making it his second trophy in a week after this Golden Globes win.

That's it for speculative fiction and its competitors.  I'll have more to write about diversity in entertainment tomorrow, MLK Day.  Stay tuned.