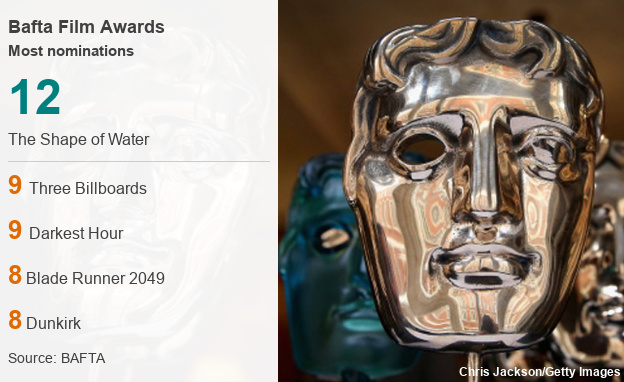 Notice that every one of the nine categories announced (ten if one counts Rising Star) has at least one speculative fiction film or actor/actress in a speculative fiction film.  The same is true of nearly every category.  Those that don't have thrillers or documentaries about science nominated, so all are still on topic for this blog.


Best film
Call Me By Your Name
Darkest Hour
Dunkirk
The Shape Of Water
Three Billboards Outside Ebbing, Missouri

The speculative fiction nominee is "The Shape of Water," which won the Critics' Choice Award.  If this were an American electorate, I'd say its strongest competition would be "Three Billboards Outside Ebbing, Missouri," which won the Golden Globe.  However, this is a British electorate who might favor "Darkest Hour" or "Dunkirk" even though "Three Billboards Outside Ebbing, Missouri" is considered a British film. (!)  I'm still rooting for the monster romance.

I'm still amazed that "Three Billboards Outside Ebbing, Missouri" is considered to be a British film.  If the BAFTA voters accept that, then it has a good chance to win this category.  If they don't, then I still think "Darkest Hour" will win.  As for "Paddington 2," it is the sole speculative fiction film on the list.  It also has three nominations and should have been listed on the most nominated film screen in the video above.

Two speculative fiction films here, "Blade Runner 2049" and "The Shape of Water."  Del Toro has won two awards for directing already, so I think he'll win this one, too.

The only reason I think Sally Hawkins has a chance is that she's British.  Otherwise, it's a battle between great comic leading ladies and great dramatic ones.  I'd give the advantage to McDormand over either Margot Robbie, who won the Critics' Choice Award, or Saoirse Ronan, who won the Golden Globe.  Benning is a great actress, but her performance hasn't been nominated elsewhere.

I'm pleased that Kaluuya was nominated for "Get Out," but he's going to lose, most likely to Oldman, although Day-Lewis might pull an upset.

Janney has been cleaning up and I expect her to continue doing so.  That doesn't mean that I can't root for Spencer.

Between Rockwell and Harrelson, Rockwell has been winning, so I think he's favored.  That will be despite the voters liking Grant in "Paddington 2."

Kaluuya is known for "Get Out," but Tessa Thompson also acts in speculative fiction films like "Thor: Ragnarok" and television series like "Westworld."  That written, I think Chalamet is going to get the award.

Outstanding debut by a British writer, director or producer
The Ghoul
I am Not A Witch
Jawbone
Kingdom Of Us
Lady Macbeth

"The Ghoul" is a thriller with fantastic elements, but it's not the film I think will win.  That honor goes to "Lady Macbeth."

The closest thing to a speculative fiction film is "The Handmaiden," which is a thriller that won the 2017 Saturn Award for Best Foreign Language Film, but I think the contest is between "The Salesman," which won an Oscar, and "Elle," which was nominated for one.  The spoiler might be "First They Killed My Father," which I expect will be nominated for an Oscar this year.

Time to update my ranking of the top political documentaries of 2017 since the WGA film nominees.  With these nominations, both "City of Ghosts" and "Jane" now have 12 points, tying them with "Strong Island" for the most nominated documentaries of last year.  In addition, both "An Inconvenient Sequel" and "Icarus" have eight points, which puts them even with "Quest," which will not be nominated for an Oscar.  Finally, "I Am Not Your Negro" was one of last year's Oscar nominees.  I'll pick "Jane" as the favorite.

Animated film
Coco
Loving Vincent
My Life As A Courgette

"My Life As A Courgette" is really "My Life As A Zucchini," one of last year's Oscar nominees.  I don't think it will beat "Coco."

Original screenplay
Get Out
I, Tonya
Lady Bird
The Shape Of Water
Three Billboards Outside Ebbing, Missouri

This will be a fight between "Get Out" and "Three Billboards Outside Ebbing, Missouri."  I'm rooting for "Get Out" but I'm not optimistic.

"Call Me By Your Name" is my pick to win this, as it won the Critics' Choice Awardds.  The next best bet would be "Molly's Game."  Sorry, "Paddington 2," the only speculative fiction nominee, just be happy to be nominated for three awards.

I'm still rooting for Desplat and "The Shape of Water."  I've listened to the soundtrack and it really is beautiful.

"Blade Runner 2049" won this category at the Critics' Choice Awards and it's a science fiction film, so I'm rooting for it here.  Just the same, I'd be happy if "The Shape of Water" won instead.

While both "Blade Runner 2049" and "The Shape of Water" were nominated, "Baby Driver" won at the Critics' Choice Awards, so I expect it will win here, too.

I'm rooting for "The Shape of Water."

Let's see if turning Gary Oldman into Winston Churchill is enough to win this category at these awards, too.

Three speculative fiction films earned nominations in this category, including the first of two for "The Last Jedi" to go with its first nomination at the Art Directors Guild Awards.  It hope it wins, but I really have no idea.  Who knows, "Dunkirk" might pull this off.

"War For The Planet Of The Apes" won this at the Critics' Choice Awards, but it did not have "Star Wars: The Last Jedi" as competition.  Again, I'm hoping for "The Last Jedi" to win.

This is the first I've heard of any of these, but the default assumption about animation is that it is speculative fiction, so I don't have to worry about these films qualifying.

Other than foreign language films, this is probably the weakest category for speculative fiction, with a couple of thrillers being the closest one gets.  Two of them, "Aamir" and "A Drowning Man," look interesting.  However, I suspect "Cowboy Dave" has a better shot.