WXYZ on meteor explosion over Michigan 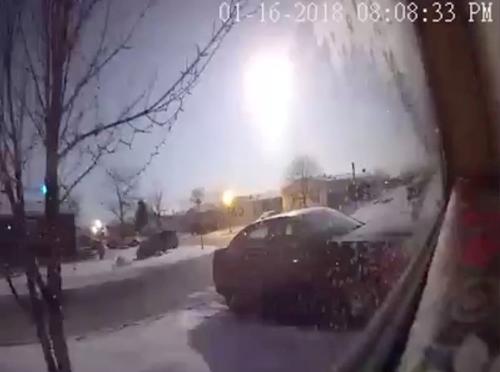 I told my readers to "stay tuned for more fantasy tomorrow as I write about the BAFTA nominees" at the end of yesterday's post about the Art Directors Guild Awards, but that's not happening today.*  Instead, I'm sharing a day's worth of coverage from WXYZ on the meteor that exploded over southeast Michigan during the evening of the 16th.

The coverage began with National Weather Service: Bright light, loud sound over SE Michigan was 'a likely meteor', which was from the 11 P.M. newscast on the 16th.

The National Weather Service says the bright flash and loud noise that has been heard throughout southwest Michigan was "likely" a meteor, but they will continue to monitor feeds.

By the next morning, the meteor was confirmed as WXYZ reported Meteor lights up metro Detroit.

People across the area are still talking about the meteor that lit up the night sky over Michigan.

I'm with Sima Chowdhry; I missed it entirely, while friends of mine at work and on Facebook caught it.  I didn't even find out until the next morning when I was asked if my students could use articles about the meteor for extra credit (of course the answer was yes).  Darn.

The day after a meteor lit up the sky over Michigan, people were out looking for chunks of it as scientists explain exactly what happened.

It's amazing what the possibility of striking it rich will inspire people to do.

The hunt continued in Head of astronomy at Cranbrook says meteor debris may have landed near Mount Clemens.

Metro Detroit is waking up this morning after last night's meteor madness, wondering what exactly happened.

I hope the people actually found a meteorite.  As for the story, it's one I can tell for years whenever the subjects of meteors, meteorites, and asteroid stikes come up.

*I still plan on posting that entry tomorrow.  Stay tuned.
Posted by Pinku-Sensei at 12:00 AM