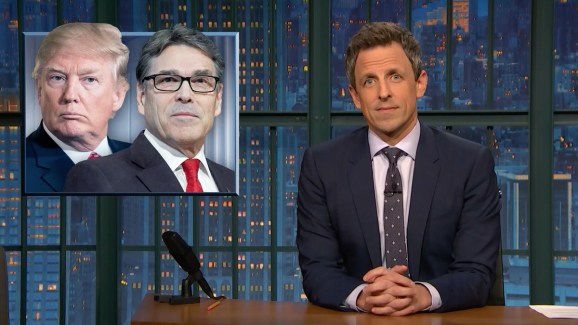 Happy National Cut Your Energy Costs Day and Save the Eagles Day!  These are the two national days I promised to celebrate at the end of both 'Wonder Woman' joins 'The Shape of Water' and 'Get Out' among PGA film and TV nominees and 'The Shape of Water' and 'Coco' -- fantasy and diversity both winners at the Golden Globes.  Instead of celebrating energy conservation, I'm celebrating something that will reduce the cost of energy.  Newsy reports Commission Shuts Down Rick Perry's Proposal To Prop Up Coal, Nuclear.

Yes, that was a dumb idea that was going to add carbon dioxide, soot, mercury, and radiation to the atmosphere and cost Americans more money, too.  It was such a dumb idea that Seth Meyers made fun of it and Perry in The Check In: Rick Perry and the Department of Energy.

Seth checks in on Rick Perry, the man President Trump chose to lead the Department of Energy, an agency that Perry once wanted to abolish.

The last time I posted Seth Meyers making fun of Perry, I told my readers to expect Aggie jokes whenever I blogged about him again.  I think the clips Meyers used satisfy that promise.

Meyers mentioned Bob Murray and Murray Energy, which reminded me that I mused about "following up on Last Week Tonight with John Oliver's 'Coal,'" which won Television Episodic Comedy at the 2017 Environmental Media Association Awards for film and television.  Murray and his company play a major role in that segment, so I think now is the opportune time to post it.  Follow over the jump.

We’ve heard a lot of talk about coal miners in the last year, but what are the real issues surrounding coal? John Oliver and a giant squirrel look into it.

While that segment earned Oliver and HBO an EMA Award, it also drew the unwelcome attention of Murray and his company.  The Washington Post reported that in Why a coal titan is suing John Oliver for defamation.

In a segment on the decline of the coal industry and President Trump’s promises to bring it back, John Oliver railed against the Murray Energy Corporation and chief executive Robert E. Murray.

As George Takei would say, oh, my!  Good luck to Oliver, HBO, and Time-Warner in defending against this frivolous strategic lawsuit against public participation (S.L.A.P.P.).

I did promise something about hawks for National Save the Eagles Day.  Here is Red-Tailed Hawks: Last Week Tonight with John Oliver (HBO).  Sorry, he didn't have anything about eagles.

A combined civics and nature lesson -- I couldn't pass it up.  Maybe next year, I'll actually have something about eagles for this day.