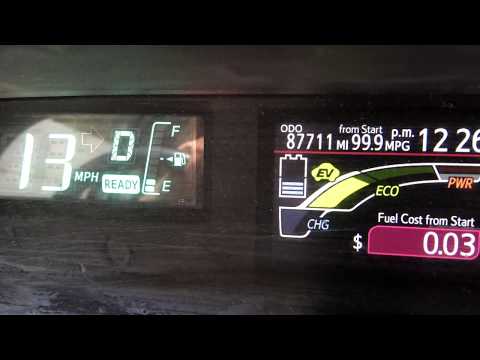 Pearl the Prius will turn over 39,000 miles by the time I roll into the driveway tonight, so it's time for a driving update.

In other news, Pearl's 12 volt battery died last month, which meant some of the programming the car had when I bought her was lost.*   Before, the dashboard showed the number of miles worth of gas left.  After the new battery was installed, it showed the miles per gallon.  That's when I found out that the car could get 99.9 MPG while coasting, hence the image I used to illustrate this entry.  It's much more entertaining, but not as informative as knowing how many miles of gas remain in the tank.

Follow over the jump for three videos about Tesla, a topic that has become a tradition with these updates.

Looks like USA Today was having fun with this.  I doubt Tesla and Elon Musk would have its servers in anything as retro as roller skates (Comet does that) unless they could find some high-tech angle.

Next, TechCrunch has a Tesla Model 3 review.

The Tesla Model 3 achieves everything Tesla intended with this car: It’s fast, fun to drive, relatively affordable and has great electric range. The only downside is that you’ll have a heck of a time getting one.

It was fun watching that, especially the central California coast scenery, but I'll stick with my Prius, thank you very much.

Finally, in a follow up to SpaceX launches Falcon Heavy as Colbert crowns Musk 'King Nerd', here's SpaceX's Falcon Heavy & Starman, in which a Tesla Roadster has a featured role.

When Falcon Heavy lifted off, it became the most powerful operational rocket in the world by a factor of two. With the ability to lift into orbit nearly 64 metric tons (141,000 lb)---a mass greater than a 737 jetliner loaded with passengers, crew, luggage and fuel--Falcon Heavy can lift more than twice the payload of the next closest operational vehicle, the Delta IV Heavy, at one-third the cost.

Following liftoff, the two side boosters separated from the center core and returned to landing site for future reuse. Falcon Heavy put a Tesla Roadster and its passenger, Starman, into orbit around the sun.

That's it for this driving update.  Stay tuned for the last entry of the seventh year of Crazy Eddie's Motie News, a post about the Vernal Equinox.

*The car is four or five years old and it was likely the original battery, so this was not out of the ordinary.  Next, the tires, which should be replaced at 40,000 miles anyway.