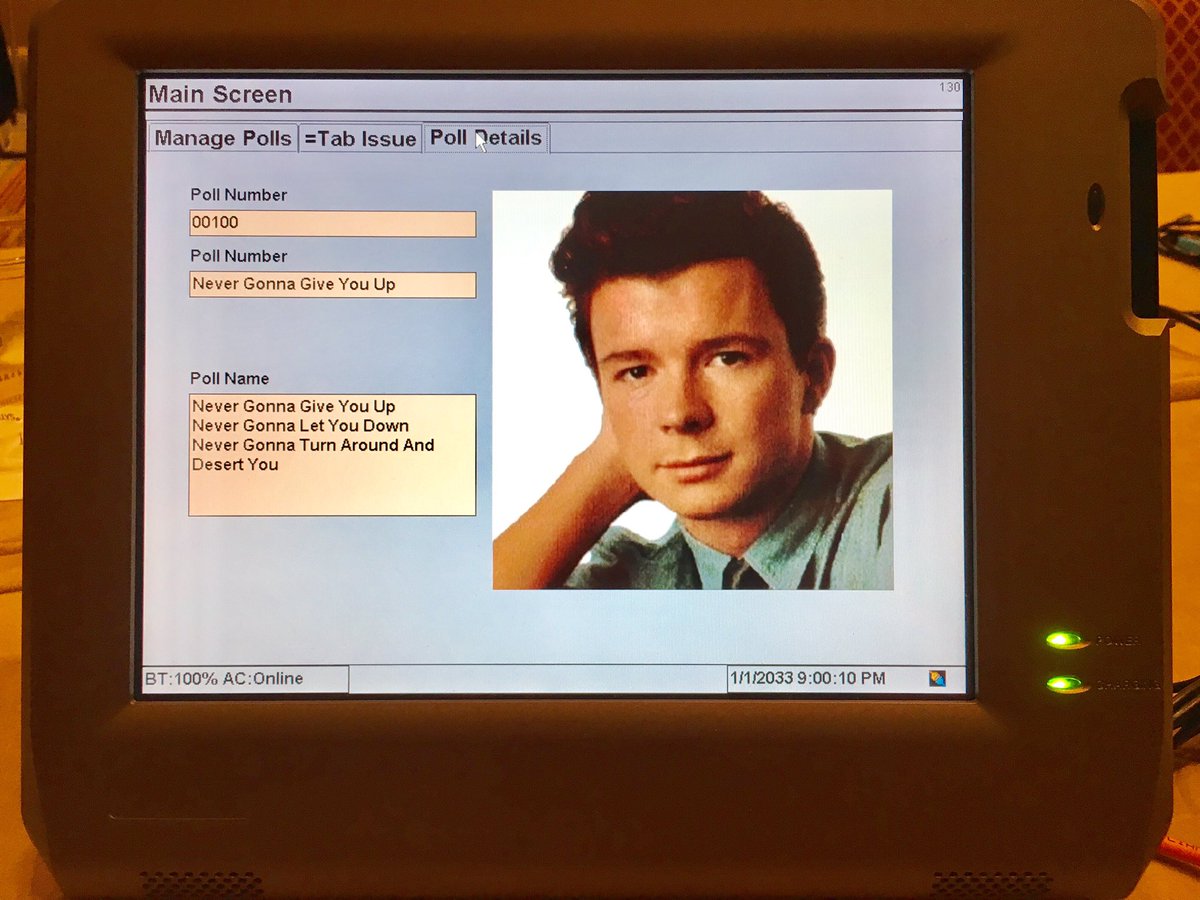 It will be April Fools Day in two days, which reminds me that in the very first April Fools post on this blog, I asked my readers "Hey, what did you expect out of me today, a rickroll?"  (Yeah, I rickrolled my readers.)  It turns out the First Lady and I aren't the only ones still using this staple of 21st Century trolling.  ProPublica reported on another in Election Security a High Priority — Until It Comes to Paying for New Voting Machines.


[E]lection officials are still concerned about systems’ vulnerability to hacking by bad actors who gain access to individual machines on Election Day, and about the public’s ability to draw a distinction between small-scale in-person hacks and large-scale remote ones. There is no shortage of demonstrations of the former. Over a long weekend last summer, hackers at a conference in Las Vegas, DefCon, managed to breach all five models of paperless voting machines, as well as an electronic poll book. The hack received a great deal of media attention. One machine, called a WINvote by Advanced Voting Solutions, was hacked in under two hours and reprogrammed to play Rick Astley’s 1987 song “Never Gonna Give You Up.”

That seems silly, but Vox shows how serious it really is in US voting machines are failing. Here’s why.

The greatest threat to American voting machines might not be hacking, but old age.
...
In our latest collaboration with ProPublica, we take a look at US election security and the status of American voting machines.
...
In 2017, hackers Rick Rolled a voting machine in Las Vegas. Even though the machine was out-of-date and the demonstration didn’t replicate real-life conditions, the stunt brought national attention to an election crisis that has been building ever since the “hanging chad” fiasco that occurred during the 2000 Presidential election recount.
In her story on American election security, ProPublica’s Kate Rabinowitz revealed that many state and local election officials are suffering a funding crisis. Without the money needed to maintain and update electronic voting machines, officials are having to make do with equipment that was manufactured in 2008 or even earlier. At that time, most machines had recently been replaced thanks to the 2002 Help America Vote Act, but few have been updated since.
By isolating machines from the internet and keeping them in secure locations, officials are able to reduce the threat of widespread hacking, but the machines are plagued with more mundane technical problems that states have been slow to address and could have major consequences for future elections.
On the bright side, the omnibus spending bill that was passed in March 2018 allocated $380 million dollars for state election officials to update their voting infrastructure. Whether that money is actually provided and how it will be spent, however, remains to be seen.

I hope that money actually makes it to the states and municipalities that need it.  I also hope the state and local governments heed the warning in ProPublica's report: "For others, though, the DefCon report was a resounding signal to end the use of paperless voting machines."  That's no April Fools.

Stay tuned for the last post of March, followed by a real April Fools post.  A drum corps Easter on April Fools Day anyone?
Posted by Pinku-Sensei at 12:37 AM