Three factors contributed to the slight mileage increase.  First, I drove Snow Bear for a couple of weeks as my car was snowed in and then briefly disabled, pushing the new car's miles up and mine down.  Second, Snow Bear was disabled for more than two weeks as she had to have two tires and a rim replaced after hitting a pothole, taking the miles I drove off.  Finally, my wife drove to visit our daughter in Chicago.  Just under half of the trip will show up on the next report, so the increase was smaller than it could have been.  Just the same, I don't regret it.  As I've written before, family is a priority.

Our efforts won't show up on the next graph from Doug Short, which only records total vehicle miles driven in the U.S. up to the end of last year.  Still, it does show that the rate of increase is still slow. 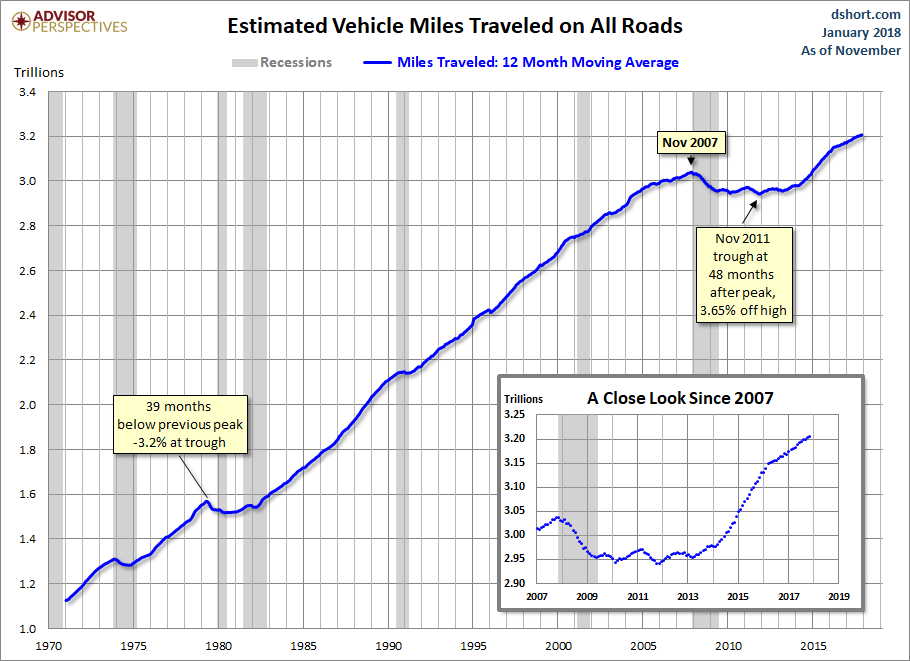 "Travel on all roads and streets changed by 0.7% (1.8 billion vehicle miles) for December 2017 as compared with December 2016. Travel for the month is estimated to be 261.8 billion vehicle miles." The 12-month moving average was up 0.06% month-over-month and 1.2% year-over-year. If we factor in population growth, the 12-month MA of the civilian population-adjusted data (age 16-and-over) is unchanged at 0.00% month-over-month and up only 0.7% year-over-year.

I expect April to be a month without a driving update.  The next one, for Pearl, should come in May.  Let's see if I'm right.
Posted by Pinku-Sensei at 8:53 AM