The latest from Vox on the gun control debate 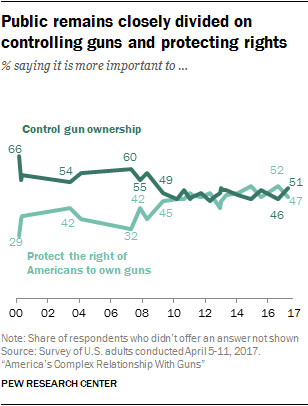 It looks like I'm in a mood to write about guns and gun control.  Yesterday, it was the music at March For Our Lives.  Today, it's an examination of two videos posted by Vox about the debate over gun control.  The first was What students really think about school shootings posted on March 23rd.

We asked students across the US to share their thoughts on school shootings. Over 1,600 responded.
...
To see how students across the country really felt about school shootings, we put out an open request for students to send us their thoughts. Here are some of their responses.
Gun violence, particularly school shootings, ranks among the most contentious issues in America. Since the February 14, 2018 shooting at Marjory Stoneman Douglas High School in Parkland, FL, mass shootings have again become a staple of the news cycle.
This school shooting is distinguished from previous ones, because students around the nation have rallied to organize for safer schools. Whether that means stricter gun control, metal detectors, regulating ammunition sales, or arming teachers, remains unclear.

That's gripping testimony from our youth.

The next day, Vox posted How the NRA hijacks gun control debates.

Why is the NRA -- a group that represents the interests of gun manufacturers -- taken seriously in debates about reducing gun violence?
...
After the mass shooting at a high school in Parkland, Florida, news networks are once again focused on the debate over gun control. These debates often pit gun control activists against the National Rifle Association (NRA), which claims to speak on behalf of gun owners. But in reality, the NRA represents the interest of gun manufacturers.
The group gets millions of dollars in donations from gun companies every year, and millions more through the sale of ad space in NRA publications. That financial allegiance means the NRA is similar to organizations like the Tobacco Institute -- an industry lobbying group primarily interested in protecting their product.
So why do news networks keep inviting them to debate gun violence?

I agree with the analysis; the NRA may have started off as a public interest group, but it's now an industry lobbying group.  I found comparing them to the Tobacco Institute to be a clever one; not only does it point out how the NRA is a lobbying group, but gives hope to the proponents of gun control.  Prolonged activism and legal action eventually defeated the tobacco companies and smoking declined.  The same could happen to the NRA.

I have more to say about this topic, as two of the top posts of the seventh year of this blog, Doctors to Congress: Fund gun violence research at the CDC and NIH and Instructions on how to deal with an active shooter, cover the topic.  Look for a retrospective entry on those two posts along with an update on at least one of them.  Stay tuned.
Posted by Pinku-Sensei at 9:00 AM