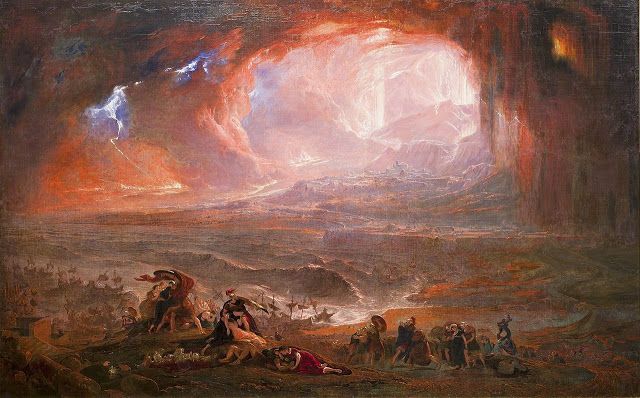 "Beware The Ides of March!"  That's how I concluded Three pie songs and a pie drink for Pi Day 2018.  Over at Booman Tribune, I told my readers there what form today's doom would take, writing "I'll return tomorrow with songs and drinks inspired by the destruction of Pompeii" in the comments there.  More death and destruction in the Roman World for the Ides of March!

I begin the festivities with Siouxsie & The Banshees - Cities In Dust [Music Video].

Those are the songs for today.  Now for the drink, the Lava Flow from Tipsy Bartender.

The most awesome blended drink ever...THE LAVA FLOW! Cocktails are mighty personal things, and people can have vastly different preferences for what kind they like. But we're going to go out on a limb here and say that EVERYONE will love this drink! Fruit and rum is already a badass combination, and with the extra sweetness of cream of coconut, this drink is unbeatable. Close your eyes as you take a sip and it's easy to imagine that you're laying on a tropical white sand beach. Mmm!
...
LAVA FLOW
1oz Light Rum
1oz Coconut Rum
2oz Strawberries
1 Banana
2oz Pineapple Juice
2oz Cream of Coconut

I'm an environmentalist and I recycle, which is why I beg my readers' forgiveness by not reusing the recipes in Drink a Flaming Volcano for Jindal.  I decided to do something new today, even if the readers of Booman Tribune haven't seen my old material before.  Surprise!
Posted by Pinku-Sensei at 12:00 AM