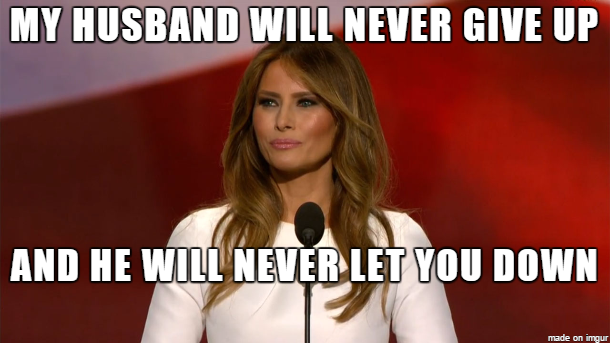 "Excuse me, I'm going to watch 'Young Za Za Gabor' AKA Melania Trump speak." So read the Facebook status I left last night when I went from one screen to another to watch what I expected to be the highlight of last night's session of the Republican National Convention. I was not disappointed and got more entertainment value than I was expecting. To begin with, Mrs. Trump rickrolled the audience.


I caught that instance of copying at the time, but I didn't catch the next one until after the speech: Comparing Melania Trump and Michelle Obama's speeches.

I should have been appalled at this. Instead, it amused me even more. Thanks to Melania, I've had my daily dose of irony.
Posted by Pinku-Sensei at 9:15 AM