'Jane,' 'Icarus,' and 'Blue Planet II' — Nature, science, and politics in documentaries at the Creative Arts and Primetime Emmy Awards

For this week's Sunday entertainment feature, I am continuing my examination of science and nature at the 70th Emmy Awards that I began last week writing about Bill Nye, Neil deGrasse Tyson, and NASA being nominated by moving on to the documentaries.  I begin by quoting a paragraph from 'Flint' and 'Jane' win environmental movies of the year at 2018 EMA Awards.


I wrote an entire entry about "Jane" being the best documentary not nominated at the 2018 Oscars, so of course I'm thrilled that it won this honor.  It deserved it, especially against the relatively obscure competition it had.  Just the same, I now have more movies I can recommend to my students as extra credit films they can watch.  As for "Jane," I predicted that "both 'Jane' and 'Abacus' will be eligible for News and Documentary Emmy Awards this fall, where they will be favored in their categories."  Both are nominated for those awards, so I will write more about them in the near future.  In the meantime, congratulations!

As for which will win, note that only "Jane" has more than one nomination at the Emmy Awards; all the rest only earned single nominations for Exceptional Merit in Documentary Filmmaking.  To establish a ranking, I'll let the points system I've used before tell the tale.  Adding one point for each of the seven nominations and two points for the EMA Award to the 29 points "Jane" had as of March 3rd yields 38 points, while adding the EMA Award and four missing nominations to the awards I count listed on the documentary's IMDB page yields 42 points.  Before this nomination, "City of Ghosts" had 25 points from awards programs other than film festivals.  With the Emmy nomination, it has 26.  "Strong Island" had 16 points in March; it now has 21.  "What Haunts Us" only has one, although I suspect this will change, as the film was released in 2018 and is eligible for awards for this year's documentaries.  Just the same, the numbers support my personal preference, which is for "Jane" to win. 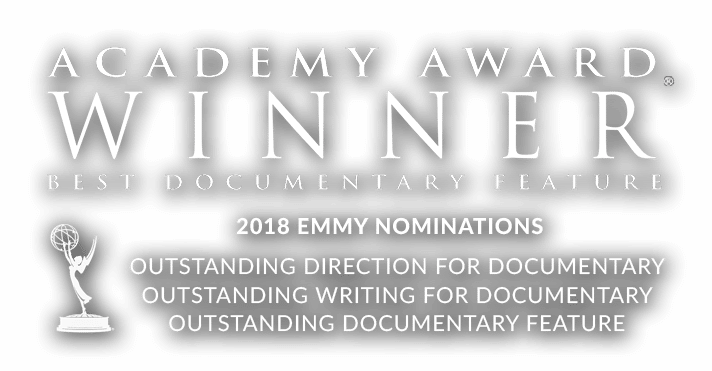 "Icarus" has already won Documentary Feature at the Academy Awards.  Now the movie has a chance at three Emmy Awards — Outstanding Documentary or Nonfiction Special, Outstanding Directing for a Documentary/Nonfiction Program, and Outstanding Writing for a Nonfiction Program, the latter two in direct competition with "Jane."  Despite its winning an Oscar, I'm not sure that "Icarus" is the favorite to win Outstanding Documentary or Nonfiction Special, as its competition consists of "Jim & Andy: The Great Beyond - Featuring A Very Special, Contractually Obligated Mention Of Tony Clifton," "Mister Rogers: It's You I Like," "Spielberg," and "The Zen Diaries Of Garry Shandling," four nominees about show business, three of them about Hollywood.  As I mentioned for "Birdman" and Meryl Streep narrating "Five Came Back" last year and "Heaven is a Traffic Jam on the 405," a film about Hollywood "is enough to get the Motion Picture Academy members to vote for it if all other factors are equal" and "Never underestimate the power of Hollywood voting for a good film or show about itself."  The best hope for "Icarus" lies in the films about Hollywood splitting the vote and the same anti-Trump sentiment that led to "The Handmaid's Tale" sweeping the last night of the Emmys to win five awards last year combines with the continued anti-Russian sentiment that helped it win an Oscar inducing people to vote for it instead of "Mister Rogers: It's You I Like," the other nominee that anti-Trump sentiment in Hollwood might rally around.  I'm not optimistic, but then I didn't think "Icarus" would win the Academy Award, either. 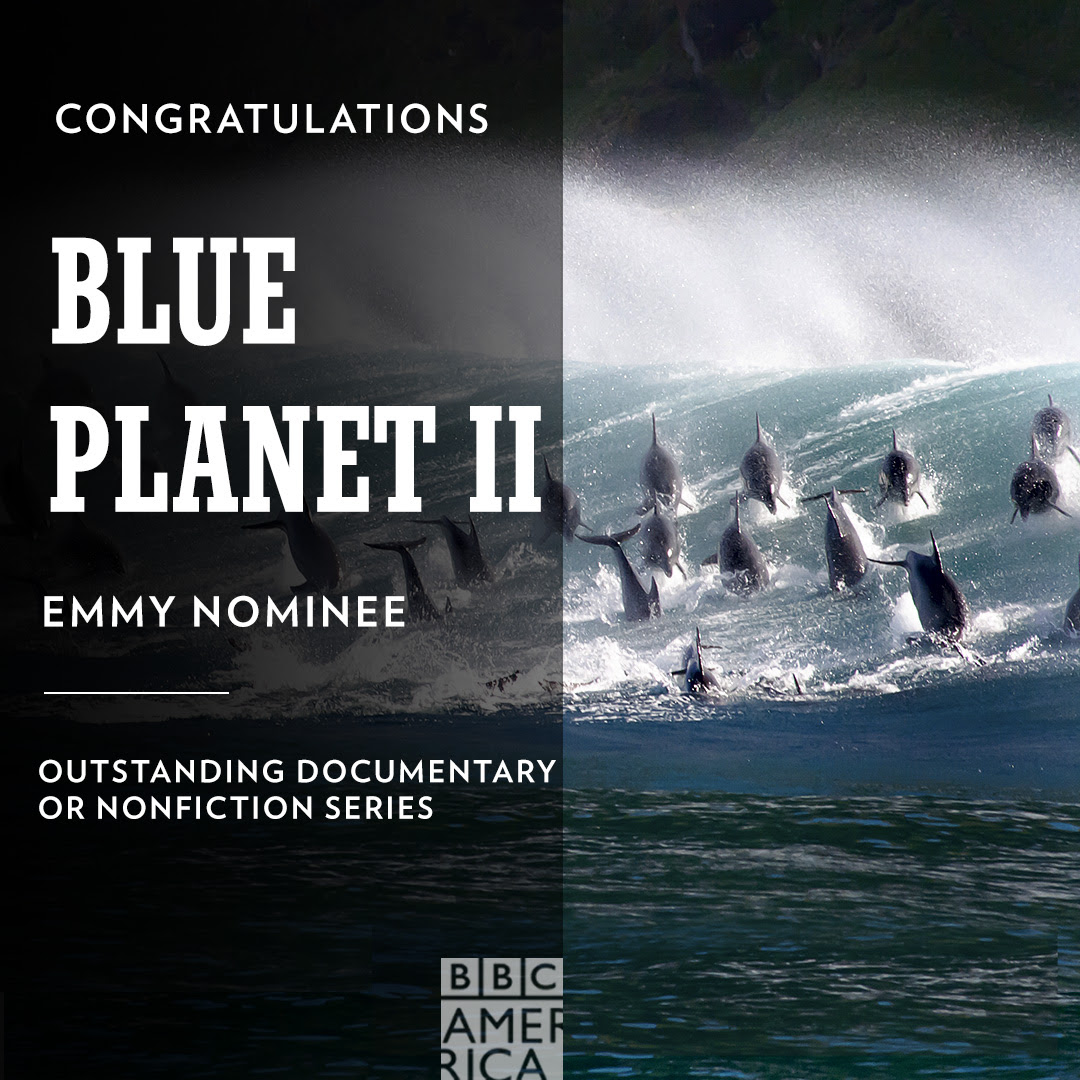 When I first wrote about "Blue Planet II," it was in the context of looking forward to this year's Emmys.


I fully expect this series' score to be nominated along with more nominations for Outstanding Documentary or Nonfiction Series and Outstanding Cinematography for a Nonfiction Program -- but my readers and I won't know that until next summer.  Stay tuned.

However, the BBC nature documentary series does not stand alone as the most nominated show competing for Outstanding Documentary or Nonfiction Series.  It shares that honor with "The Defiant Ones" about the role of Dr. Dre in rap and hip-hop and "Wild Wild Country" about the Rajneesh Movement and especially Rajneeshpuram, each also with five nominations.  The other nominees in the category, "American Masters" and "The Fourth Estate," only have the one nomination for Outstanding Documentary or Nonfiction Series.  The nominee I expected in addition to "Blue Planet II" was "The Defiant Ones," which won Best Music Film at the Grammy Awards.  I wrote then "I expect to blog about it again, as it will be eligible for this year's Emmy Awards" and, sure enough, I am.  As a show business entry with a message of African-American struggle and empowerment as well as cross-racial friendship, themes that would attract an anti-Trump Hollywood electorate, it would be the nominee I think would be favored if all things were equal.  I don't think they are, as the team behind "Blue Planet II" is the same one behind "Planet Earth II," which won two Emmy Awards last year, so I think it's still the favorite.  The other nominee that might attract votes based on anti-Trump sentiment is "The Fourth Estate," which follows the reporters of the New York Times.  That didn't help "The Post" win any Oscars despite its nominations, so I don't think it will push "The Fourth Estate" onto the podium next month.

Just the same, my analysis is not complete without looking at the numbers.  Again, using my points system of one point for a nomination and two for a win, "Blue Planet II" has 22 points, "The Defiant Ones" has 20, "Wild Wild Country" has five, "American Masters" has three for the current season, and "The Fourth Estate" has one.  By this measure, "The Defiant Ones" is indeed the strongest competition for "Blue Planet II."

Follow over the jump for the rest of the categories in which these shows and their competitors are nominated.

The nominees for Outstanding Cinematography For A Nonfiction Program pit nature against cuisine with "Jane" and two episodes of "Blue Planet II" representing nature, while one episode each of "Anthony Bourdain: Parts Unknown" and "Chef's Table" competing for cuisine.  What a tough category!  I think "Blue Planet II" is the favorite based on the win for "Planet Earth II" in this category last year, but I wouldn't be surprised if "Jane" pulls out an upset.

Episode 8 of "The Vietnam War" by Ken Burns joins "Icarus," "Jane," "Wild Wild Country," and "The Zen Diaries of Gary Shandling" in competing for Outstanding Directing For A Documentary/Nonfiction Program.  So far, "The Vietnam War" is the only work I've seen nominated both at the Creative Arts/Primetime Emmy Awards, where it has four nominations, and at the News & Documentary Emmy Awards, where it has two nominations.  Because of that, it might deserve an entry all by itself.  Tallying its wins and nominations at its IMDB page then adding the missing Emmy nominations from both television academies gives it 15 points.  That would put it behind "Jane" with 42 and "Icarus" with 17, but that might not matter, as Ken Burns is legendary and so might even be favored.  Out of the entire field, only "Icarus" earned a nomination at the DGA Awards, so I think it's the next best bet, the highest score for "Jane" not withstanding.

More of the multiple nominees for documentaries and nonfiction appear as nominees for Outstanding Picture Editing For A Nonfiction Program, The Lagos episode of "Anthony Bourdain: Parts Unknown," Episode 3 of "The Defiant Ones," "Jane," Part 3 of "Wild Wild Country," and "The Zen Diaries Of Garry Shandling."  In this category, I think it's a contest between "The Defiant Ones" and "Jane" — nature versus show business.  On that basis, I might give the edge to "The Defiant Ones."

Nature versus show business is also one of the themes in the nominees for Outstanding Sound Editing For A Nonfiction Program (Single Or MultiCamera) with "Blue Planet II" and "Jane" again representing the wild world while "The Defiant Ones" competing for entertainment.  Joining them are the Seattle episode of "Anthony Bourdain: Parts Unknown" and Episode 6 of "The Vietnam War."  Based on "Jane" winning the MPSE Golden Reel Award, I would say it's favored.

Nearly the same nominees appear in Outstanding Sound Mixing For A Nonfiction Program (Single or Multi-Camera) with "Wild Wild Country" replacing "Blue Planet II."  Again, based on "Jane" winning the Cinema Audio Society award, I think it's favored, although "Anthony Bourdain: Parts Unknown" earned a nomination in its category.

The usual suspects are also competing for Outstanding Writing For A Nonfiction Program, "Anthony Bourdain: Parts Unknown," "The Defiant Ones," "Icarus," "Jane," "Mister Rogers: It's You I Like," and "The Vietnam War."  Once again, I consider "Jane" to be the front runner because it won the Writers Guild of America (WGA) award for Documentary Screenplay with "The Vietnam War" to be its strongest competition as it was nominated for Documentary Script - Other than Current Events.

Nature documentaries and series compose a majority of the nominees for Outstanding Narrator.  In addition to Sir David for "Blue Planet II," Morgan Freeman earned a nomination for "March Of The Penguins 2: The Next Step" and Charles Dance for "Savage Kingdom."  Joining them are Carl Reiner for "If You're Not In The Obit, Eat Breakfast" and Liev Schreiber for "24/7."  As much as I'm rooting for Sir David, I think Morgan Freeman, the voice of God, is the favorite.

Speaking of "March Of The Penguins 2: The Next Step," it is also nominated for Outstanding Music Composition for a Limited Series, Movie or Special (Original Dramatic Score).  I plan on writing about that category either when I write about music nominees or when I write about limited series like "Black Mirror" or "Philip K. Dick's Electric Dreams" when I cover speculative fiction nominees.  Stay tuned.
Posted by Pinku-Sensei at 12:38 PM