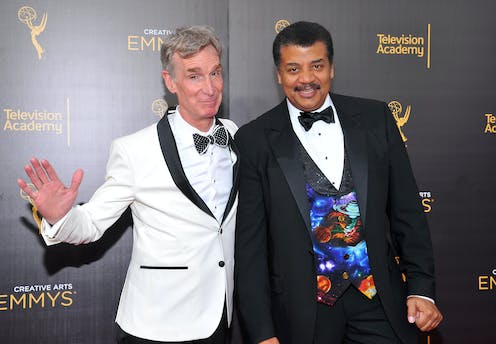 I begin with Bill Nye Saves The World.  The Netflix series has earned a nomination for Outstanding Production Design for a Variety, Reality, or Reality-Competition Series.  This is almost identical to the nomination it earned last year for Outstanding Production Design for a Variety, Nonfiction, Reality, or Reality Competition Programming.  Congratulations on the near-repeat!  On the other hand, Nye's series is competing against "Dancing With The Stars," "Last Week Tonight With John Oliver" (the episode on the now-dead Sinclair-Tribune merger and long-dead Warren G. Harding I already wrote about), "Saturday Night Live," and "The Voice."  "Saturday Night Live" won this Emmy Award last year and I think it's favored again this year.  As I wrote last year, "Bill Nye and Netflix should just be happy to get the nomination."

"Bill Nye Saves The World" missed out on being renominated for Outstanding Writing for Nonfiction Programming this year, a category it lost to "13th" last year.  I'm not surprised, as this year's nominees compose a tough field, which I plan on writing about later.  In the meantime, here is the Official Trailer for Season Two.

He's a science guy. An entertainer. A spiffy dresser. And he's back to drop some knowledge on life-changing topics.

Once again, I'll have to watch this show; I know my students are.

"StarTalk With Neil deGrasse Tyson" earned a fourth nomination for Outstanding Informational Series or Special, a repeat from last year.  This joins its nomination for Reality Television at the 2018 EMA Awards, where I mentioned its Emmy nomination.

I'd have rooted for "StarTalk with Neil deGrasse Tyson," as it was nominated for an Emmy last year and again this year.  It lost to "Vice," which it is competing against for Outstanding Informational Series or Special this year, just as it was last year.  I'll be writing about both later, especially "Vice," which also has nine News and Documentary Emmy nominations.

I doubt either "StarTalk" or "Vice" will win.  Instead, I think it will be either “Leah Remini: Scientology and the Aftermath,” which won this category last year, or Anthony Bourdain: Parts Unknown, which won the category the four years before that.  Because of Bourdain's recent suicide, I suspect his show has the inside track.  As for "My Next Guest Needs No Introduction With David Letterman," I will tell the show and Netflix the same thing I said about "Bill Nye Saves the World," just be happy to be nominated.

I'll write about "Anthony Bourdain: Parts Unknown" and its competitors in the other six categories in which it is nominated later, but before I do, I'm being a good environmentalist and recycling what I wrote in June.

I'm sure I'll be writing about Emmy nominations for both Bourdain and "Parts Unknown" next month, just as I will for R.I.P. Stephen Hawking 1942-2018.  Those will be bittersweet experiences.

"Stephen Hawking's Favorite Places" was not renominated at the News and Documentary Emmy Awards this year, but he was a guest in an episode of StarTalk with Neil deGrasse Tyson.

That sort of makes up for the lack of a nomination for Hawking.

Follow over the jump for NASA/JPL's nomination as well as two nominees that I consider to be honorary entries about space.

Moving even farther out into space, "NASA JPL: Cassini's Grand Finale" earned a nomination for Outstanding Original Interactive Program.  This is the video I probably should have used instead the NASA news clip I included in Goodbye, Cassini!

The final chapter in a remarkable mission of exploration and discovery, Cassini's Grand Finale is in many ways like a brand new mission. Twenty-two times, NASA's Cassini spacecraft will dive through the unexplored space between Saturn and its rings. What we learn from these ultra-close passes over the planet could be some of the most exciting revelations ever returned by the long-lived spacecraft. This animated video tells the story of Cassini's final, daring assignment and looks back at what the mission has accomplished.

Joining "Cassini's Grand Finale" as a nominee in the category is "Back To The Moon," a glorified Google doodle.  The nomination is probably for the 360 version, but I'm embedding the theatrical version instead.

That's much more speculative fiction, both fantasy and science fiction, than science or space, but it's a fun clip just the same.

The final nominee that earned an honorable mention for being about space was "Earth: Shot On iPhone," a nominee for Outstanding Commercial.  I included it because it quotes Carl Sagan from "Pale Blue Dot."

Our only home. Shot on iPhone through the lens of everyday users. Written and narrated by Carl Sagan, from the book, Pale Blue Dot — A Vision of the Human Future in Space.

That's cool.  I'll discuss it and the other nominees for Outstanding Commercial, "Alexa Loses Her Voice," "In Real Life - Monica Lewinsky - Anti-Bullying," "It's A Tide Ad - Tide," and "The Talk - P&G - My Black Is Beautiful," in a future installment about the public service announcement entries among them.  Stay tuned.