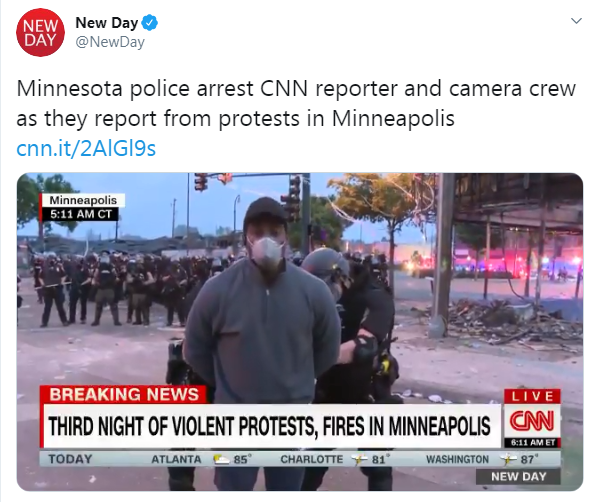 I compared 2016 to 1968 at least three times four years ago, beginning with The torches and pitchforks came out for Trump last night in March of that election year.

As for ABC News' comparison of today to the summer of 1968, I think it's a better analogy than Weimar Germany. We're not at either place yet, but 1968 is only blocks away and we're headed right for it.

We're there again, including what I thought made the media coverage of the Trump campaign more adversarial four years ago.

What is new is that Trump has actively antagonized the press...That's called picking a fight with people who buy ink (or pixels) by the barrel...an action that Mark Twain advised should be avoided at all costs...Now, the targets of violence have expanded from protesters to the press. That's guaranteed to make coverage more hostile.

Police all over the country have made the same mistake, as the Washington Post reported in Police appear to target journalists as they cover George Floyd protests.

Some on-air journalists have become the target of attacks while covering clashes between police and protesters following George Floyd's death.

This is the kind of thing I'd expect to see in a war zone or some authoritarian country with weak freedom of the press, not the U.S., at least not this widespread. The silver lining is that it will get the press focused on police brutality now that it is directed against them, not just the protestors and rioters. The bad news is that it could attract media attention away from the people who experience excessive force every day. To its credit, the Washington Post continued to cover that part of the story in D.C. protesters don’t want their voices lost in the chaos.

Before clashes erupted between protesters and police on May 31, sparking a night of chaos across Washington, D.C., there was a third day of mostly peaceful protests outside the White House.

Don't forget that this is the real story of the past week.