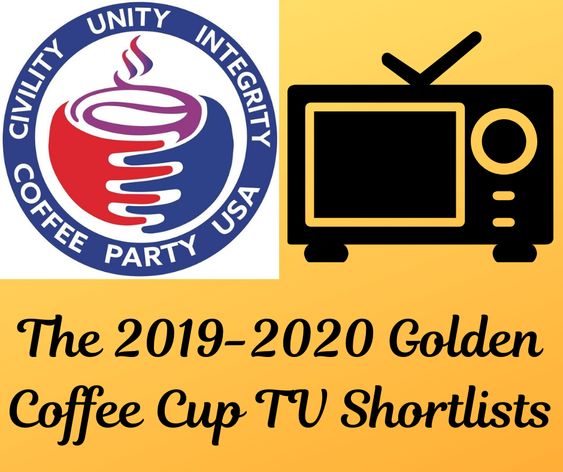 Hey, all of you binge-watching your guilty pleasure shows while staying safe at home, relaxing after working from home, returning for work after wearing a mask all day, or just stressed out from the real world! I have another suggestion to make your time in front of the big-screen TV in the living room, the slightly smaller screen in the bedroom, or even holding your tablet or smartphone work to help your appreciation of politics and government on television and then apply your understanding to help Coffee Party USA in one of our projects.

With the 2018-2019 television season out of the way, the members and volunteers of Coffee Party USA will move on to the 2019-2020 television season. Watch for the posting of the shortlists for the show categories along with an invitation to stream them while staying safe at home. If you want to become one of the voters for this or future Golden Coffee Cups, such as for the best political movies of 2020, become a member. Voting will happen on a members-only Facebook group.

Before I present the shortlists, I'm sharing a two-part activity Coffee Party USA and I are proposing our readers and supporters do.

The first part of the activity is to stream as many of the shows on the shortlists between now and March 13, 2021 to see which have the best portrayals of politics and government on television. The second is to become a member of Coffee Party USA by March 13, 2021, which you can do for as little as $30.00 per year. That's because the members will also vote on the nominees and winners this year. That means you!

That's your two-part activity. Now, have fun watching television while supporting the work of Coffee Party USA, whose core values include continuous learning on behalf of an informed citizenry, joining Coffee Party USA, and voting on the nominees!

Without any further ado, I present the shortlists for the Golden Coffee Cups for Television, beginning with the shortlist for Best Drama Series about Politics and Government.*

Succession won last year and Mindhunter the year before. In addition, the first winner of Best Miniseries or Movie for Television about Politics and Government, Black Mirror, has been moved here based on the reclassification of the series by the Television Academy. The shortlist sets up a situation where they could go up against each other for the trophy. Of course, they have to be nominated first. Will you be one of the people to join so you nominate them and the rest of the field?

Follow over the jump to read the shortlists for television shows in the other four categories along with a two-part activity involving them.

Next, the shortlist for Best Comedy Series about Politics and Government.

American Dad
Archer
Big Mouth
Black-ish
Brooklyn Nine-Nine
Central Park
Dead to Me
Drunk History
One Day at a Time
Orange Is the New Black
Outlander
Ramy
Reno 911!
Saturday Night Live
Schitt's Creek
Space Force
The Great
The Marvelous Mrs. Maisel
The Politician
What We Do in the Shadows

Saturday Night Live won last year. Will it repeat? I'd bet money on it. What shows will it compete against? That's up to the members of Coffee Party USA.

Now, the shortlist for Best Miniseries or Movie for Television about Politics and Government.

If I hadn't reclassified Black Mirror, it would be the one series with a chance to repeat. Instead, it's Emmy winner Watchmen that I think is the favorite. Will it even be nominated? Again, that's up to you, should you join.

The last shortlist for scripted series and movies is Best Comedy, Drama, Miniseries, or Movie for Television about Fantastic and Futuristic Politics and Government.

The Man in the High Castle won last year and Marvel's Agents of S.H.I.E.L.D. won the year before that, setting up a showdown between the two for their final seasons. Again, that's up to you.

Last Week Tonight won last year. Whether it repeats is up to you, the reader.

I close with a category I'm proposing for this year, Documentary, Nonfiction, or Reality Series about Politics and Government.

Do you want this category or one that recognizes actors portraying government officials or activists? That's going to be the first question I ask the members of Coffee Party USA. If you want to help me make the decision, join!

Coffee Party USA ia a 501c(4) nonprofit social welfare organization dedicated to empowering and connecting communities to reclaim our government for the people. To support its efforts, which include educating the public on our website and on our Facebook page, registering people to vote with our partners TurboVote and National Voter Registration Day, and reminding them to vote through our Voter Buddy program, please consider donating. A donation of $11.00 for eleven years of Coffee Party USA is recommended. Ten dollars will buy our partner stamp with Stamp Stampede to stamp money out of politics. For those who wish to give at a higher level of support and be more involved in the organization, please consider becoming a member, which will allow you to vote for future Golden Coffee Cup nominees and winners. To do the valuable work of the Coffee Party, volunteer. Not only will Coffee Party USA thank you for it, so will our democracy!

Modified from the original at Coffee Party USA's blog.
Posted by Pinku-Sensei at 12:45 AM