Television nominees about politics and government at the 2021 Golden Globes

It's been two weeks since I wrote "stay tuned for my reaction to the Golden Globe nominations." While I did use the Golden Globes to compile the 2019-2020 Golden Coffee Cups TV shortlists, I don't feel that counted, so I'm sharing Golden Globes 2021 Nominations & Predictions - Television from Grace Randolph of Beyond The Trailer followed by my opinion of the political and government shows among the nominees. Take it away, Grace!

Those are the nominees that Grace thinks should and will win. Follow over the jump for my opinions, including how well each series fits the themes of politics and government and a comparison to the Critics Choice Awards. After all, I'm an environmentalist; I recycle. 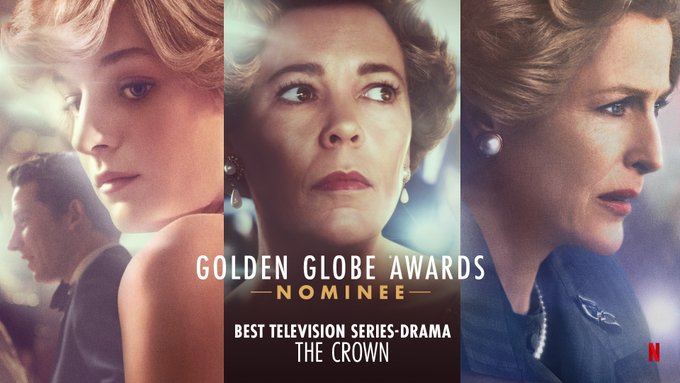 I wrote about four of these already for the Critics Choice Awards.

Both the Galactic Republic and the remnants of the Galactic Empire, which will eventually become the First Order, appear in "The Mandalorian"..."The Crown" continues its dramatization of the reign of Queen Elizabeth II with a new cast... "'Ozark' plays lots of local politics"..."Lovecraft Country"...is very political, being the second speculative fiction program about America's history of racism to use the Tulsa Massacre as a pivotal event after "Watchmen," and encompasses not only horror but science fiction and fantasy as well. "Lovecraft Country" certainly is ambitious!

The one nominee in this category that the Hollywood Foreign Press Association recognized that the Critics Choice Association did not is "Ratched," a prequel series to "One Flew Over the Cuckoo's Nest." As I keep writing, electorates matter. Since "Ratched" takes place in a state psychatric hospital, it is about government in the same way that public school dramas and comedies are, which is enough for me and means all of the nominees are about politics and government.

My pick to win is "The Crown," which twice won the Golden Globe for Best Television Series - Drama. Too bad, as I am rooting for "Ozark."

Once again, time to recycle with substitutions.

Without [Brian Cox] of "Succession," last year's winner...this is a wide open field. While "Ozark" and "The Crown" both have nominees in this category, I'm not sure that match-up between the two most nominated shows is the one to watch. Instead, I expect the nominees to watch are the previous Emmy winners, [Al Pacino] and Matthew Rhys...as Perry Mason. Just the same, I'm rooting for Jason Bateman, even though I don't think he'll win.

The fifth nominee is Bob Odenkirk as Saul Goodman in “Better Call Saul.” As I wrote last month, "'Perry Mason,' like 'Better Call Saul'...is a legal drama, so government and law create the courtroom setting." Add in "Hunters," a nominee for Best Action Series with Pacino nominated for Best Actor in an Action Series at the Critics Choice Super Awards, which is about Nazi hunters and Operation Paperclip, and all of the nominated actors have roles in series about politics and government. All things being equal, I'd say Pacino might be favored over Rhys, but all things are not equal; Pacino couldn't even beat Daveed Diggs for Best Actor in an Action Series!

Time to be a good environmentalist.

As much as I enjoy Laura Linney, enough to root for her...I think Oscar, Golden Globe, and Critics' Choice Award winner Olivia Colman as Queen Elizabeth II is the favorite unless the critics think that Emma Corrin as Diana stole the show.

The other dark horse would be Jodie Comer as Villanelle in “Killing Eve,” a spy thriller. She won an Emmy and has been nominated twice before for the role, so I wouldn't count her out. Once again, all of the actresses have roles in series about politics and government.

My comment for the drama nominees is "My personal pick is two-time Emmy winner Julia Garner from 'Ozark,' but she faces really tough competition from the rest of the field, especially Gillian Anderson of 'The Crown.' I wouldn't count out any of the rest of the field..." This includes Anne Murphy from "Schitt's Creek," the one nominee from a comedy series in the field. 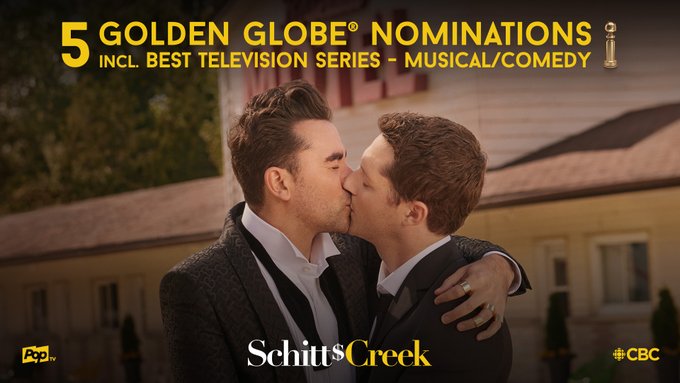 Time to recycle from 'Schitt's Creek' and 'What We Do in the Shadows' — funny and fantastic local politics in most nominated comedy series at the Critics Choice Awards.

"Schitt's Creek" concentrate[s] on family dynamics...as comedy...but politics and government contribute important, if secondary, plot elements. The Mayor of "Schitt's Creek" is an important supporting character and the female lead, Catherine O'Hara as Moira Rose, runs for town council and wins the seat...

"What We Do in the Shadows"...started out with the vampires trying to take over Staten Island by influencing the borough council, but that backfired. There is also a lot of political intrigue and comedic conflict among different factions of vampires with other fantastic creatures, particularly werewolves, so the show has a lot of fantastic politics.
...
[L]aw enforcement plays an important role as secondary antagonists in "The Flight Attendant," which succeeds as both a thriller and a comedy without being a parody of the thriller genre..."Ted Lasso" [is not] particularly political in any conventional manner, although [it] feature[s] a lot of family and workplace dynamics.
...
"The Great"...portrays the story of Empress Catherine the Great of Russia as a comedy.

The one series I haven't commented on before is "Emily in Paris," although Ashley Park did earn a Critics Choice Award nomination for Best Supporting Actress in a Comedy Series, so I mentioned it briefly. It's also not political.

Now to recycle my pick.

As for which show I expect will win, the easy choices are the two most nominated, “Schitt’s Creek” and “What We Do in the Shadows.” Of the two, I think the advantage goes to "Schitt's Creek," which won Outstanding Achievement in Comedy at the TCA Awards and Outstanding Comedy Series at the Emmy Awards. "What We Do in the Shadows" is the obvious second choice, but "Ted Lasso," which was a consistent pick in The top TV shows of 2020 according to IGN, WatchMojo, and IMDB could upset both.

Next, the comedy actor nominees.

"Ramy"...examines the experiences of an immigrant community composed of Muslims, a religious minority in the U.S. That can't help but be political.
...
Nicholas Hoult deserves the nomination, but his awards record is not as stellar as his competition. Speaking of whom, Ramy Youssef won a Golden Globe and earned an Emmy nomination for this role, Jason Sudeikis could upset the field, and Eugene Levy won the Emmy.

My recycled opinion is "I'm supporting and expecting Catherine O'Hara to win." 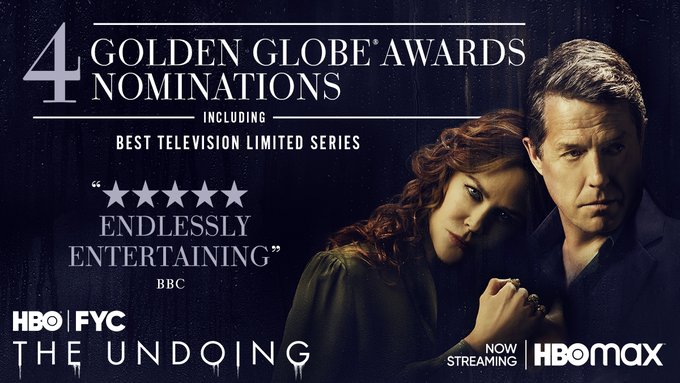 Now time to recycle from a new source, especially because I've written about all the nominees before.

"Small Axe" [is] British, but examine[s a] political issue that affect[s] Americans, the immigrant experience...I'll let IMDB describe "The Undoing": "A modern twist to a classical 'whodunnit' tale, when the life of a wealthy New York therapist turns upside down after she and her family get involved with a murder case." Government intervenes in the form of the police. Both "Unorthodox" and "Normal People" feature relationship drama, but the former also shows the experiences of an immigrant — from U.S. to Germany — that's a twist!

"Unorthodox," [a] nominated limited series with [an] Emmy win, [has] a chance at winning. However, [its] main competition [is a] show...that aired after the eligibility period for last year's Emmy awards... “The Queen's Gambit,” [which] appeared consistently in The top TV shows of 2020 according to IGN, WatchMojo, and IMDB, so I think it's actually the favorite, not “Mrs. America”...or "Unorthodox." If I'm right, sports, in as much as chess is a sport as well as a game, will beat politics.

I'm not as sure about that prediction for the Golden Globes as I am for the Critics Choice Awards, because "The Undoing" has more nominations than any other limited series or TV movie, so I think it could be the favorite over "The Queen's Gambit."

Best Performance by an Actor in a Limited Series or a Motion Picture Made for Television
Bryan Cranston, "Your Honor"
Jeff Daniels, "The Comey Rule"
Hugh Grant, "The Undoing"
Ethan Hawke, "The Good Lord Bird"
Mark Ruffalo, "I Know This Much is True"

There are two nominees I haven't mentioned before, "The Comey Rule" and "Your Honor," both of which are about politics and government. "The Comey Rule" is a docudrama about the early days of the Trump Administration, when Trump ended up firing James Comey. I let IMDB decribe "Your Honor."

A judge confronts his convictions when his son is involved in a hit and run that embroils an organized crime family. Facing impossible choices, he discovers how far a father will go to save his son's life.

Time to recycle the IMDB description of "The Good Lord Bird."

Ethan Hawke stars as abolitionist John Brown in this series based on the novel. "Onion" is a fictional enslaved boy who becomes a member of Brown's family of abolitionist soldiers and finds himself in the 1859 raid at Harpers Ferry.

I'll also recycle my prediction: "I think Mark Ruffalo who won for Outstanding Lead Actor in a Limited Series or Movie [at the Emmy Awards] is the most likely winner, followed by Hugh Grant."

Once again, time to recycle.

While I want Cate Blanchett to win, even though I dislike her character along with the real person she's based on, she has a lot of very stiff competition in Anya Taylor-Joy... Shira Haas, and [Nicole Kidman]. I think Daisy Edgar-Jones should just be happy to be nominated. On the other hand, I suspect Anya Taylor-Joy will win.

Now for the final category, where actors in limited series shine.

Grace thinks it's between Daniel Levy and Brendan Gleeson, but I wouldn't count out Jim Parsons for his role in "Hollywood." The entertainment industry likes a good show about itself. That written, I'm rooting for Levy.

I plan on writing about the movie nominees, although I haven't decided whether that's tomorrow or later next week. In any event, stay tuned.
Posted by Pinku-Sensei at 7:50 PM