Politics, government, and diversity among movie nominees at the 2021 Golden Globes

When I told my readers "I plan on writing about the movie nominees, although I haven't decided whether that's tomorrow or later next week" at the conclusion of Television nominees about politics and government at the 2021 Golden Globes, I was pondering whether to do that or write about another awards show, such as the Critics Choice, WGA Awards, or finish my Emmy series for Black History Month. I then remembered that the Golden Globes will be the first awards given out on February 28th, so I'm prioritizing writing about them today for the Sunday entertainment feature. Watch as Grace Randolph of Beyond The Trailer shares her opinions in Golden Globes 2021 Nominations & Predictions. Take it away, Grace!

Those are the nominees that Grace thinks should and will win. Follow over the jump for my opinions, including how well the nominated movies fit the themes of politics and government, how diverse the acting nominees are, and whether I agree with Grace about the likely winners. 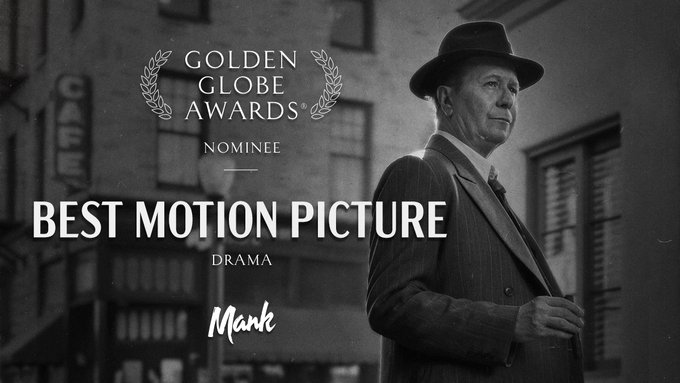 As Grace notes, "Mank" has more nominations than any other film, six. It also is a story about Hollywood, which, all other things being equal, makes it the favorite because Hollywood loves good show about itself. It will probably be enough for "Mank" to win this category at the Golden Globes and earn lots of nominations at the Oscars, making it the favorite there, too. However, when Grace mentions that it includes politics, it's mostly the politics of Hollywood and the movie industry, not the politics that influences government. "The Trial of the Chicago 7" covers that, and it has the second most nominations of any motion picture, five. The other three movies in this category have four nominations each. They all explore social issues, especially "Nomadland," which IMDB describes as "After losing everything in the Great Recession, a woman embarks on a journey through the American West, living as a van-dwelling modern-day nomad." That movie looks more like a documentary than a scripted drama. Speaking of "Nomadland"... 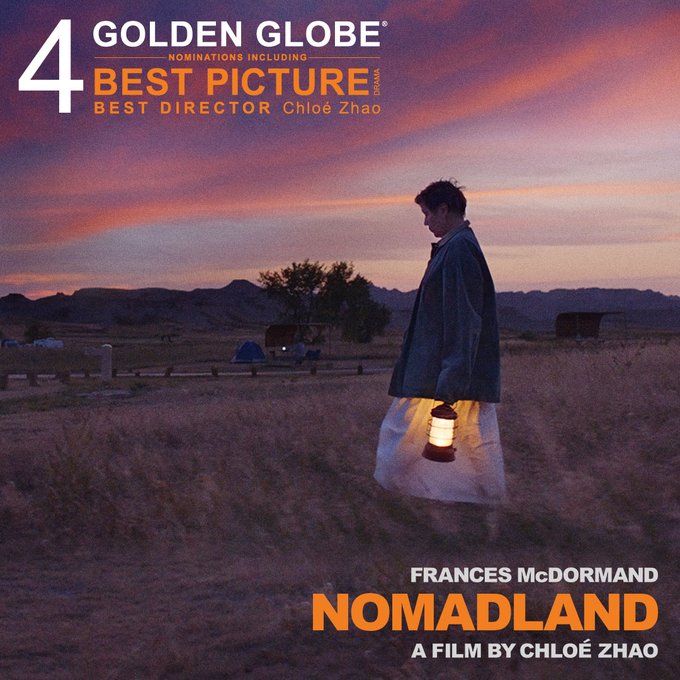 Based on the IMDB description, "The United States vs. Billie Holiday" has the most politics and government content, as the film "Follows Holiday during her career as she is targeted by the Federal Department of Narcotics with an undercover sting operation led by black Federal Agent Jimmy Fletcher, with whom she had a tumultuous affair." "Ma Rainey's Black Bottom" also explores social and political issues within entertainment, as IMDB summarizes the film as "During a recording session, tensions rise between Ma Rainey, her ambitious horn player and the white management determined to control the uncontrollable 'Mother of the Blues'." Both feature diverse nominees as well as depicting African-American perspectives on their respective eras. That written, I agree with Grace that it's between Carey Mulligan and Frances McDormand for this award. 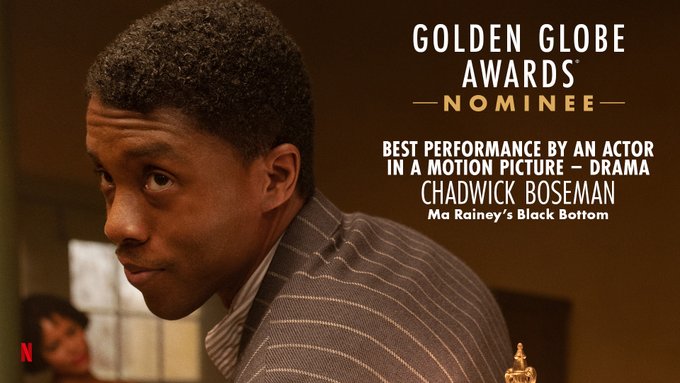 IMDB describes "The Mauritanian" as "Mohamedou Ould Salahi fights for freedom after being detained and imprisoned without charge by the U.S. Government for years," so it has the most political and goverment content of all the films with nominated actors in this category. That written, while the nominations for Tahar Rahim and Riz Ahmed are important for diversity, they aren't likely to win. I think it's between Chadwick Boseman, Grace's pick, and Gary Oldman; as much as Grace dumped on his performance, the Hollywood Foreign Press Association might vote for him anyway. Anthony Hopkins is a great actor, but I'm not sure this is his best performance. 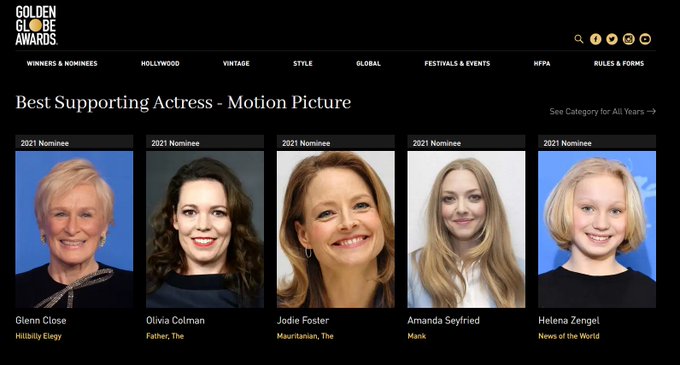 The three biggest names in this field are Glenn Close, Olivia Colman, and Jodie Foster. Grace expressed her cynicism about the Hollywood Foreign Press Association when she said that Close and Colman would only win this award if the HFPA couldn't help themselves. On the other hand, she thought Foster, Amanda Seyfried, and Helena Zengel deserved the award. She wants Seyfried. I'm rooting for Foster, the nominee from the most political movie with a nominee in this category. 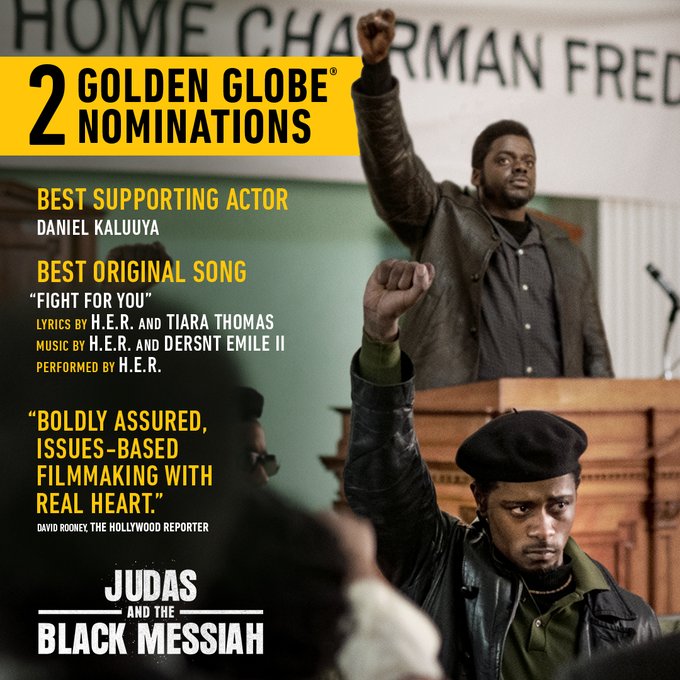 Best Performance by an Actor in a Supporting Role in any Motion Picture
Sacha Baron Cohen, “The Trial of the Chicago 7”
Daniel Kaluuya, “Judas and the Black Messiah”
Jared Leto, “The Little Things”
Billy Murray, “On the Rocks”
Leslie Odom Jr., “One Night In Miami”

Fortunately for the theme of this entry, Grace's top three choices come from the three most political films, Sacha Baron Cohen for “The Trial of the Chicago 7,” Daniel Kaluuya for “Judas and the Black Messiah,” and Leslie Odom Jr. for “One Night In Miami.” Out of the three, Kaluuya is not only Grace's favorite, but also had the best promotional image on Twitter, so I used it. 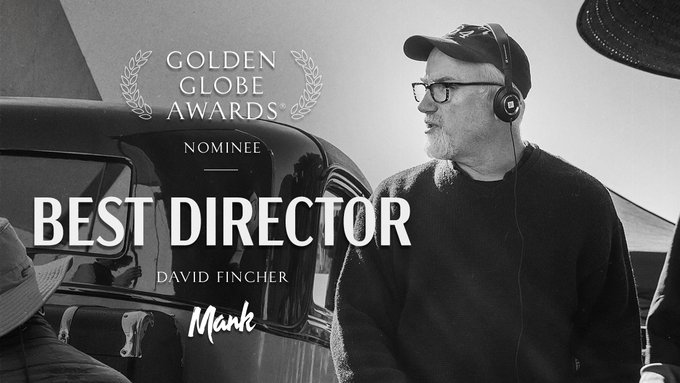 Grace thinks it's between David Fincher and Chloé Zhao with Fincher favored. I agree. 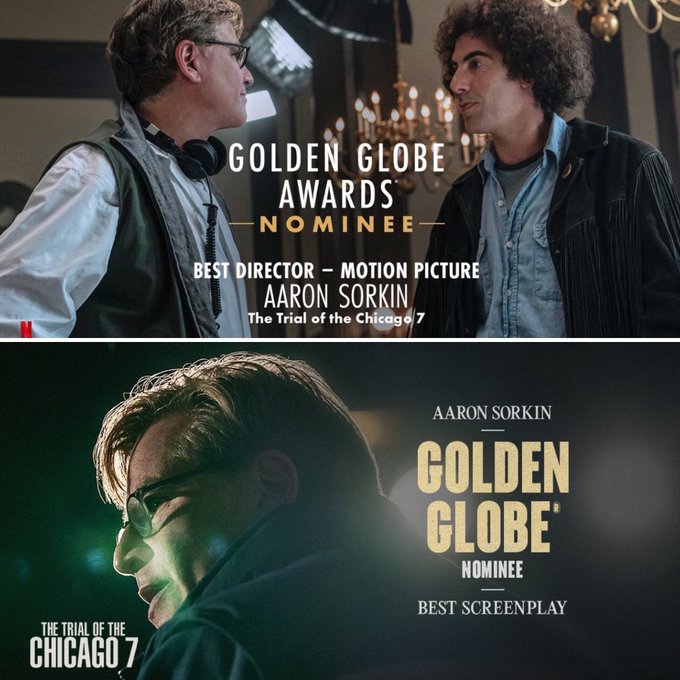 The best overall screenwriter is probably Aaron Sorkin, although I think he's a little too in love with his own opinions. Just the same, Grace and I agree he's the most likely to win, followed by Jack Fincher for "Mank." 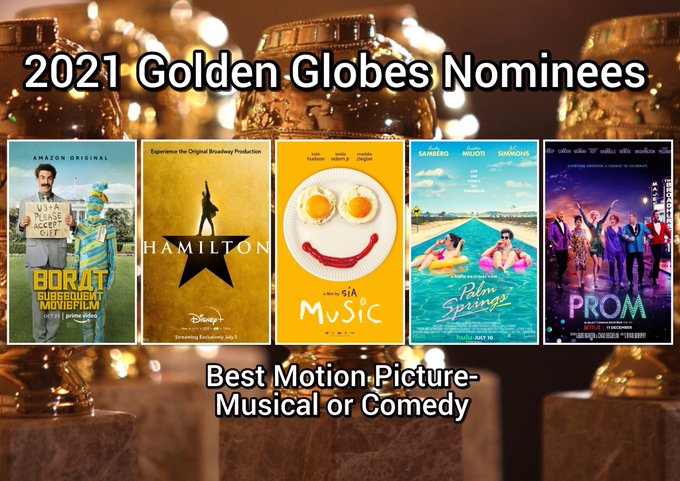 "Borat Subsequent Moviefilm" has both the most nominations of any movie in this category, three, and the most current political content, including a really memorable prank on Rudy Giuliani. As Grace says, it could very likely win, as much as she thinks "The Prom" deserves it more. However, I'm rooting for the other political comedy or musical, "Hamilton," the winner of two People's Choice Awards. I predicted then that "I expect the show will be nominated for...a Golden Globe or two" and the HFPA proved me right. 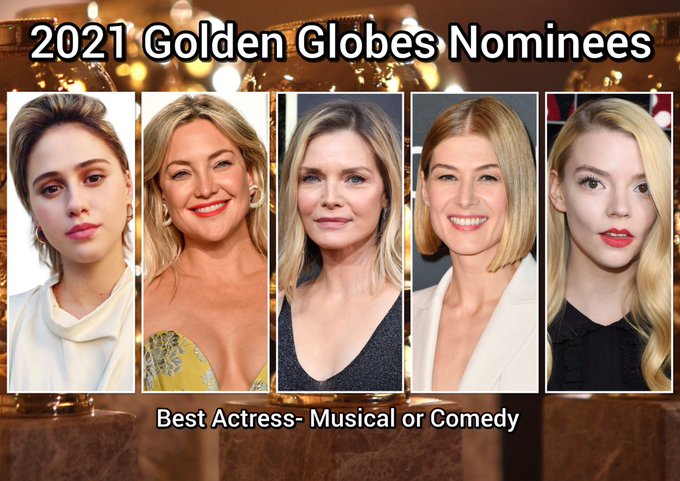 The two actresses Grace tagged as likely to win, Maria Bakalova and Rosamund Pike, happen to act in the movies most about politics and government. In addition to the mean-spirited political pranks in "Borat Subsequent Moviefilm," "I Care a Lot" is a crime caper, which means the police are involved. Of the two, I'm rooting for Pike. I've been a fan of hers since she starred in the Bond film "Die Another Day." 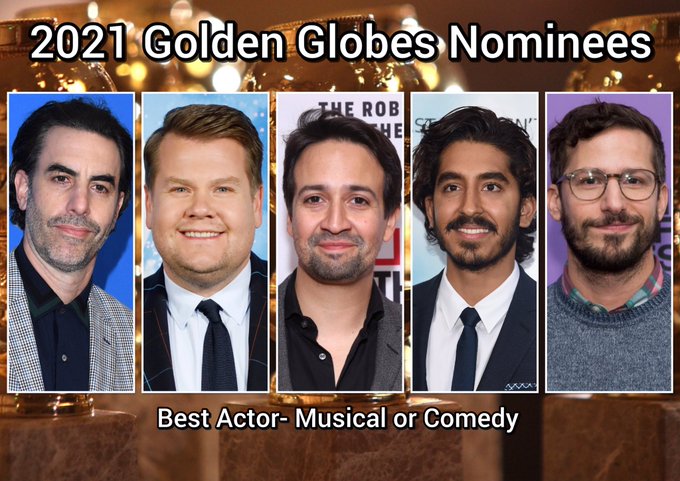 Grace just can't hide her disappointment with this field, but she settles on Sacha Baron Cohen as the likely winner. I'm personally rooting for Lin-Manuel Miranda as Alexander Hamilton so he can have a Golden Globe to go along with his People's Choice Award, but I learned long ago not to count out James Corden. The man has talent. 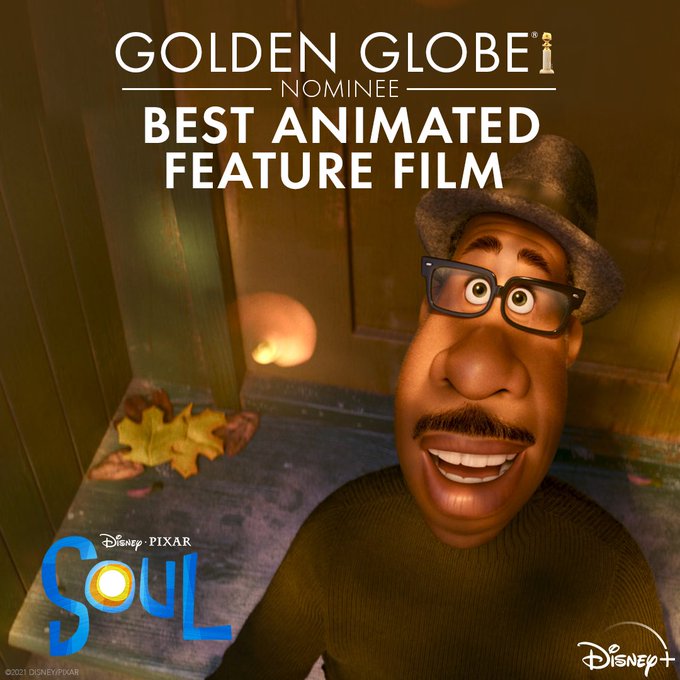 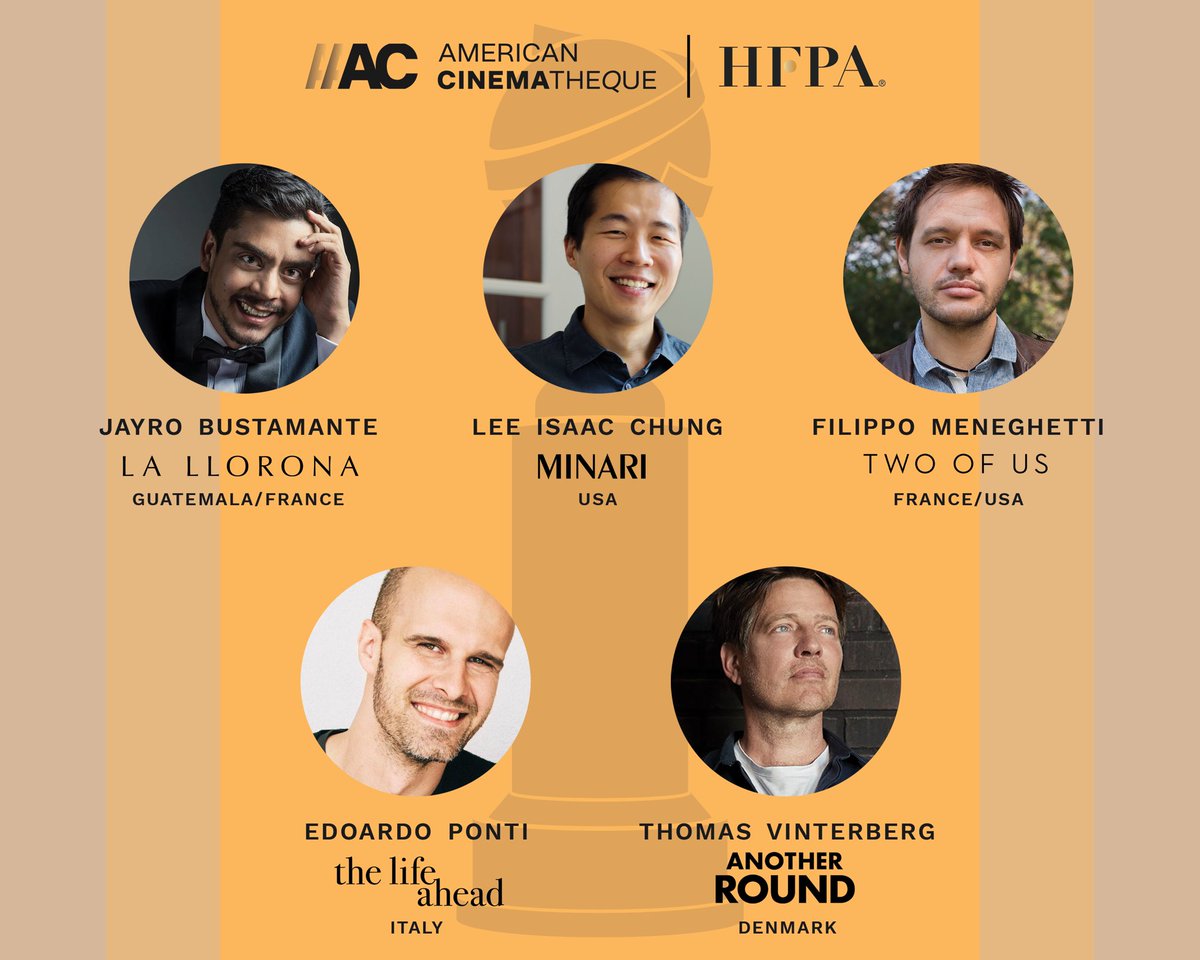 Best Motion Picture, Foreign Language
“Another Round”
“La Llorona”
“The Life Ahead”
“Minari”
“Two Of Us”

The films about politics and government are "Another Round," about four drunken high school teachers, "La Llorona," a horror film about a war criminal, and "The Life Ahead," about a Holocaust survivor who takes in a street kid. Out of the three, Grace thought only "The Life Ahead" had a good chance of winning. Personally, I'm torn between "La Llorona" and "Minari," the former because of its horror theme and the latter because its lead actor played in "The Walking Dead." 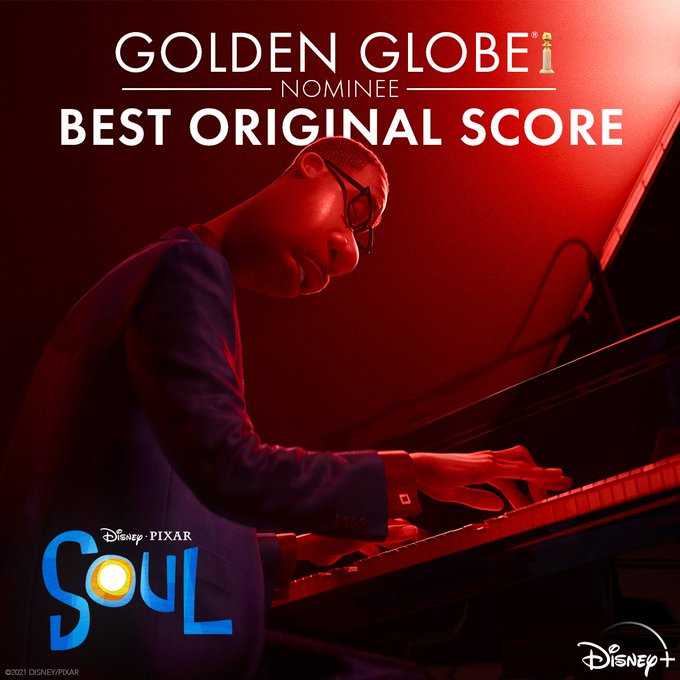 Grace thinks this award will go to "Soul." I'm enough of a musician that I won't trust her judgment, but my own. Since I haven't listened to the scores yet, I'm sharing Grace's choice, Music of Soul | Disney and Pixar's Soul | Disney+.

About Soul:
What is it that makes you...YOU? This Christmas only on Disney+, Pixar Animation Studios’ all-new feature film “Soul” introduces Joe Gardner (voice of Jamie Foxx) – a middle-school band teacher who gets the chance of a lifetime to play at the best jazz club in town. But one small misstep takes him from the streets of New York City to The Great Before – a fantastical place where new souls get their personalities, quirks and interests before they go to Earth. Determined to return to his life, Joe teams up with a precocious soul, 22 (voice of Tina Fey), who has never understood the appeal of the human experience. As Joe desperately tries to show 22 what’s great about living, he may just discover the answers to some of life’s most important questions. Directed by Academy Award® winner Pete Docter (“Inside Out,” “Up”), co-directed by Kemp Powers (“One Night in Miami”) and produced by Academy Award nominee Dana Murray, p.g.a. (Pixar short “Lou”), Disney and Pixar’s “Soul” is streaming only on Disney+ beginning December 25.

The video certainly advocates for the soundtrack. 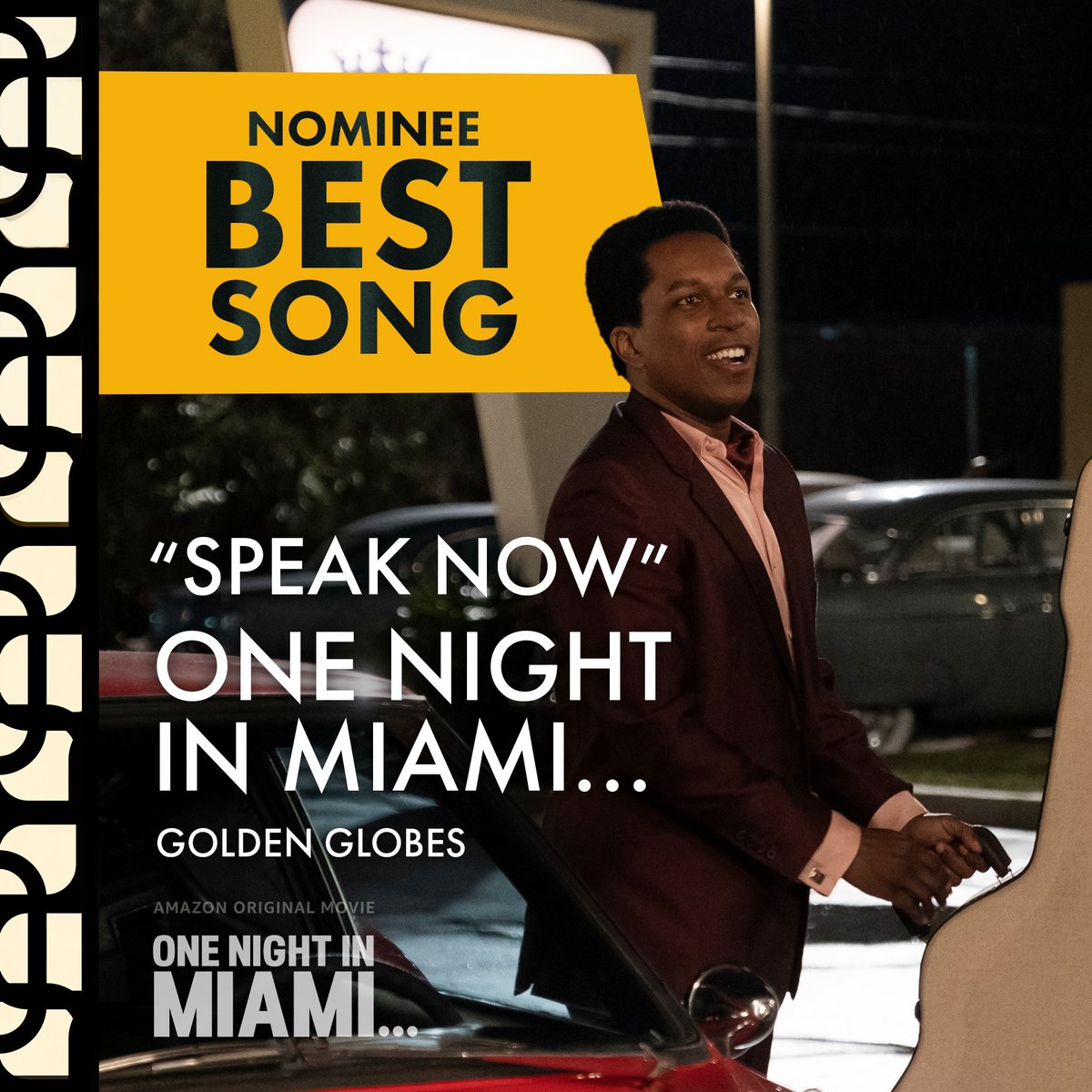 Best Original Song, Motion Picture
“Fight For You,” “Judas and the Black Messiah”
“Hear My Voice,” “The Trial of the Chicago 7”
“Io Sì (Seen),” “The Life Ahead”
“Speak Now,” “One Night In Miami”
“Tigress & Tweed,” “The United States Vs. Billie Holiday”

Again, I'm enough of a musician that I won't trust her judgment, but my own. Since I haven't listened to the scores yet, I'm sharing Grace's choice, Speak Now.

That is a pretty and moving song, so I can see why Grace likes it.

That was a lot of work. I'll tackle something easier tomorrow, like the Emmy Awards. Stay tuned.
Posted by Pinku-Sensei at 4:26 PM