Facebook had a very bad 24 hours beginning with a "60 Minutes" interview Sunday night and all day yesterday. Stephen Colbert summarized it as comedy in Facebook's Bad Day: Whistleblower's Claims Go Viral Before Global Outage Takes It All Down.

Stephen investigates the worldwide outage at Facebook, WhatsApp and Instagram, which came one day after dark corporate secrets were revealed by a company whistleblower.

I'm with Stephen. As appalling as Facebook's conduct has been, it shouldn't be surprising. "Are you telling me a corporation chose money over the safety of consumers?" Of course it did, which is why it needs more regulation. At least Twitter was having a good day yesterday at Facebook's expense, just like Stephen.

Stephen showed clips from "60 Minutes." Here is the clip of the interview broadcast on Sunday night, Facebook Whistleblower Frances Haugen: The 60 Minutes Interview.

I have been critical of Facebook ever since I wrote Facebook: There is no such thing as a free lunch ten years ago, so while I'm appalled, I'm not surprised. That's when I first used the following meme. 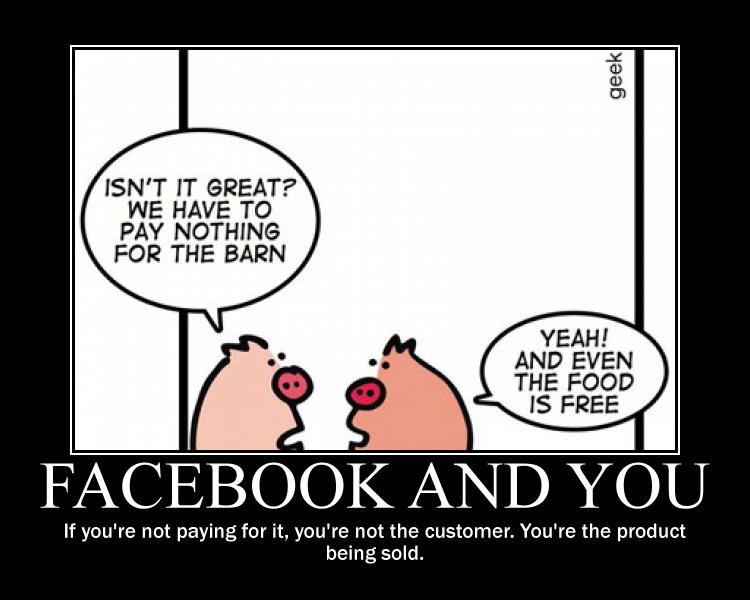 By the way, Facebook's bad 24 hours will become a bad 48 hours, as Haugen will be testifying before the Senate today. MSNBC covered that in Facebook Whistleblower: They Put Profits Over Safety.

Facebook had an hours-long outage the day before a whistleblower, who is alleging the company of behaving dangerously, is set to testify to a Senate panel. We discuss with Kara Swisher, Philip Rucker, and A.B. Stoddard.

Haugen's testimony should be interesting. Stay tuned.
Posted by Pinku-Sensei at 9:05 AM