Colbert talks 'Peril' with Woodward and Costa after winning an Emmy

I ended 'Last Week Tonight with John Oliver' examines voting rights after winning three Emmy Awards by telling my readers to "Stay tuned" because "that was one of the funnier 'winnerviews' so far. Let's see if ones for Stephen Colbert and 'Ted Lasso' can outdo this one." We'll see, but only after watching Stephen's Show Won An Emmy! But Our Democracy Is Still In Big Trouble.

Proudly clutching The Late Show's new Emmy statue, Stephen looks back at his acceptance speech, then looks ahead to his conversation with Bob Woodward and Robert Costa about the revelations in their book, "Peril."

I found Colbert's interview with Woodward and Costa important enough to embed all three clips, beginning with "A Secret National Security Crisis" - Woodward & Costa On The Hair-Trigger World Post-Election.

The authors of "Peril," Bob Woodward and Robert Costa, tell Stephen some of the most shocking details they uncovered about the previous president's maneuvers in the months following the 2020 election.

Woodward and Costa move to the present and future in The Big Lie Is "Not Some Passing Storm, It's The Climate In The Republican Party" - Robert Costa.

Robert Costa, co-author with Bob Woodward of the book "Peril," points out that the GOP has largely embraced the previous president's lies about election fraud and have no political will to oppose him.

Personally, I'd rather call it Trump's dangerous delusion, his fixed belief that the election was stolen from him despite all evidence, which I see as related to his vulnerability to conspiracy theories, but "the Big Lie" is the established phrase used by CNBC and others, so I'm calling it that instead. It's a lie, too.

Costa's comments demonstrate once again that Trump's delusion is not just dangerous but contagious.

Bob Woodward and Robert Costa spoke to many sources on deep background for "Peril," and they found Gen. Mark Milley to be the only brave person in the former president's orbit in the time between the election and President Biden's inauguration.

I'm glad Milley had a plan and stuck with it.

Follow over the jump for Colbert's acceptance speech and "winnerview." 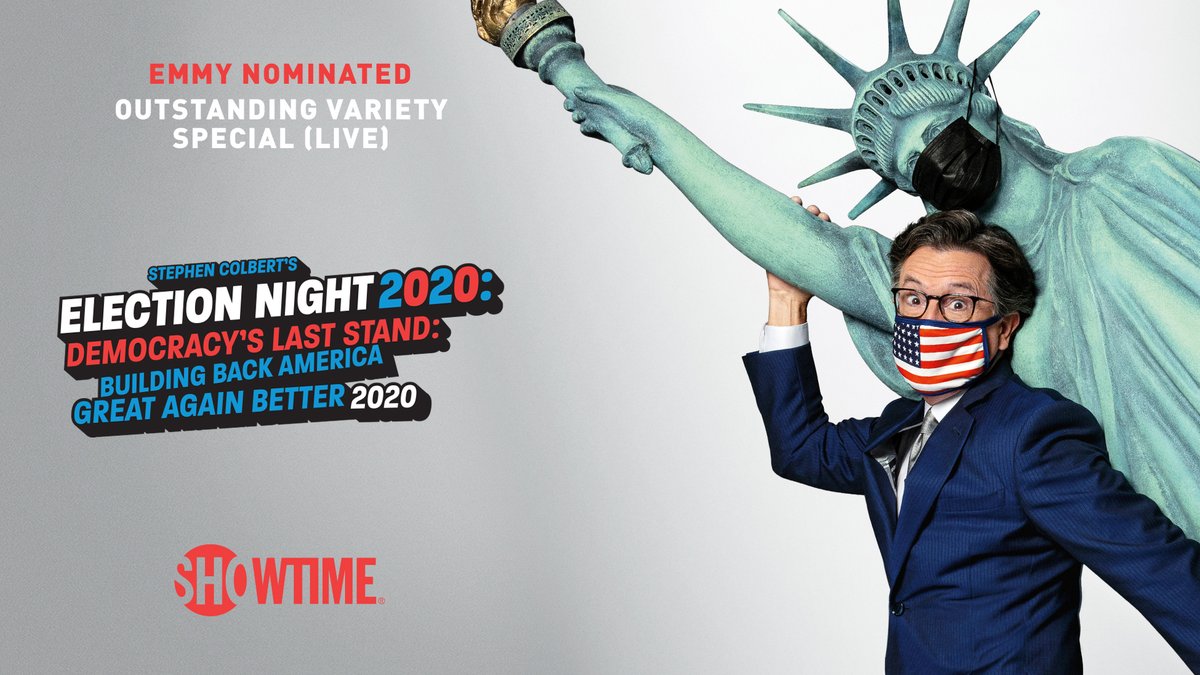 While the two political nominees, "Stephen Colbert's Election Night 2020: Democracy's Last Stand Building Back America Great Again Better 2020" has three nominations and "Celebrating America — An Inauguration Night Special" has two, neither leads nor is likely to be favored. Both "The 63rd Annual Grammy Awards" and "The Oscars" have four nominations while "The Pepsi Super Bowl LV Halftime Show Starring The Weeknd" has three. Based on the history of the award, I think a live event celebrating show business will win, favoring either "The Oscars" which has been nominated every year since the inception of this version of the award, or the Grammy Awards, which has been nominated for three of the four years of the current category. If all things were equal, I'd give the nod to the Oscars, since movies are closer to television than music, but other than the number of nominations, I'm not sure all things are equal. I found the ceremony a bit underwhelming compared to previous years except for the pre-recorded music segments; those were spectacular. If it wins, it will be because it was a minor miracle that it happened at all.

Unlike one of the acceptance speeches for "The Queen's Gambit," that wasn't boring or self-indulgent. Neither was Stephen Colbert: 73rd Emmys Winnerview.

Stephen Colbert and the team from Stephen Colbert's Election Night 2020 talk to Marc Istook backstage at the 73rd Emmy Awards after winning the Emmy for Outstanding Variety Special (Live).

Both the speech and interview were funny, but as much because Conan O'Brian crashed them as for anything Colbert said. That's O.K. Colbert didn't seem to mind at all.

Stay tuned for more on the Emmy Awards, as I'm not done yet.

Previous posts in this series
Posted by Pinku-Sensei at 10:20 AM