Saturday's Women's March for the first Monday in October 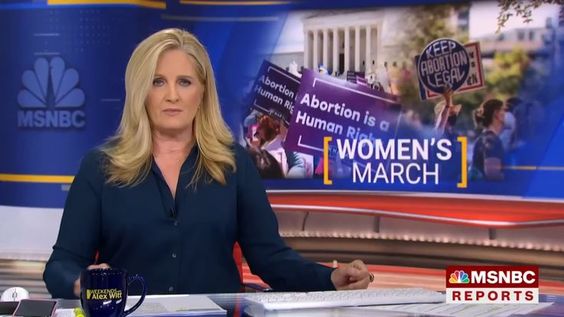 I opened Trevor Noah and Samantha Bee on reproductive rights for today's Women's Marches by noting that "MSNBC reported...Hundreds Of Women's Rights Marches Planned Nationwide Against Texas Abortion Law, but I'm waiting until they're all finished and the news departments of the networks and local stations have digested the story to share videos of the protests." I'm still sharing that video to begin today's entry.

NBC's Stephanie Stanton reports outside of the Texas Capitol where more than 5,000 people are rallying against Gov. Greg Abbot's new law that bans nearly all abortions in the state.

That report focused on Texas, particularly in Austin and Houston, but the important action will took place in Washington, D.C., where the Supreme Court, which begins its session today, will decide on a case involving Mississippi restricting the time period for legal access to abortion. CBS Evening News reported on that demonstration in Thousands gather in D.C. for 2021 Women’s March.

Thousands gathered in the nation’s capital Saturday for the 2021 Women’s March. This year’s march focused on reproductive rights as a response to abortion restrictions implemented in some conservative states. Nikole Killion has more.

Across the country thousands of women rallied for their reproductive rights, becoming the largest women’s marches since 2017. This comes as Texas recently placed a ban on abortions once a heartbeat is detected.

While I find the circumstances distressing, I'm glad this event had the highest attendance since the first Women's March in 2017. The causes needs that level of popular support.

Attorney General Nessel participating in the Washington, D.C., Women's March wasn't the only Michigan angle to this story. Follow over the jump for two reports from the west side of the state.

Crowds gathered on the Blue Bridge in Grand Rapids to share stories on why they chose to attend the event and why they're pro-choice.

I'm sure I'll have more on this issue as it develops. Stay tuned.
Posted by Pinku-Sensei at 9:51 AM