No one expected Pope Palpatine to retire! 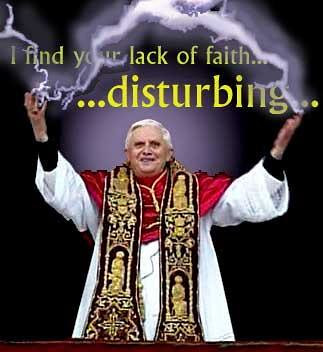 The Star Wars fan in me is taking turns being disappointed and relieved that it didn't take Darth Vader to throw him out of office.

Star Wars VI: Return of the Jedi. Darth Vader kills the emperor and saves luke. How the unconscious side, our shadow, may surface and defeat our rational side.

On the other hand, the Monty Python fan in me is pleased that the former head of the Inquisition did something no one expected.


No one expected the Pope to retire!
Posted by Pinku-Sensei at 12:01 AM