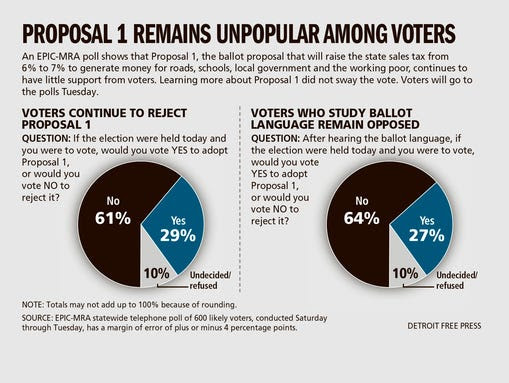 Proposal 1 to raise Michigan's sales tax one percent to fix the state's roads is behind in the polls 61% to 29%.
Image from the Detroit Free Press.


A poll released Friday evening showed that opponents of Proposal 1, which would increase the sales tax by one percent to fund improvements to the state's roads and trigger ten other laws if passed, still outnumber proponents among likely voters in Tuesday's election by more than two to one.  The survey of 600 likely voters conducted by EPIC-MRA found that sixty-one percent of those responding said they would vote against the measure, in contrast to only twenty-nine percent saying they would vote in favor.  Those indicating they would vote no increased to sixty-four percent when the language of the ballot measure was read to them.

The top four reasons those indicating a vote of no gave were that there was too much in the proposal (31%), they were against the tax increase because taxes were too high already (22%), they thought it would be wasteful government spending (13%), and they distrusted Michigan's government, including Governor Rick Snyder (11%).  A majority (53%) of those favoring the proposal said that roads needed repair.  Other reasons included education funding (16%), funding needed in general (6%), and roads, schools, and the rest of state government needed funding (4%).

Continue to stay tuned for the Sunday entertainment entry and the Monthly Meta.
Posted by Pinku-Sensei at 8:00 PM