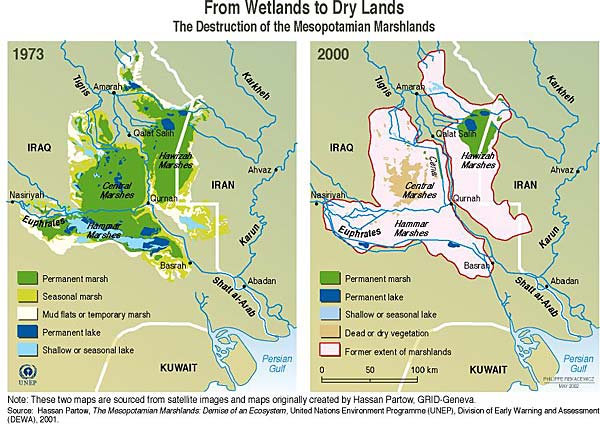 It's been a couple of days since I posted Amur Leopards: student sustainability video festival 36.  Normally, I'd have suspended the series by now, as I submitted grades on Monday, but my students showed so many good videos that I'm continuing the series through the rest of the week.

Thirteen staffers from Nature Iraq's northern office in the Kurdish city of Sulimanyah enjoyed a rare chance this month to join their counterparts on a trip to the endangered marshlands, an area the team has worked hard to protect through a variety of projects over the past five years.

The talk that included this video serves as a rare example of one where I suggested the topic to the student; usually, I let them pick their topics and run with them and that usually produces good and surprising results.  The student who gave her presentation on the marshes of Mesopotamia wanted to do something on Iraq, her native country, but didn't know what.  I told her to look into the Marsh Arabs and what Saddam Hussein did to them and their environment.  She had not heard about that assault on a people through their environment, but she did an outstanding job.  The students and I enjoyed it.

Stay tuned for two more entries on videos from presentations that the students voted their favorites.  Yes, there was a tie.
Posted by Pinku-Sensei at 9:56 AM