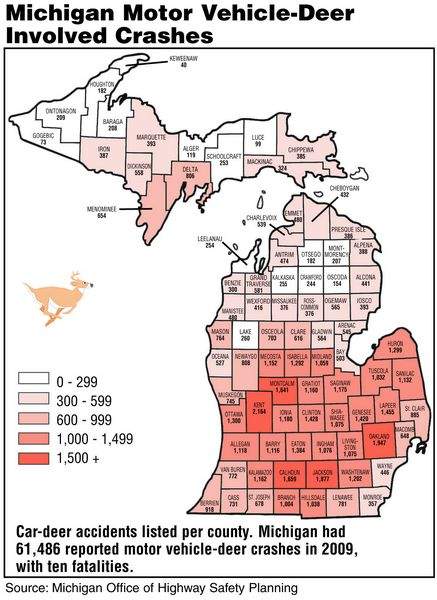 In the spirit of Michigan transportation news from WXYZ, I'm continuing to showcase two local sustainainability stories on a common theme.  Today's clips from WXYZ are connected by being controversial local environmental issues.  They also share being in places important to me and my students.

First, Controlling Ann Arbor's deer population, which takes place in the town I lived in for the first decade I spent in Michigan.

A new DNR report says sharpshooters are the best option for controlling the deer population in Ann Arbor.

My study group leader, herself a former Ann Arborite, has been mentioning this issue since the first of the year.  Now that it has made the news, it has become something I'll mention to my students myself.  In fact, I'll probably do so next week when I talk about public input as an important part of deciding environmental policy.

Culling Ann Arbor's deer herd is marginally more popular than unpopular, but it's still controversial.  On the other hand, Protestors battle against residential oil drilling shows that oil exploration in a residential suburb next to a park is definitely very unpopular.

Residents of Shelby Township took to the street to protest residential oil drilling in their city.

I wonder if this drilling was the result of the sales I described in Oil and gas auction in Oakland County and 20 other counties in Michigan.  I don't know, but I wouldn't be surprised if it is.  It certainly got as much opposition.  At least so far, I haven't had to make good on the prediction I made to conclude that entry.


Stay tuned. I expect to be writing a story like Oil boom in Irish Hills hits close to home about Oakland County some time in the next few years.

As for the park next door to the drilling, it's Stony Creek Metro Park, where I send my students for field trips.  In case the name looks familiar, it's because I mentioned it in Now I have to warn my students about rattlesnakes.  Now I can tell them about the oil drilling, too.
Posted by Pinku-Sensei at 12:00 AM