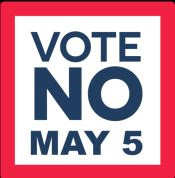 As I predicted twice, Proposal 1 lost.  Here's the article I wrote for Examiner.com dissecting the loss.

The polls predicted that Proposal 1 would lose badly.  It did even worse than expected, although it was not Ann Arbor's fault.

As of 12:22 A.M., the Detroit Free Press reported that 1,332,676 votes against the measure had been counted to 330,764 votes in favor in the statewide tally so far, a loss of eighty percent to twenty percent.  That was an even larger defeat than predicted by the most recent poll, which found twenty-nine percent of those surveyed saying they would vote yes to sixty-one percent saying they would vote no.

More at the link, including the following WXYZ video.

Here's what I had to say on Monday over at Kunstler's blog.

Michigan's Proposal 1 is polling terribly.  The roads are terrible, but the people are not willing to go along with the legislative compromises required to fix them.  Therefore, the potholes I'll be driving over and around on my way to work today will still be there next year.  Meanwhile, marijuana legalization is likely to pass next year.  In a choice between potholes and potheads, Michigan will choose potheads.  I'd rather they do both.