Yesterday was Bike to Work Day

Yesterday was National Bike to Work Day.  In fact, the entire week was Bike to Work (and School) Week.  I'll let The League of American Bicyclists explain.


National Bike Month includes an ever-expanding diversity of events in communities nationwide — but the biggest day of the month is Bike to Work Day. In 2015, Bike to Work Week will be May 11-15, with Bike to Work Day on May 15.

More than half of the U.S. population lives within five miles of their workplace, making bicycling a feasible and fun way to get to work. With increased interest in healthy, sustainable and economic transportation options, it’s not surprising that, from 2000 to 2013, the number of bicycle commuters in the U.S. grew by more than 62 percent.

Hundreds of American communities have been successful in increasing bicycle commuting by providing Bike to Work Week and Bike to Work Day events.

In fact, among the 51 largest U.S. cities, 43 hosted Bike to Work Day events in 2010. The City of Denver reported the highest rate of participation with one out of every 28 adults participating in its 2010 Bike to Work event. That effort makes a difference: Many people who participate in their Bike to Work Day promotion as first-time commuters become regular bike commuters.

But Bike Month is more than one day — or week! From fashion shows to group rides, local groups find unique ways to celebrate their diverse bike cultures and community pride.

I didn't find out about Bike to Work Day until I was already on the road yesterday, so I didn't participate, but it looks like it's a growing event.  Follow over the jump for how San Diego and Detroit have observed it, along with coverage of Detroit's own cycling event, Slow Roll.

KPBS explains the point of Bike to Work Day and how it will be celebrated in San Diego in Bike To Work Day: Promoting Cycling As Viable San Diego Transportation Option.

Government leaders have included biking in its climate action plans for San Diego city and the larger region.

San Diego would be a good place for cycling because of its year-round mild climate and people interested in a healthy lifestyle.  I'm just surprised that it rained heavily enough to postpone the event this late in the year.

Detroit is not San Diego, but it's a good cycling town for at least half the year and lots of people already bike to work, as the Detroit Free Press points out in Bike to Work Day is every day for some Detroit cyclists.


"We are already seeing a lot more people getting to work by bike," said Todd Scott, executive director of the Detroit Greenways Coalition and one of the organizers of metro Detroit's Bike-to-Work initiative that will wrap up with a Friday morning breakfast gathering at Capital Park in downtown Detroit.

"Bike to Work Day is about raising awareness that it's a valid means of transportation."

Scott said a related report showed that the number of people biking to work has gone up in Detroit more than any other major city. But he said you don't need statistics to see how commuter biking is increasing in the Motor City.

"Look at that bike rack," he said, pointing to a rack outside a downtown office building on Tuesday. "It's full and there are more bikes locked on parking meters. And it's not even a nice day."

There were organized rides from the suburbs to downtown yesterday.  The map from the Free Press shows the routes. 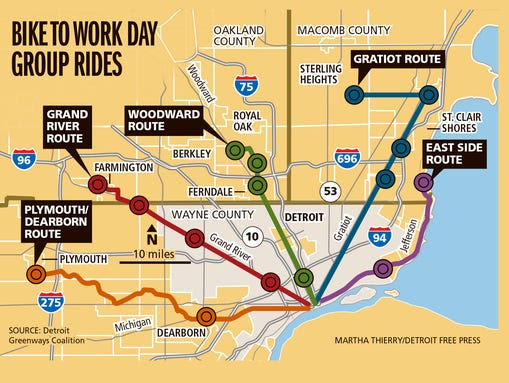 Unfortunately, none of the routes was near me.  Also, I don't commute to downtown, but to two of the adjoining suburbs and yesterday was not one of the days when I worked at either of them.  Finally, I have given up on commuting to work by bike, as I wrote about my habits in one of the first entries of this year.


[T]he new house is in hilly terrain not suitable for bicycling.  That affects my ongoing resolution to buy a bicycle.  I could ride one from my current residence to work, but the landscape and new route to work just makes that impractical.  Sigh.

Still, I can cheer on people who are cycling for work and pleasure.  One of the most notable local cycling events is Slow Roll.  WXYZ explained last month in Slow Roll kicks off this weekend in Detroit.


It looks like Green Cruise every weekend.  I approve.
Posted by Pinku-Sensei at 9:55 AM